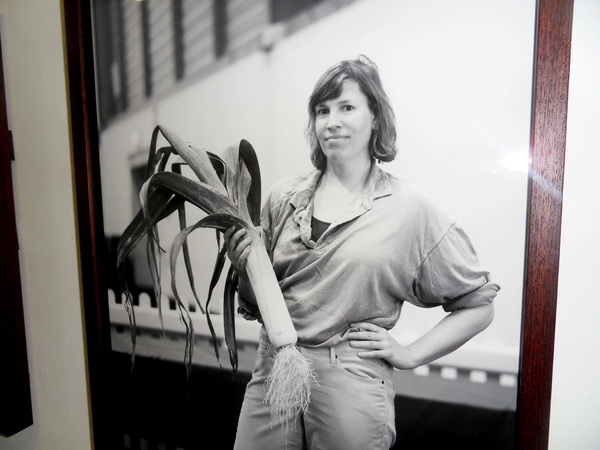 Our recent interview with the curators of Bluecoat’s new exhibition left a fair bit to the imagination. As it should, given that the essence of story-telling is anticipation, and the essence of a joke is the surprise. Now though, the surprise is open to the public, and if launch-night was anything to go by, will be producing belly laughs and cringes for a few months yet.

The star of the show, as tends to be the case with comedy, was both the warm up and close., Kara Hearn, who re-enacts scenes from overdone recognisable films, plays both on common culture, and the inside joke. Making every viewer feel as though they have found a kindred spirit in the artist who acts as they do – the imperfect human. It’s that admission of being imperfect that creates an arena to be funny in; break down the walls and open up your audience’s reservations. And in a lesser sense, who wouldn’t find someone jumping around in a dressing gown with a chopstick pretending to be Anakin Skywalker funny?

The thought-through comedy wins with this exhibition, the work which plays on slapstick, and pain response. And, as you would expect, not every joke is funny, and not all things are funny to the same people. I personally found Sarah Lucas’ work in this show to be an expert failure, something that might have been funny in some way, but simply showed an imperfect person saving their naked dignity with a beer can. In the same way I find Keith Lemon abhorrent, but others think he’s the funniest thing to ever grace our televisions.

And likewise, you might not like waiting for your joke, in which case Maurice Doherty’s waiting to fall might not be your thing, but something about suspense in comedy works for me – knowing what’s coming, but not knowing when. It’s a surprise but a one of natural timing. And the film by Doherty certainly won’t entertain you in any conventional sense, but will certainly keep you captivated if you’re not in a rush.

The one thing that does this exhibition an injustice, but is unavoidable – and in a way a knowing, and very successful, nod to the subject – is that it might not be one that gets revisited much. The Bluecoat have a strength in producing exhibitions that visitors want to see again and again, or that change as their season runs on. Double Act tells a joke once, and once you know the ending, there’s not much incentive to go back. But rather than being a negative, I think it should be taken as a massive success, that the curators have exhibited artists’ jokes with such clarity that they are received in the same way as stand-up.

Think of Michael Macintyre, or John Bishop, both funny at first, and sometimes they come up with new material, but once they’ve run their run, that’s it. There’s no reason to go to the same show twice, not if it’s told well enough in the first place, and Double Act is. I’m only sorry I won’t be able to see it here and in Belfast’s wonderful MAC Theatre, where the exhibition extends as a cross country double act.

It remains up to everyone as an individual to decide on whether they find this exhibition funny, but what the curator have done, regardless of whether this is funny or not is take Art and Comedy, and present an exhibition which cleverly demonstrates themes that sum up the genre, by artists who are considered to be at the peak of that genre. Double Act: Art and Comedy runs until 19th June and will make you reconsider what you might once have called a pretentious field.