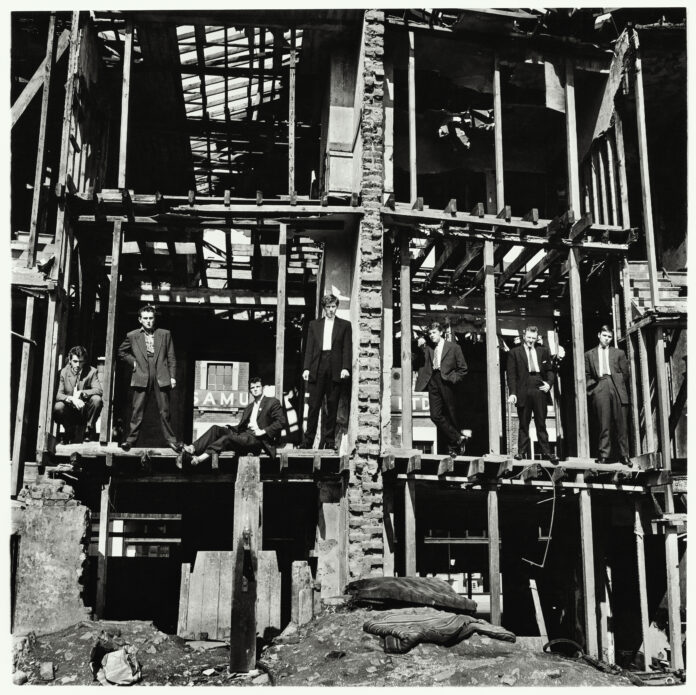 Tate Liverpool’s Don McCullin is perhaps the most challenging exhibition of recent years.

The show is an eye-opening journey through Don McCullin’s life as a photojournalist, one willing, at the expense of himself, to bear witness to the atrocities of his day. It was without fame or publicity in mind that he did this, and the charge of sensationalism is one that couldn’t share the same room as McCullin or any of his images.

Indeed, in his voice and in his lens there is a reluctance and regret. Yet, the burden is a necessary one if these despicable atrocities are not to go unnoticed; McCullin will be the first to admit this nothing compared to the suffering of his photographic subjects.

Trauma follows trauma as we progress through the exhibition space. We begin where he did, with his 1959 The Guvnors, an image of a local London gang.

The image is beautiful, with an artistic composition and rich black tones contrasting in both the shadows and the men’s sharp suits, though the image is much deeper than it seems at first. McCullin only managed to sell the photograph as the men were later implicated in the murder of a policeman, during a trial culminating with the execution of Ronald Harwood in a prison close to McCullin’s home.

What follows is the story of a career as prestigious as it is harrowing. These two characteristics of McCullin’s work share the same bed. Both were birthed from his uncompromising honesty and unwillingness to keel over to injustice no matter the threat.

This honesty led McCullin to his most powerful photos and most traumatic memories, such as Turkish Village, from 1964. Taken in Cyprus during an outbreak of violence between Greek and Turkish Cypriots, after the island gained independence in 1960. In a side note, McCullin recounts his memory of the photo: stood stiff with his camera in the same room as a Turkish newlywed discovering her dead husband, shot in the fighting.

McCullin’s image hides none of Britain’s culpability in this death and in the wider Cypriot conflict. Britain and the US allegedly encouraged the fighting, in order to retain a military foothold on the island, one still around today.

Following Cyprus, his first time shooting a live conflict, is the Congo. To gain entry, he disguised himself as a mercenary. The cruelty he witnessed here is rife in the photographs. One features the mutilated corpse of a man, shot in the face, half buried in rubble.

Then it is Biafra, where emaciation and starvation are seemingly ubiquitous. In one of the images, the sharp cheekbones of a starving albino boy hold two eyes that penetrate the lens. We seem to be as much the subject of the boy’s empty gaze as he is of ours.

McCullin’s abhorrence of complicity, complacency and culpability does not rest throughout the whole exhibition. As with the photo of the starving boy, we the audience are as much a part of McCullin’s photographic project as are those in view of his lens.

Atrocity, injustice, and violence cannot be wished away with ignorance. McCullin knows this. His whole career has been a testament to this fact. This exhibition is the same. Wilful ignorance has nowhere to hide as McCullin forces you to confront the affects and causes of war. Each photograph is like a memory, they all have a depth to them, a story, a condemnation, and a terrible truth. Each are traumatic for a purpose, to force contemplation of those living in the worst of the worst.

McCullin offers us only a little respite from this barrage. After countless images of human angst – in Vietnam, in Northern Ireland, in Cambodia, in Iraq, in Britain – we come to his Landscapes.

These lack the usual animalistic tension, the knife-edge situations that McCullin is so adept at seeking out and capturing. Yet still, they offer us no comfort, no safety.

True, the landscapes portray no starving children or corpses robbed of life. They are images of trees and country scenes, byways and fields. They are well-taken but in no way pretty. Prettiness is not their purpose. Their purpose is more meditative, it gives the eye the immediate breathing space that the previous images allowed them none of. They give us time to process our role, as individual and as country, in the violence.

‘I don’t believe you can see what’s beyond the edge unless you put your head over it; I’ve many times been right up to the precipice, not even a foot or an inch away. That’s the only place to be if you’re going to see and show what suffering really means.’ – Don McCullin

Review: On The Waterfront at Merseyside Maritime Museum