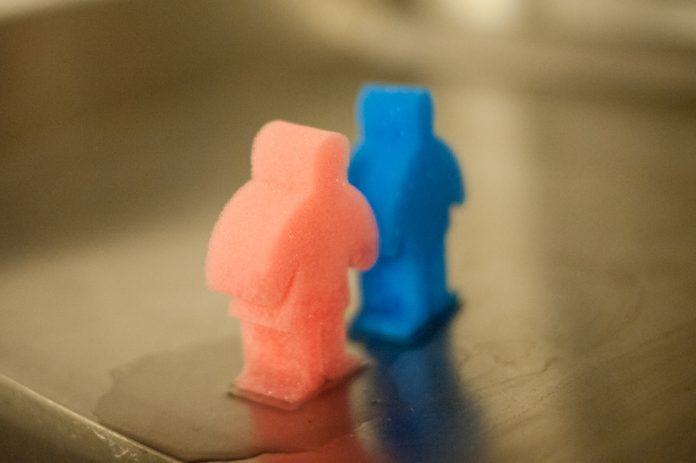 When you hear the expression take a dip, it is not often you think of heading to your local art gallery rather than the recreation centre or the gym.

The small word, Dip, conjures up an array of images, from a quick swim, to leisurely buffets, to children chanting in the playground. Crown Building Studios’ Dip covered all the connotations in one exhibition.

In its most simple form, to dip is to submerge, and you can submerge both physically and metaphorically, leaving one space to then emerge in another. Dip combined the efforts of artists Jemma Egan and Alexander Duncan, who interpreted Dip in their own ways, using swimming pool paraphernalia, food analogies, and household objects.

Unlikely remnants from the sea found their way into the space. Intestinal-looking rubber tubes in Porkies (Egan) dangled from the ceiling, synonymous with transporting liquid to fill up pools, or the typical, inexplicable detritus floating on the surface of the ocean. An earplug fashioned from a whale’s ear bone appeared as Empty Vessel (Duncan & Peter Welsh); the studio director was at pains to tell me this was the most valuable object in the space. I didn’t think to steal it; I just didn’t fancy having a whale’s ear bone on my person. And who would buy one online? One, not two?

In the collaboration The Sponges, dish sponges cut into humanoids hung out near the kitchen sink, a clever site-specific piece using the permanent realia of the gallery to feed into the event, while the floor was carpeted with swimming floats, 31 of them moulded from concrete by Duncan. Being casually laid out on the floor, they helped promote an up close and personal approach to the artworks, generating a relaxed atmosphere in the space.

The physical props provided an excellent backdrop to the video installations sprinkled throughout the venue. The first to catch my eye was Jemma Egan’s Handmadehand, a simple and well-executed video sequence of a hand on a factory-line. Quirkier still was Egan’s Gravy, a video about gravy and chips, which was situated in a skylight, making creative use of the gallery. You look up, you feel submerged. And Duncan’s Staying on Top featured a line-drawing animation produced with James Iles and Tom Barker, which looked into the drown-proofing technique. This was displayed on two tablet devices, which, although ubiquitous, caused an element of intrigue. Such technology used in a traditionally static fine art setting engendered a sense of novelty, and yet the animation was charming and seemingly lo-fi in its simplicity.

The exhibition as a whole was well-executed and well-curated, featuring a variety of media that played on the quirky, the theme removing some of the seriousness of art that galleries often portray. What stood out was the clever use of space within the room, the artworks being enhanced by the unusual and yet natural placement of the objects.

It is becoming commonplace to see shows that incorporate objects that have been appropriated rather than created by the artists. Egan and Duncan mixed it up. Each of the works and objects firmly earning their place within the show, and for the most part, they have made something entirely new.