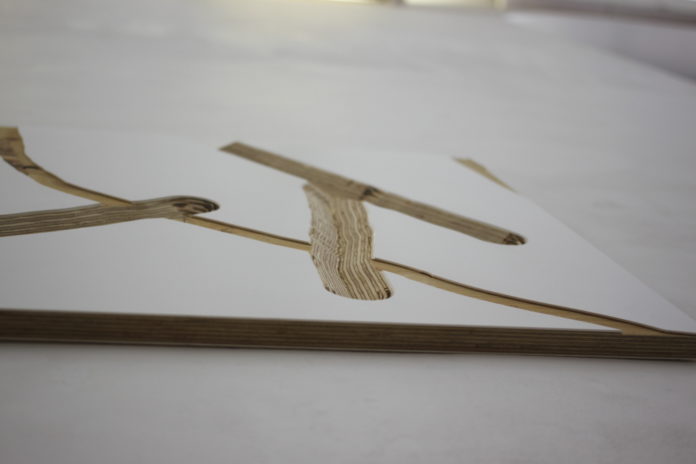 Crossing the threshold into the Creative Campus of Liverpool Hope University I find myself enveloped in an atmosphere of peace and serenity.  Past the clipped buxus and set against rain-laden clouds, an angel sculpture heralds the entrance to Cornerstone Gallery.  So, under this umbrella of tranquillity, I step into The Great Hall of the Cornerstone building, but as I walk clockwise around the exhibition space I realise I am now in a fraught world heightened with dialectical tension.

Destroyed By Shadows presents twelve works created by twelve contemporary artists which challenge the evaluation made by the composer John Cage (1912-1992) in 1961, of the works entitled “White Paintings” (1951) by Robert Rauschenberg (1925-2008): ‘… there is nothing in these paintings that could not be changed, that they can be seen in any light and are not destroyed by the action of shadows.’

A primary goal of the exhibition is to contest the idea that the meaning of a painting resides purely in the artist’s assertion of control and intentions.  This defiance is subtlety made by the fact that none of the works have accompanying labels.  I must confess that as a viewer, this made me feel disconcerted.  I tried to guess what the work might be called and the medium used, and as I asked these questions I felt the shadow of my presence more keenly.  A shadow can be defined as ‘an inseparable companion’, and as I stood before each work I began to understand that this was my role.

The artists also challenge the concept of the picture plane being a purely abstract space and in this I believe they plead their case successfully.  Vicky Wright, for example, starts the exhibition with a painting that initially appears to be a disharmonious array of shapes but take a few steps back, and the physical aspects of a human face becomes apparent.  Facial processing is such an inherent function of the human brain it is present in newborns.  The external reality of identifying a human face in this painting means it can therefore never be ‘purely’ abstract.  Similarly, in the work by DJ Simpson the ply-wood surface is gorged out to varying depths creating an abstract image that is intrinsically reliant on the physical properties of the ‘canvas’ itself; a factor which fundamentally discredits the idea of the picture plane as immaterial.

Conversely, the tactile looking work of John Bunker, who also curated the exhibition together with Michael Stubbs, seems to completely rupture the notion of the need for a picture plane at all.  His mix of materials, including nail files, wire and paper, are seemingly joined as one and directly applied to the wall.  A more ‘traditional’ deconstruction of the surface is reflected in Dominic Beattie’s work which layers images on top of each other as in a red circle seen through the filtered lens of black diagonal stripes.

The passionate reactions demonstrated in the works in response to Cage’s appraisal did what they set out to do, that is they left me questioning the historical legacies of paintings.  Admittedly, this initially made me feel perturbed, but I came to realise that this is a good thing, the shadows cast over an artwork are not destructive but life-affirming, just as the frozen pond I pass on my way out promises a future of hot sunny days.  For these lessons learnt I give my humble thanks to the artists.

Sinead Nunes takes a look at the ARtSense Experiment at FACT