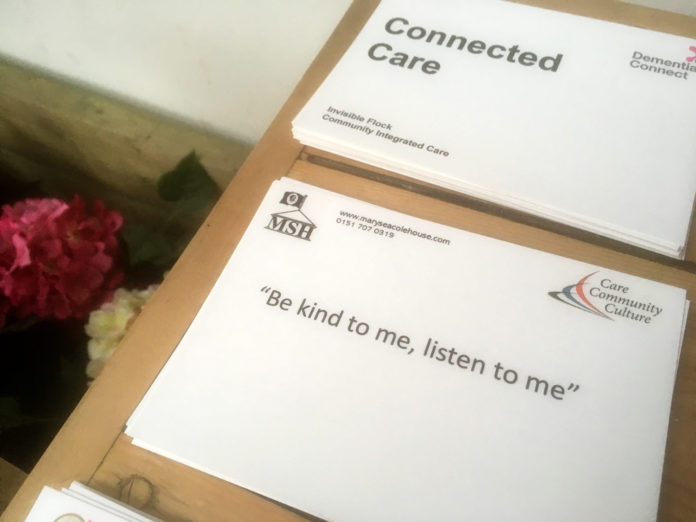 We’re in the Box at FACT. Rows of burgundy sofas. Only a few people scattered around the room. On the cinema screen is a still of a little old lady with an engaging smile and a sparkle in her eyes. She looks lovely, like someone you’d like to have afternoon tea with.

Three musicians are on stage tuning up in front of the screen. All ladies. All dressed in black. I see a Cello and two violins. A couple of cameramen with huge lenses stand quietly to the side.

Everything goes quiet and then…

A man in a black suit and a crisp white shirt arrives, and Introductions are made (the man in black is the composer John McHugh and the ladies are a trio from Liverpool Philharmonic).

Dementia Connect is a project between the University of the West of England, FACT and the Royal College of Arts. It is an extended programme in Dementia arts and the project culminates today which coincides rather beautifully with FACT’s 15th birthday. So, it’s a double celebration.

‘Hidden Voice’ is a project that started out two years ago and has been touring ever since. It is a collaboration with two care homes: Lime House, Warrington and James Nugent Court in Liverpool.  McHugh spent time in both these homes, initially with people living with dementia and then with their carers. He said at the time he wasn’t sure if anyone would want to talk, but it soon became clear that everyone wanted to…there were queues of carers keen to share their stories.

From this came a rich tapestry that he was able to turn into a collection of wonderful haunting pieces of music.

He goes on to explain that the project is broken down into five movements: The first and last focus on people who are living well with dementia; the second around the idea of communication using the story of a son visiting his mum; the third section is around three sisters who meet every week. The oldest sister has dementia. ‘Bessie was a weaver’. McHugh wants to demonstrate that Bessie is a real person first and one with dementia second; And finally, part four is about ‘Alison’ who is dealing with the perception of the loss of her mum, despite still sitting in front of her.

A video showing selected parts of McHugh’s interviews will be shown on the huge cinema screen whilst the musicians accompany it live.

So, onto the show.

We find out that the initial grey-haired lady is 90. And it’s her birthday. ‘So many memories’ she says, ‘Some you remember’…’and some you don’t’. The rhythm is echoed by the violin. ‘My memory isn’t as good as it was’.

The second movement, the story from the son: ‘Such a strange illness’…’but there’s still something in there’. This time McHugh plays a more prominent role on the piano accompanied by deep Cello sounds and lilting violins. Very melancholy but so so touching. A very emotional experience. ‘She recognised me’, ‘A lot of funny moments…. but a lot of sad ones too’ The haunting melody reflects this…I am close to tears.

‘The hard thing for me – she’s no longer my Mum’ says a daughter. This one tears you apart. Really sad pictures and a very slow movement. There is a yearning now for something uplifting. It all feels a bit hopeless at the moment. The lady can’t speak any more, but she can still sing…

Oh, what relief as the optimism returns.

Black and white photos of concert halls, tea rooms, dance halls. The music, more wistful than hopeless ‘Just fantastic’, ‘I wish I was there now’. More piano, more uplifting. A photo of the Grafton Rooms. ‘Different world’… ‘and it lifted you’

And it’s over. 35 incredible minutes. So beautifully crafted taking you through a whole range of emotions and leaving you breathless, but deep in thought. Dementia…it can affect us all, and music is such an important tool in treatment of this strange illness. There is a call for more music to be used in care homes. Discuss.

McHugh tells us that music unpicks the emotion around speech. It makes people ‘sing’, it’s like a truthful opera taking the exact melody and rhythms of the speaker and taking it to it’s highest poetic level.

Interestingly, when you take the melody of an accent you can create a visual picture of where they are from and it is obvious that Hidden Voice is from the North of England.

No stranger to this technique, in 2008 McHugh premiered a piece of music based on the sounds of Liverpool voices. He tells us that the Liverpool accent didn’t come about until the 1890s, going on to say, before that the accent was Lancastrian. Apparently after the Irish came to the City the two accents intermingled to create Scouse. Well, I didn’t know that!

Incredible the power of music…and the melody of speech.