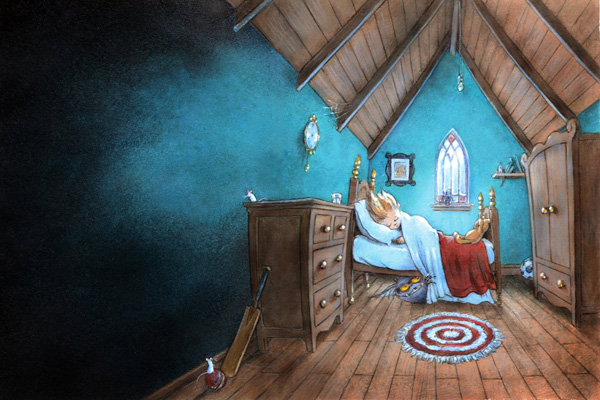 “Darkly Demon lives under your bed,” reads the text scrawled across the wall on entering The Gallery Liverpool, with the warning, “KEEP OUT, Shhhhhhhhhh.” We are immediately immersed into the hilarious, if slightly haunting world of Darkly Demon, the mischievous little thing thought up by D.M. Lever for her new children’s book.

Enright’s illustrations bring this story to life. They are fantastically funny, carefully crafted and delightfully dark visuals for a book that aims to haunt and entertain. All too often the illustrations in children’s books are just hints at the story, but these truly tell it, leading me through the world of Stanley the monster without so much as a hint of text. This is where the exhibition reaches the audience, in its ability to engage with them in storytelling in a way that makes each and every person smile, regardless of their age.

They are the kinds of illustrations you remember in adult life, from tales of Peter Rabbit to Two Monsters, whether it tells a moral tale, or simply entertains, it is a book you want to share with your children, and illustrations of the same power. Enright has clearly understood what she was called on to deliver, and deliver she did, responding to the tale and bringing it to life.

It is important to state as well, the show is not entirely Darkly Demon, but is punctuated by Enright’s other children’s illustrations of equal humour and equal craftsmanship. The artist clearly knows her trade, and has been one to lend her hand to many different styles over the years, creating some truly laugh out loud works from time to time, including the brilliant A Present From Tiddles, 2012. This exhibition shows off her mastery of not just humour though, but of continuity, of dedication, and of storytelling in a challenge I think was quite new to her in this extent.

The book itself is a really whimsical story that plays on that classic childhood fear of the monster under the bed, in a similar way to other recent greats like The Gruffalo and Fungus the Bogeyman. While it’s difficult to understand the power of these texts in most contexts, they are massively influential on the lives of the readers. They teach us to face our fears and not to prejudge. They are tales with a very modern moral premise that resonate through the actions of their readers.

Critically though, they are stories that are imprinted through the images. Images children remember as they grow up, and images that tell a clear tale. Darkly Demon fits the bill for that kind of modern classic – an intricately funny read with a serious message underneath the laughs.

The Role of the Artist: Using the Arts for Social Change