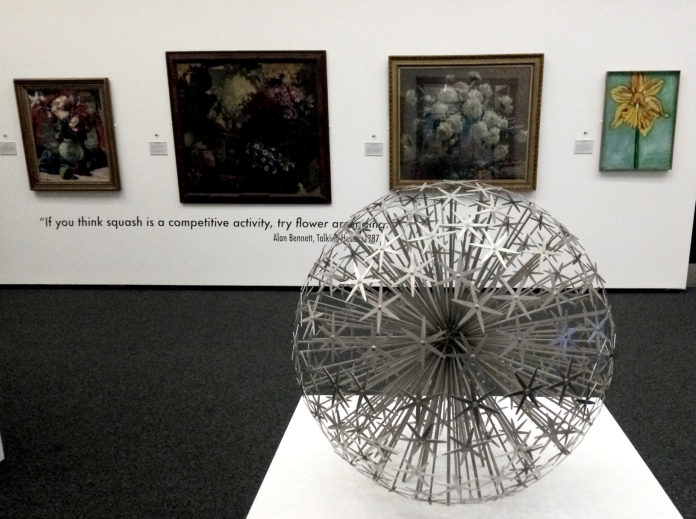 On one of the dreary, wet early June days I took myself off on the train to Southport for my first visit to The Atkinson.  Even the teaming rain couldn’t dampen the impact of this elegant 19th century building, standing on the majestic Lord Street.  Once inside and having found my way up the grand staircase to the “Cross Pollination” gallery it was as if the sun was shining.  The exhibition is a celebration of floral art in many different forms, ranging from 1740 to the present; flowers everywhere, what could be more uplifting?

It was the inclusion of the painters, Ivon Hitchens and Duncan Grant, which initially lured me to the show. And whilst it was a rare treat to see these two contemporaries alongside each other, the added bonus was to be surrounded by so many other artists who were previously unknown to me.

The curator, Stephen Whittle, has done a terrific job in selecting and bringing together a wide cross-section of works from The Atkinson’s own extensive archive as well as others from the Arts Council Collection.  There are also digital works from Sedition Art, an online platform for selling, collecting, or renting art in digital format (www.seditionart.com).  This is a new concept to me, that of building up a visual ‘play list’. Once a work has been purchased it can be viewed on any device, i.e. you can take the artwork with you wherever you go.  In this, it made me think of the idea as the modern version of Duchamp’s Boîte-en-Valise, which were his portable, miniature monographs.

A digital reworking by Gordon Cheung of a 17th century Dutch still life painting is one of the first works one encounters at the Atkinson’s exhibition and you can also see him talking about the advantages of being digitally ‘portable’ on the Sedition site.

There are quite a few contrasts in this exhibition and one of the most startling is between the traditional still life paintings at the beginning and the saturated colours of two works at the far end of the gallery.  These are both from the creative partnership of Tony Heywood and Alison Condie, who describe their work as ‘horticultural installation art’ (www.heywoodandcondie.com).  Their focus is on new ways of engaging with and representing landscape and nature.  Here, the installation, ‘Natural’, is based on the Japanese Zen garden.  It is made of brightly painted casts of rocks, planted onto grounds collaged together from sections of yoga mats. Each painted rock represents a flower from the artists’ garden in Formby, to where they have recently relocated from London.  Their other screen-based work looks digital but is actually an analogue pouring of paint over glass to represent all the colours in their garden.

Also at this end of the gallery is a Gary Hume silkscreen print, ‘Vicious’, the inspiration for which came from two sources.  The first was Lou Reed’s song of the same name, with its opening lyric ‘you hit me with a flower’. The second was an athletic statue of Mussolini, which Hume used as a dark silhouette to overlay on the background of flowers – a menacing juxtaposition that reflects the title.

Stephen explains that his aim in curating this exhibition was two-fold; “firstly to show how the floral still life genre has changed over time and secondly to provide a commentary on the clichéd association of women with flowers”.  One way he has approached these aims is through a most unusual audio guide – that of poems being recited for almost all the 37 works on show.

An example is the pairing of Henry Schlesinger’s sentimental painting of a young woman holding a rose to her cheek with Dorothy Parker’s cynical poem, ‘One Perfect Rose’.  Another provocative poem is ‘Mr Punch Speaks’ by Adrian Henri, which accompanies Arthur Ballard’s ‘Punch and His Judy’. This is a double portrait of the artist and his much younger wife, which is based on Manet’s ‘Olympia’.  In both paintings, flowers are presented as a gift from a lover, ignored in Manet’s painting and carelessly discarded in Ballard’s.

The poems are all read by Maria Isakova-Bennett, an award-winning, multi-talented poet and artist from Liverpool (www.mariaisakova.com).  She has written most of the poems on the audio guide in response to the artworks.  Stephen has chosen others, among them works by poets such as Emily Dickinson, Michael Longley, Wendy Cope, William Blake and George Eliot.

I confess to not being a great fan of the usual audio guide, so I first went round the exhibition without it.  But then the experience of standing before the artworks listening to Maria’s recitals added a whole new dimension to the viewing, making it a contemplative and intriguing coalescing of the visual arts and words.

Maria had only a month to write the poems for this exhibition, which worked out at about one a day, something she says is not her usual way of working: “It was quite a challenge.  Usually it can take me up to nine months to finish a poem.  I put them away and then go back to them from time to time.  But this commission forced me to let go of them quickly and to explore something completely different in my writing.  It feels like something really special, a real gift”.

One piece that isn’t yet included in the exhibition is an antique, floral Chinese skirt.  It is over a hundred years old and an example of the free hand embroidery and design of traditional Chinese dress for women of high social status.  The reason for its absence is that it is need of restoration and The Atkinson has launched a crowd-funding page to raise money for the repair. (www.spacehive.com/the-atkinson-trust-empower-our-flowers)

But even without the hoped for addition of the skirt, this exhibition is a visual and aural delight that has been put together with great care and imagination.  And the good news is that it’s on until March next year, so there is plenty of time to see it.  There are no talks planned to go with this exhibition but guided group tours can be arranged through the Gallery.  Sadly there is no catalogue of the show – funding being scarce for such things.  But it would have been a gem to have all the images of the works, the stories behind them, a printed version of all the poems – maybe even a CD of Maria reading them.  Given how long the Exhibition is set to run, maybe there’s a benefactor out there who’d like to make this possible! 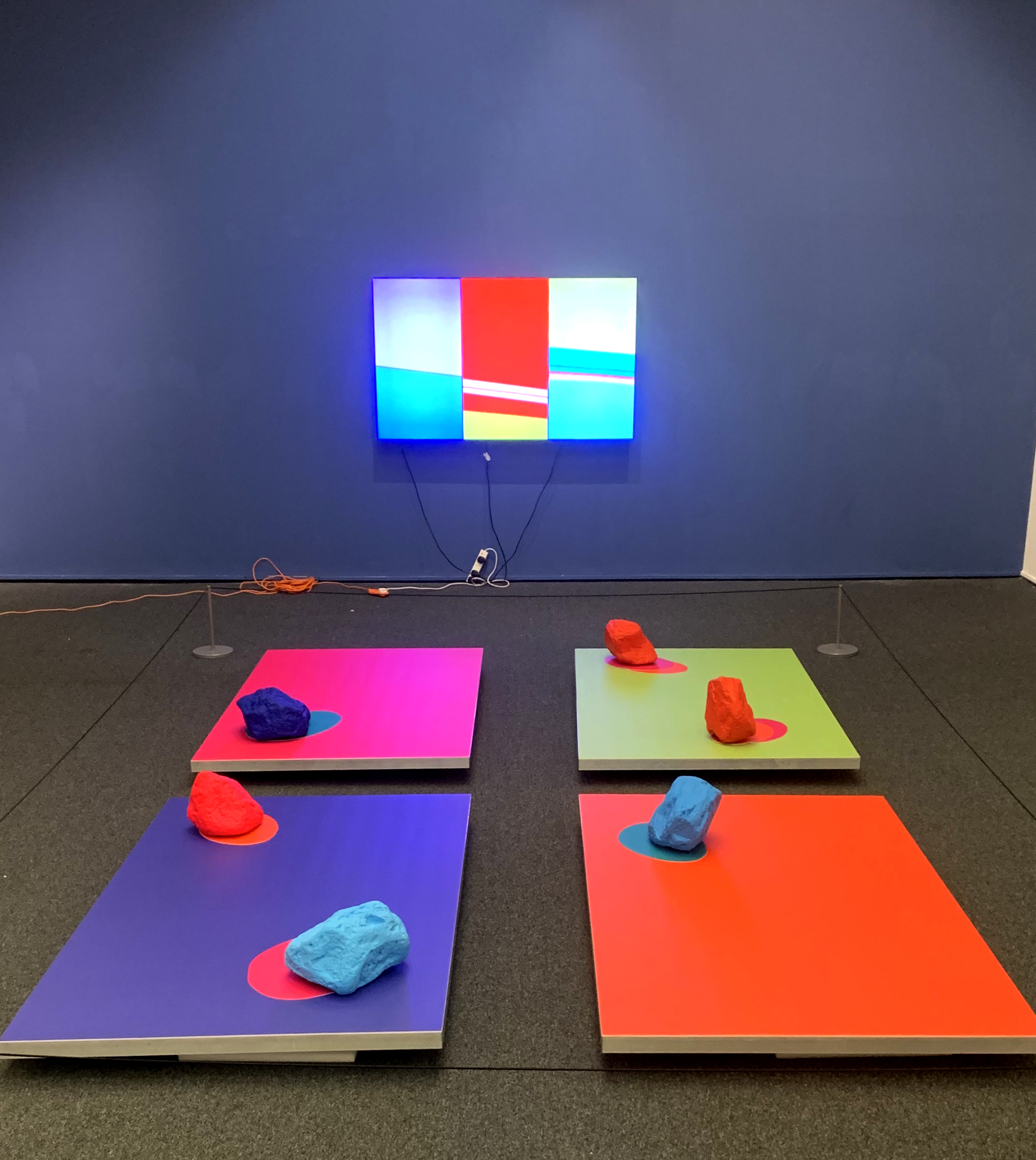 Believing or Not at Tate Liverpool