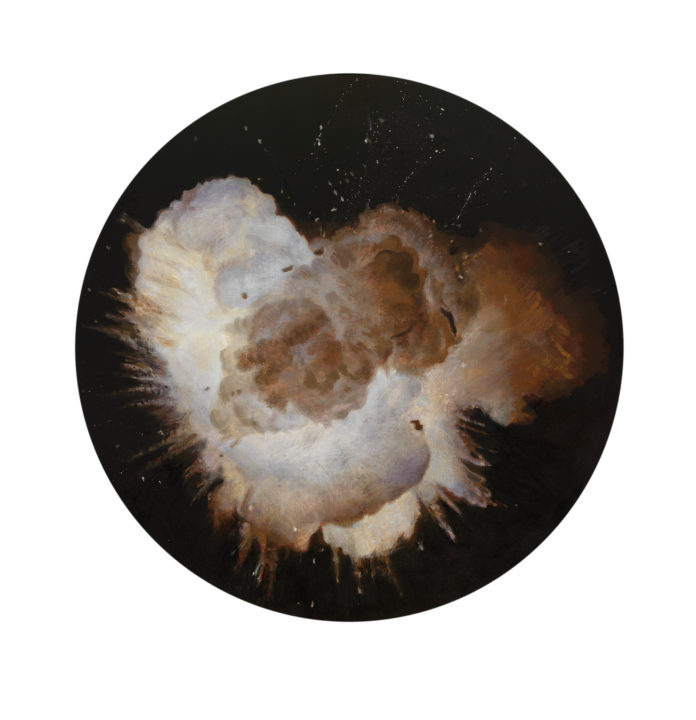 Christian Furr, a Retrospective
Williamson Art Gallery & Museum
Words, Carol Emmas
Generally speaking with an artist there is a certain contemporary signature style attached to their work which is highly recognisable and points to individuality. Take the work of other well-known artists who have found success, such as the currently topical, Wirral-born, Mark Leckey, there is no disputing his particular trademark artistic stamp. Just as there is no disputing the style of Liverpool-associated artist, Peter Blake.
However, Heswall born, Christian Furr who is the youngest ever artist (in 1995, at age 28) to paint HRH Queen Elizabeth II, defies the usual logic here. Known for his diversity, his mid-career retrospective at the Williamson Art Gallery looks as though it could have been painted by several contributing artists more than it does a one-man show.
Another locally connected artist, Nick Hugh McCann, in his 2016 Williamson Art Gallery retrospective treads a similar path in that his work spans a raft of interests and genres making him impossible to pigeonhole, (although his later work does become more distinctive). Yet, similarly to McCann, it is possible that when painting commissions, both the subject matter and requested medium can change and Furr is highly sought after for his commissions. Particularly through portraiture, as he is excellent at nailing the subject’s likeness. He also works collaboratively – which means his painting and medium style are again bound to diversify when other peoples’ influences are concerned.
Furr was a pupil at St Anselm’s College in Oxton, before completing a foundation course at Wirral Met and then going on to study a Fine Art degree at De Montfort University.  His works have been exhibited in the Saatchi Gallery, National Portrait Gallery, Royal Society of Portrait Painters and the private collection at the Vatican. He is also collected globally and features in the permanent collection of the Dorchester Collection’s flagship art hotel 45 Park Lane in London. However, it does mean that his retrospective doesn’t give much indication to many of the ideas that Furr himself holds close to his heart, as it flits from traditional painting to neon, inkjet with diamond crystal, a backlit image, overworked giclee prints also feature in his oeuvre.
He does seem to like cheese though and has painted many kinds in a traditional still-life style. Yet, unlike still lives of the past, from artists such as Clara Peeters and Floris van Dijck whose cheeses are set against other complementary still life items, Furr paints the cheese generally as an oozing lone item against a large darkened backdrop.
He even paints a single covered Dairy Lee triangle, and on his website a Babybel and plastic-wrapped cheese slice. Works from his Men and Women series such as The Jokers (2014) and Mirrors (2003) are reminiscent of the Lucian Freud and Edward Hopper tradition, yet with a subtle humour attached.
Humour does seem to pepper Furr’s work and you get a slight feeling that he is having some if not a lot of irreverent fun along the way. Particularly in respect to his slight on Anish Kapoor’s 2016 move to scoop exclusive rights after claiming he had produced the blackest black pigment (so dark it absorbs 99.96 percent of light) and named it Vantablack.
Furr inadvertently whipped up a media frenzy after he claimed no one person had the right to monopolise a colour.  In stark protest, in November 2018, Furr launched a new super-black called 7Black which he developed alongside scientists; Hin Chun Yau and Francois de Luca in association with Imperial College London and the Science Museum.
Instead of keeping the colour for use only to himself and his team, he incorporated it in a neon artwork entitled Black Eye- Third Sight and avowed that his nano-black material would be open to all to use. It seems that Furr is both having fun with his work and simultaneously getting down to business.
We might not yet be able to pin him down properly to a specific iconic style, but as he is still mid-career there is plenty of time for that yet. Then again, as he comes across as rather non-conformist, he may choose not to and instead continue on the playfully diverse path he is currently on.