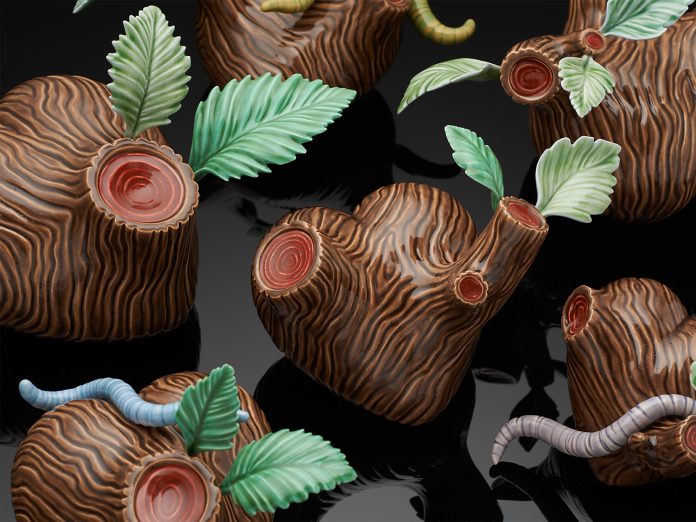 2016 is the first year of Bluecoat Display Centre’s new biannual ceramics prize, dedicated to Julia Carter Preston, an artist who spent most of her working life selling through Bluecoat Display Centre, and developing her practice in various studio spaces dotted throughout Liverpool’s oldest building, looking out onto the Bluecoat courtyard.

Julia Carter Preston was the ceramicist who brought sgraffito back as a recognised style in the 1950s, and had, ever since, worked from Bluecoat Chambers developing her own style and reputation the become one of the best known and most influential ceramic artists in the world. Since her death in 2012, there has been a hole in Liverpool, and hopefully the prize, dedicated to her name, can help promote the material she dedicated her life to.

The artists up for the award this year were Lanty Ball, Yasmin Lennon-Chong, Jane King, Susan Nemeth, Malene Hartmann Rasmussun and Jo Taylor. But the one who came out on top with the Judges Prize was Lanty Ball, whose ceramic bowls didn’t need colour to stand out at the front.

Lanty Ball is still studying for his MA in Ceramics at UCLan, so this is a massive prize for him. His work might not jump off the shelves, but his method is one that goes through every creative process imaginable, and describes his aggressively kinetic surfaces as drawings.

What unifies these artists is not just a mastery of ceramics, but an obvious understanding of the craft’s history. While they all appear completely different, and each have their unique quirks, they all display a wonderful playfulness where it comes to playing homage to what went before them.

Whether its bowls, wall tiles, or decorative hangings, the patterns, objects and topics they depict are fundamental to understanding the vast history of ceramics. I’m not the right person to talk about this at all, as somebody whose best effort at turning a mug ended up looking more like a ballet pump, but there are clear recognisable themes through these artists’ work, all referencing a rich culture of ceramic history.

Jo Taylor, in particular, takes so much from design history that her work looks like a fished up relic of Liverpool’s past – albeit with a bright and modern touch up. Her work for the Carter Preston Prize borrows forms from the wrought iron gates of Sefton Park Palm House. The result is a brilliant twisted wall hanging that works as a product of Fine Art more than it does a work of design.

Even Malene Hartmann Rasmussen, whose forest diorama might look like a child’s dream come true, bares all the hallmarks of the collectable ceramics of the 1930s that are still just as desirable as kitsch-idols today – even if they are perhaps worth a tiny bit less.

There’s still a chance to vote for the People Prize, and make sure you get to see your favourite again with a solo window exhibition in August 2017 – The exhibition is open until Saturday 20th August 2016.