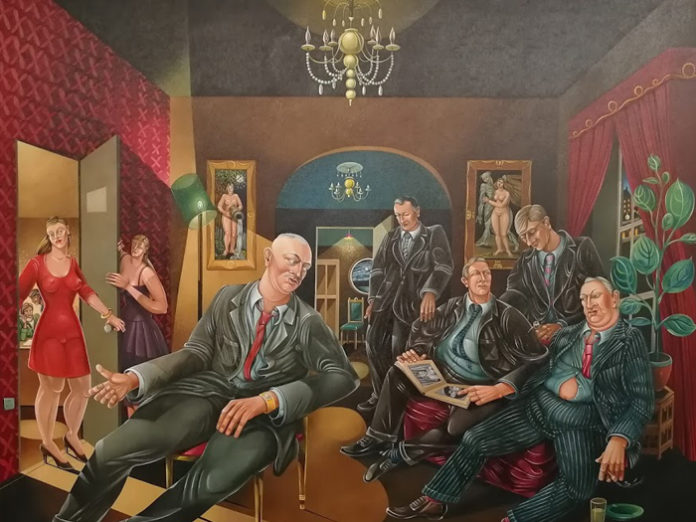 Caroline Coon: The Great Offender, The Gallery, until 27th May

Caroline Coon’s first ever solo exhibition makes its statement of intent as soon as you enter.  Look right, and you come face-to-face with an artist self-portrait: nude, sinewy, unashamed of showing a perception of herself at 70.  Look left to be met more nudity, accompanied by an assertive use of profanity.  Right from this start, it’s clear that Coon is an artist who refuses to mask her feelings.

It’s this sense of honesty which resonates through the exhibition’s entirety.  You can understand why Coon became affiliated with the 1970’s punk scene: her paintings are not about putting a glitz on life.  That’s not to say, however, that they’re sordid – just honest.  Take the brothel paintings: unlike many of the famous paintings on the subject throughout the century, they couldn’t be described as overtly titillating.  In fact the attention is focused less on the women, but on the men who are paying for the experience.  It’s they who seem more worthy of our judgement: indeed, it is they who face retribution in Prostitutes, Stone the Hypocrites!.  Even as she acknowledges the dangers of their work – a dark spectre hovers very literally over Found Dead… – it’s so refreshing to see this non-sexualised perspective on the realities of the sex trade.

That word, ‘refreshing’, also resonates in the nudes of her organic series.  Merging with nature, her figures are almost unconsciously nude.  These figures may be the subjects of our gaze, but they are not here for us.  They are here to enjoy the pleasures of being in nature, entirely comfortable in their own skins.

The rest of the paintings cover a diversity of subjects – and why shouldn’t they?  It would be more surprising if an exhibition including more than 30 years of work didn’t reflect a broad spectrum of interests.  What they do all have in common is the effect of giving you the impression that you’re seeing the world through Coon’s eyes.  The series of flower paintings falls perfectly naturally into this narrative: paintings on a subject the artist enjoys.  Around the corner, her most conventionally political works are almost certainly the ‘National Flag Series’.  As each relating to an international act of violence, Coon never lets us forget the people behind the stories – the figures whose lives are affected by political actions, searching for a reality beyond grand political gestures.

Does the fact that these works are widely in the traditional genres of figure painting and still life account for why Coon has not enjoyed more previous success?  And yet, this exhibition proves that Coon is an artist who is adept at using the genres to express a view of the world which is innovatively and authentically her own.  The show is subtitled “The Great Offender” and yes, it is sometimes surprising to meet a new perspective  But Coon is not an artist who is out to shock for the sake of it: what’s so delightful about these paintings is that they tell a story of commitments being put into action.

Review: A Different Way of Seeing

Preview: Milapfest, for Sgt Pepper at 50