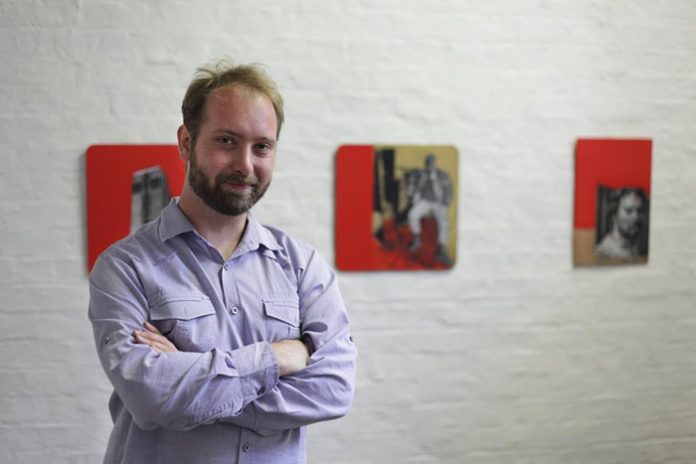 Captured Moments was a treasured moment in itself, when Liverpool’s Road Studios opened its doors on 22nd July 2016 for the first Episode of the Road Studios Box Set.

The show focused on the works of two Liverpool-based artists who take a unique perspective on portraiture, Oscar yi Hou and Patrick O’Rourke.

The precocious talent of Oscar yi Hou presented us with an elaborate selection of acrylic and oil paintings, that employed colour in an unexpectedly mature and yet playful ensemble. At only seventeen, Oscar’s exhibition gave a snapshot of the characters in his life that are significant in the here and now. He sought to press pause on the life-changing threshold between adolescence and adulthood to meditate on the question of existence and expectation.

The body of work was cohesive and strong. And where most teenagers may keep a journal, deface their exercise books with questionable doodles, or start a band to express their confusion at being alive; it is unusual to see such melancholy musings make it to the canvas instead of social media. The name of the exhibition suggests a photographic snapshot, and the paintings appeared to be in high resolution, a real a treat for synaesthetes.

Juxtaposing the technicolour, Patrick O’Rourke’s wooden canvases appear stark. With a toned down colour palette of red, with monochrome in charcoal and chalk and a painted background.

Photographs are synonymous with nostalgia, a rare quality, attributed to select memories that acquire magic and positivity, a feature that is bestowed by time in a way that evolves and transforms the mundane of now into an intangible layer of fondness, much like charisma makes a random personality inexplicably magnetic.

O’Rourke takes the everyday scenes of inner-city Liverpool; unmistakably unattractive council houses are anchored in a historic time warp of memory. The protagonist of one particular piece pierces the audience with her fierce blue eyes, staring into the gallery, destined to free herself from the confines of a typical neighbourhood. O’Rourke makes the familiar into something classic, almost heroic. In Meat, the housewife or mother prepares mincemeat. There is nothing unusual about such an act – unless O’Rourke knows something we don’t that could conjure up something more sinister. And yet, this charcoal spectre could make for an excellent sleeve image for a DVD of a Tarantino film. Many of O’Rourke’s images would lend themselves to album covers, such is their eye-catching quality.

Two artists, both using portraiture to capture memory, and yet their styles are worlds apart. Their work complemented each other’s and made for an interesting analysis of the modern memory, how we internalise it and how we later express it, allowing it to marinate in nostalgia that a camera lens might miss.