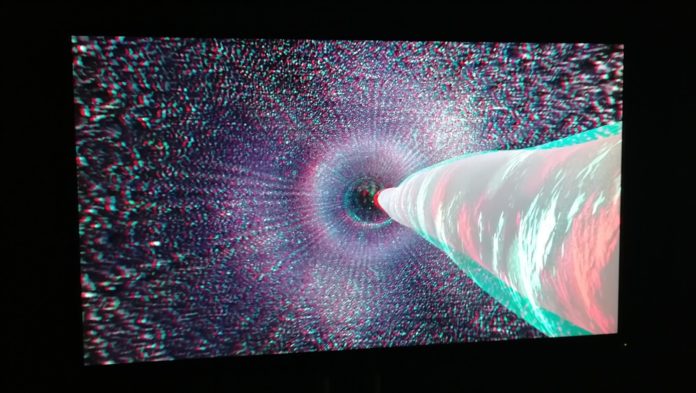 Particle physics: undoubtedly astounding, yet frequently utterly bewildering. It’s one thing to understand that CERN exists to conduct experiments, quite another to fully grasp the consequences of the theories they are working with. It is this space between common sense and comprehension that is explored in Broken Symmetries.

You sense that the ten featured artists have all worked with CERN with a similar sense of awe, and a desire to comprehend. Together, these interpretations of their experiences create a show that feels compassionate. These are works which embrace the boundaries of understanding as a challenge, a wonder in their own right.

The introduction into Gallery 1 sets the scene nicely. Juan Cortes’ Supralunar invites the viewer to place their skull against conductors which amplify the artwork’s sounds, but only to you, creating a unique perception. Looking up in a return to the real world, you’re met by Semiconductor’s film The View from Nowhere, exploring the mechanics and perspectives of life at CERN. The comments offer intrigue and comfort in the knowledge that it’s not only us lay people who don’t understand precisely what they’re looking for – that in fact, even the smartest minds don’t know what they’re looking for until it appears. It seems that to discover the nature of the universe you not only have to be smart, but also willing to accept the limits of your knowledge.

Consequently, Broken Symmetries also reflects the human need to come up with systems to make sense of the incomprehensibility of how the world works. It’s not just in physical formulae: language and art are also placed in this category up in Gallery Two. The holographic principle, explored in Suzanne Treister’s The Holographic Universe Theory of Art History, is probably the deepest the show wades into the theories which may redefine everything we know about the known universe. Dealing with such enormous challenges to the apparent laws that we live by, the archives of art history are reflected to us as humanity’s consistent, passionate attempts to make sense of experience. And when Lea Porsager offers us a quasi-spiritual interpretation of a neutrino’s path in CØSMIC STRIKE – and in spite of her reference to “loopy mysticism” – she sympathises with our need to search for a purpose to and explanation for the unknowable.

What, then, of the the results of all these investigations: how can we comprehend the application of CERN’s work to the life we know? This is where Yunchul Kim’s Cascade shines, as an intricately detailed system that creates an object of wonder. The detection of the elementary particles known as muons – detected within CERN’s collision experiments – sets off a process of light and movement which inevitably sparks curiosity. More than just an array of interrelated sculptures these pieces draw us into intrigue, compelling us to look closer and discover how they work. It’s what Broken Symmetries achieves as an exhibition, too. Rather than confusing the wonder of science, it creates a space to accept and wonder at how just baffling the fundamental nature of the universe can be.