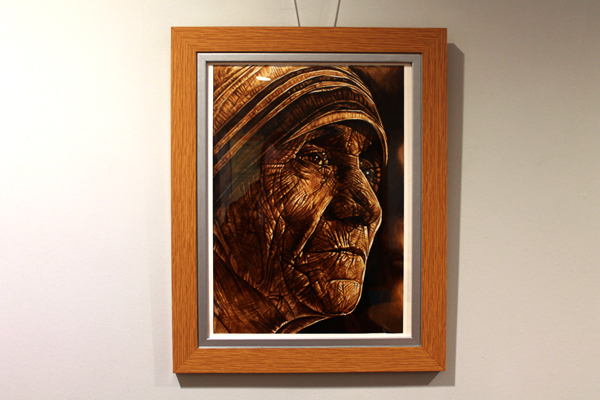 Simon Yorke’s Bodhisattva is a mesmerisingly calming exhibition. Often exhibitions in public meeting places get over looked as decoration, but in this case, the work displayed suits its scenario perfectly, keeping its audience captivated in that daily contemplation time that spans religion and class and race and age. The cup of tea.

The exhibition relies heavily on Buddhist values, but these are values that can be translated to day-to-day, non-religious lives. Faith can manifest in many ways, something taught in most religions – helping this exhibition fit fantastically at the Quaker Meeting House – and the people, sometimes figures, sometimes icons, are people to put our faith in. A potent reminder that holiness is not just an attribute for saints, but a very human attribute.

Yorke, unlike the gallery does not house Quaker beliefs, but neither do most of his subjects, some Buddhist, some Christian, and some who are barely associated with religion at all. While Bodhisattva translates most directly as ‘enlightened beings’, it would be unimaginable to think that enlightenment is available only to those subscribing to religious structures, and in this case the celebration is not of their religiosity, but of their compassion, and of their goodness. In Buddhist theology, the bodhisattva is reborn out of compassion, reaching paradise once they have had their chance to help those that need it more. They are martyrs for compassion, rather than a specific cause.

The cathartic ink process behind the portraits adds to the serene reactions to the works, abstracting details in the faces to almost characterise the goodness in his subjects. He uses 100 year old pen nibs to create these layers of scribed ink, and the result is wonderfully considered and unavoidably involved. The process is reflective of the bodhisattvas depicted, layering inks, and scratching details through the layers. The method not only looks ‘good’ objectively, but it looks ‘good’ in the sense of honesty, and the sense of passion and care and love. His statements about goodness and compassion are proven in his paintings, making it very difficult to disbelieve any of the information you are given.