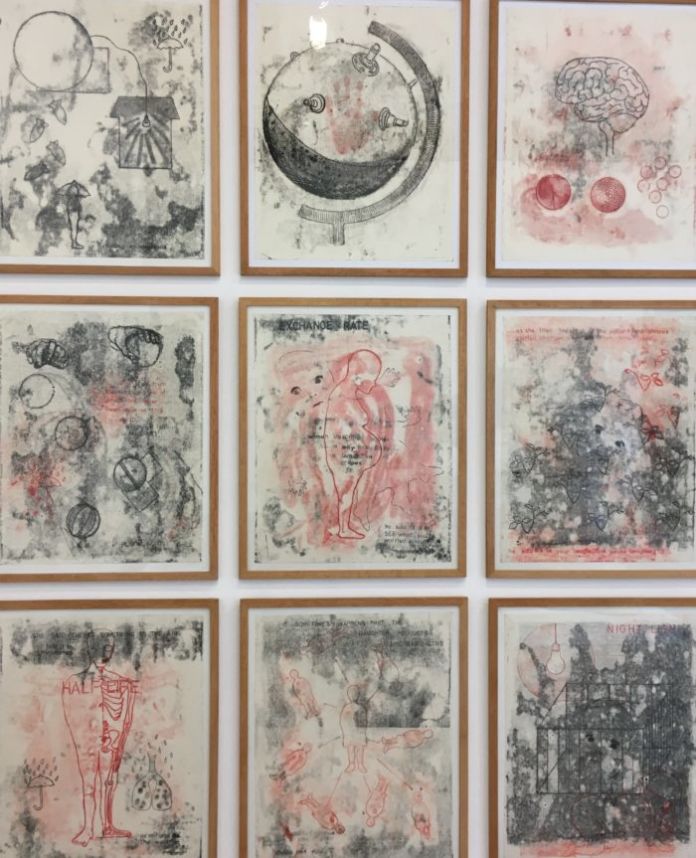 In the Peaceful Dome
at The Bluecoat, until 8th April 2018

Words and photos by Moira Leonard

So, how am I going to talk about the final Bluecoat 300th Anniversary exhibition? Many will already have visited as it has been open since October 2017, however, for those that haven’t the good news is the run has been extended until 25 March 2018. And it is worth a look – bringing together history and contemporary culture, highlighting the importance of the Bluecoat from it’s original inception as a school for orphans to the thriving contemporary arts centre we now have in the centre of Liverpool.

The exhibition does not shy away from the darker history either, namely that Bluecoat was originally built with the profits from Merchants, who used slaves to generate said profits. However, this is a story of much of the city too, not just Bluecoat. The exhibition programme states ‘this contradiction between barbarity and philanthropy has been interrogated by several artists interventions’ and in 1988 the performance group Visual Stress ‘cleansed’ the Bluecoat from its slave past with a dramatic multimedia performance including a punk rock concert, much hypnotic drumming and daring stunts.

It’s a magical place these days where emerging artists can grow, and the creative practice is nurtured. All while the captivating courtyard makes you long for summer, the balmy evenings and the return of the Bluecoat outdoor events.

So, I was pleased to be invited to a guided tour of the exhibition by Artistic Director, Bryan Biggs. He really brought the exhibition to life for me and shared stories about most of the exhibits. My review will try to capture some of those stories, however, I recommend that you take one of the regular guided tours to hear more detail – it will really enhance your experience and help you enjoy the work in a new light, spotting tiny details that you may otherwise miss.

For example, look closely at the huge photograph in the first gallery by John Davies of the burnt-out Bluecoat restaurant after the unfortunate fire in 2008. You will see under the glasses the crisp white table cloth which escaped the soot. Tiny detail. Or the ‘where’s wally’ type advert in an 1832 print (I’ll leave you to spot that one).

It goes on…Janet Hogson has three pieces in his show, sadly she passed away quite recently, but her stunning work lives on including the very clever film documentation of ‘History Lesson (1999)’ where the original Bluecoat gallery space (where the café is now) was turned into a film set and back into a ‘white cube’. The film was then projected onto the walls of the gallery to create ghostly images over the real space – so people ‘appeared’ to move across hallways, radiators, windows etc. Very site specific but very clever.

Hogson is also responsible for the light-hearted film ‘re-run’ using the Bluecoat staff as actors recreating pursuit sequences from famous films while the post-fire refurbishment was going on. This is shown in gallery one. I’d recommend seeing that as you leave the exhibition rather than first. It will make you smile.

More anecdotes, well, how about the story about Roderick Bisson who was a very important Liverpool post-war artist who could possibly have been one of the great names alongside Picasso, Matisse, Cezanne if he’d left the city and hadn’t been snaffled as art critic for the Daily Post.

Or the revisited installation from when Bluecoat commissioned an artist to create a large-scale work linking Hull (last year’s UK City of Culture) and Liverpool. Many artists responded with predictable ideas around the M62, however one artist stood out: Philip Courtenay who suggested taking the long way around. He drew a metaphorical line from Hull around the earth eventually ending back in Liverpool visiting key milestones along the way and bringing back tiny artefacts for display at the Bluecoat.

25 years on there is now talk of reworking this piece to respond to the UK leaving Europe, perhaps closing the loop really slowly with a horse and cart journey back to Hull or maybe using barges on the canals. This is still in the concept stage but sounds like a great idea to me.

Of course, there is the story of the controversial Jacob Einstein sculpture ‘Genesis’ which caused a sensation in 1931 depicting a heavily pregnant naked woman with an ‘African style mask’ which generated 50,000 visitors at the time, each paying six pence to see it. This is displayed alongside a selection of historical works from the feminist political artist Jo Stockman and echoed by Edward Carter Preston and his lost sculpture ‘Arms and the Man’ which, Biggs explains, emerged from the ‘the fear of the mechanised future’ and ironically now reproduced as a 3d print using the latest digital technology by Fab Lab Liverpool.

And this is not all, the show also displays contemporary ‘post-impressionist’ wallpaper designed by the Grantchester Pottery, new artists giving archaeology a modern twist, gorgeous prints of the written word from Juniper Press, and even a significant photo of the Beatles at Liverpool Town Hall in 1964 with the black vocal group ‘The Chants’ from Toxteth, one of whom went on to chart success with the Real Thing.

This is a rich exhibition which clearly illustrates the importance of Bluecoat through the ages with its global connectivity, vitality, creativity, diversity, honesty and I would add fearlessness. I am very grateful to Bryan Biggs for taking me on this journey. He says he wanted to ‘set up conversations across time’, and here he has succeeded I think. So… go see it, grab a coffee and lets chat!

In the Peaceful Dome, Bluecoat
1 of 7

In the Peaceful Dome at the Bluecoat ends 8 April 2018