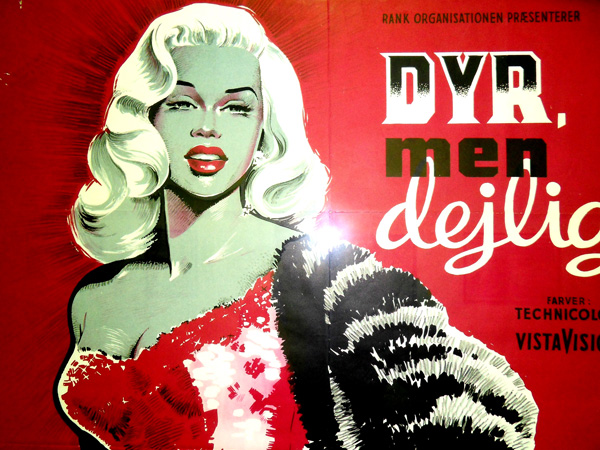 Coming from a generation who just about knows Diana Dors as a name without a face, I might not seem the best placed to review this show. In this case though, The Gallery Liverpool have done such a brilliant job of displaying this archive that I learned more about Diana Dors than I learn on most trips to the museum. It is an ambitious but empathetic show, covering a lot of ground but not diluting our impression.

This is a show that cleverly focuses on a specific section of the Bombshell’s history, and in doing so, doesn’t overload newcomers with information, and inspires recollection in fans. It is an insightful display of archive from a gallery making a brave move with this show, and they’ve done a great job of it. From magazines to movie posters, it is a great snapshot of both Dors’ career and of 1950s stardom.

Diana Dors, born Diana Fluck, had a bit of a Hollywood flop in the 1950s, but somehow it seemed to be one of the most successful flops of all time. Inspiring fandom across the globe, whether that’s displayed in the sheer volume of magazine covers we are given just a snippet of, or in the foreign language movie posters adorning one corner of the gallery. It is a testament to her stardom that these films were presented in foreign language, and that some of these films have even been translated to DVD.

The collection, developed and archived with love and attention by Paul Sullivan, President of the Diana Dors Fan Club, is a wonderful introduction to Diana Dors, but also to this time in history, where colour touch-ups were not seen as unusual, and plunging necklines were a wonder to behold in a decade where X-rated meant something very different indeed to what it means now. It is a brilliant captioning of her success, even sound tracked with her songs.

Twenty or so magazines adorn one wall of the gallery, and I am told this is not even the full extent of Sullivan’s collection, which includes magazines, posters, films, music and personal family photographs. It is a collection that beggars belief, even in this small amount, so hopefully one day it can be displayed in full. The mix of collectables and audio visuals makes for something truly worth of archive, and it has been displayed by The Gallery Liverpool with a wonderful sensitivity.

This exhibition is supported by a special showing of Diana Dors in Tread Softly Stranger at FACT Liverpool on Sunday 6th December. An expression of support from FACT that insinuates a true love of this 1950s giant, following an archival exhibition that has been fantastically well received by the public and by fans.

Diana Dors - Blonde Sinner at The Gallery Liverpool
1 of 4