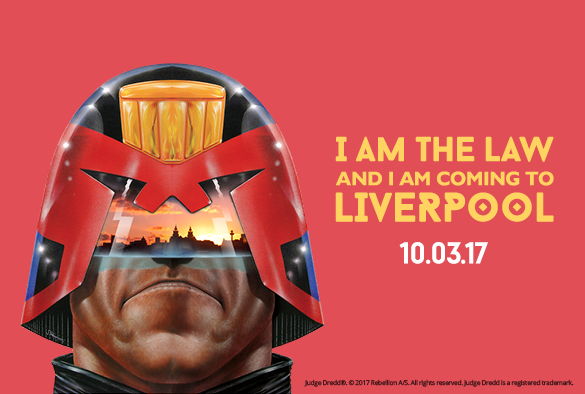 “In the beginning, I couldn’t draw” – John Higgins

To start with I should make a confession, I am at heart a die hard nerd and comic book fan. As a child my parents (possibly by accident) introduced me to the absurdly beautiful world of Hewlett and Martin’s ‘Tank Girl’. Completely off the radar of anything child friendly but I loved the anarchy of the drawings and you couldn’t get them off of me with a crowbar. I got older and acquired a love of DC’s Constantine from a mistake of a boyfriend, a fascination with Brian Azzarello’s 100 bullets from another. I missed the memo entirely that comics were ‘not for girls’ and even practically failed A level Fine Art in an attempt to recreate my own version of the infamous Sin City series by Frank Miller. Very poorly I might add.

What I am trying to say is, when I heard that there was going to be a retrospective of John Higgins’ work on, not 15 minutes from my front door, I was in.

Higgins was born and raised in Liverpool, even returning to study at Wallasey College of Art after a stint in the army posted him to the Far East for a few years as a teenager. And as easily as you could chart his career from those local roots to the success he found as an artist in the comic book industry later, VGM have done it for you in a wonderfully laid out show.

Walking up to the space you are greeted by a larger than life decal of Judge Dredd himself, instructing you to head “This way, Citizen!” as VGM put Higgins’ most recognisable work to good use as a rather surly signpost.

Go through the double doors and you find yourself in a long corridor with a lot of seemingly mainstream looking art. Not a comic book in sight. I have to give thanks to the friendly woman on the front desk at this point, who helpfully pointed out that the best way to view the exhibition was to walk down this corridor and then around to the right and through the two adjacent rooms. Had I not done this I would have missed one of the best aspects of the show, which is a full look at some of Higgins earliest influencers. What at first glance seems to be completely out of context is in fact where you’ll gain the most context for his work.

From Bridget Riley to Euan Uglow each artist on display is accompanied by a helpful caption describing when and why each helped determine the course of Higgins own work. It’s a rare treat to be privy to so much of the substance of an artist and a smart way to begin an exhibition.

At the end and to the right, you enter a room dedicated to Higgins’ early work and the projects that made him such a recognisable name in the industry. When it comes to comic books, there is rather an unfair tradition which puts the role of colourists a little in the shadow of the illustrators and writers that usually become household names. Being of this profession did not deny Higgins any form of ambition however, and this room perfectly illustrates the famous palette choices that placed him firmly in the sights of Alan Moore when he was writing Watchmen. A particular highlight here is the collection of cells showing examples of line work, traditional colouring and then Higgins’ own style together. Any aspiring comic book artist will appreciate this as a hugely insightful take away from the show.

Another highlight was the display of colour cells from The Killing joke, a critically acclaimed one off batman novella published in 1988 and also written by Alan Moore. These displays are full of small things that will make any hardcore fan squeal in delight, something even the most stoic of nerds have no problem with doing in public. One wall even celebrates the self-published Razor Jack series. A labour of love that practically bankrupted Higgins but something that he is nonetheless clearly proud of.

The last room is inevitably dedicated to Judge Dredd. The most bankable character from the 2000AD comic series and subject of two huge Hollywood movies to date. You can feel the personal influence here, Higgins has often been quoted as saying that Dredd is one of his favourite characters to work with. There are some remarkable pieces on display that lend a lot to the series and will help even the greenest of fans into the series.

VGM have used the small space that they have to great effect to celebrate one of Liverpool’s most successful sons and this exhibition will entertain and inspire new and existing fans alike. The rooms are scattered with personal quotes from the artist, and as cliché as this can be it works incredibly well considering the setting. The whole place seems designed to educate, everything here makes you feel as if you are privy to the inner workings of a fascinating artistic mind. From early inspiration and palette conception, right up to practical application nothing is left out and everything is up for grabs. To learn from and be inspired by, a must see for aspiring artists of all kinds.