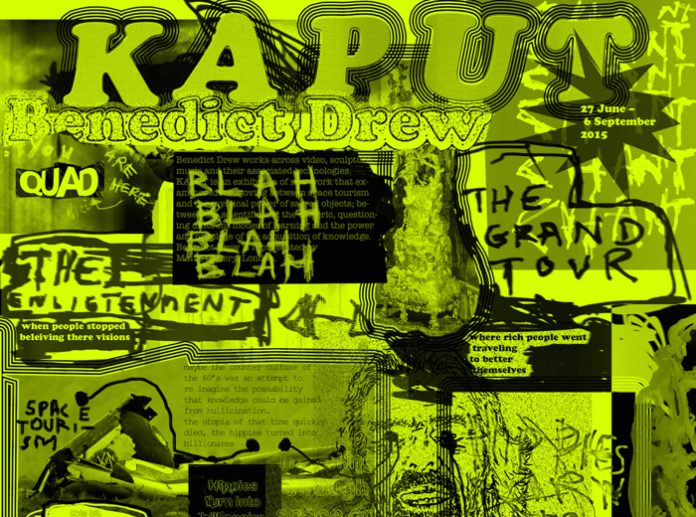 Benedict Drew transports his audience in this memorable and psychedelic work. The viewer of KAPUT is immediately confronted by a collage of fluorescent coloured posters that have been aggressively annotated.

The posters include a picture of the 2014 Virgin Galactic crash. ‘The Enlightenment’ and ‘The Grand Tour’ frantically scribbled on opposite sides, connected by a double-headed arrow suggesting their equivalence, and a commercial description of Drew’s exhibit with ‘BLAH BLAH BLAH’ written over it. Already this piece is a head scratcher, but what waits around the corner will stop you in your tracks.

Taking up the entire room, Drew’s piece uses a combination of video, audio and sculptural elements to override the senses. Overlooking the installation is a large, bright blue line-drawing of Richard Branson’s face, eyes closed and mouth open, as if being brainwashed (or is he doing the brainwashing?). The portrait seems to be the driving force of the entire piece as orange cables pour from his eyes, connecting him to its other elements. These include two screens either side of Branson that feature a topless man playing a saxophone, whilst two small television sets placed at the centre of the room play footage of a Virgin spacecraft.

Four tin-foil wrapped, brain-like sculptures have been placed in each corner of the room, seemingly alive and breathing as the foil splutters and shakes. A human form lies in the middle of this bizarre and alien world, covered in a mess of fluorescent colours, as if fallen from a great height or completely overcome by a surge of energy. The image of a moon-like sculpture rotates and looms over this poor, splattered figure.

There is no empty corner to quietly contemplate; Drew’s complete use of space makes his audience very much a part of this imagined world. The room is also dimly lit, making the fluorescent colours stand out, whilst forcing the viewer to closely inspect each element. Drew’s use of audio feedback further muffles the senses and makes the environment a stressful and overwhelming one to be in.

A dystopian world of chaotic colours, in which, the closest thing to the human-form lies in a wreckage of luminous paint and electrical equipment. The lack of possibility for individuality and the brain-washing, life-sucking presence of Branson’s portrait can reflect Drew’s criticism of, what he calls, ‘the horrors of the modern world’.

Drew’s annotated poster encourages ‘self-oscillating’ and ‘traveling through space on a dissonant sound wave’, rather than seeking an ‘enlightened’ mind that has stopped believing in its own visions. His piece can act as a criticism of Virgin Galactic’s human spaceflight system which, similarly to the Grand European Tour of the 17th and 18th century, offers a tourism experience only available to the economically privileged.

Our own visions can create new worlds that deserve to be explored, and Drew certainly brings his own vision to life in this vibrant piece.