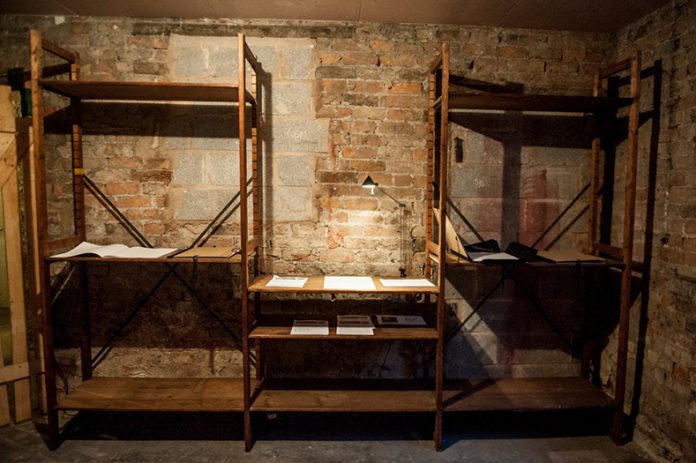 I had blisters forming on my feet after a long day in new shoes, and a caffeine headache from the excessive coffees that had fuelled what had been, on the whole, a fairly awful day. Maybe it was the free wine, maybe it was having a wall to lean on, but ‘basements connected’ was a massive pick-me-up after an exhausting nine-five.

The exhibition, which I was fortunate enough to preview on Wednesday, is an exciting return for a project that had a quietly influential hand in forming Liverpool’s current creative direction. Its leaders are basement pioneers Susan Leask and Margaretha Schoning, who have been steering this project since day one.

The artists who have exhibited don’t share a common focus at all, but unlike exhibitions where that becomes an issue, here their differences are drawn together by the simple segmented nature of the space. Take any basement, they’re never simple things, with rooms to the left or the right, and supporting walls you never knew your house even needed. It’s hardly a layout a curator would ordinarily jump at, but its success is in its flaws, allowing artists with little in common to exhibit with each other in a way that both unifies the work, and keeps it strictly separate. A wonderful contradiction within the projects’ identity.

In its founding year (1996) the project was the product of just such a residency, of international artists sardining themselves into the Georgian house, with artists seeming to come and go each year, and once in a while returning.

My favourite example of this is Maria Luiza Pyrlik, whose Panic Room managed to calm me down, which may or may not have been its intention. In my calmed state I took a chance to turn around, and inside the cold dark wine-cellar, were the remnants of Pyrlik’s work from the last exhibition here in 2009.

‘Basements connected’ isn’t just visiting artists though, with four artists based within walking distance of the basement. Susan Leask, Margaretha Schoning, Anna Ketskemety and Tony Knox are the locals, and just like the others, are all presenting work which bares the smallest possible resemblance to each other – other than the original request to respond to their story of basements, either true or invented.

Ketskemety had her own segment of the exhibition entirely, with a basement at 56-58 Belvidere Road, L8 3TQ (open to the public during daylight hours, until August 14th) over a mile from the rest of the exhibitors. Knox, Leask and Schoning were really quite close and personal; Schonings documentation leads to Leask’s installation, via a corridor containing Tony Knox’s film. Three rooms that couldn’t be closer together with responses that couldn’t be further apart.

Schoning’s exploration of refugee rights and policies was a cold and unemotional statement presented with a clear precision. A precision equally apparent in Leask’s installation but, in the second case, with less given away. Neither work really addressed their immediate settings outside of happening to be in the room, and the contradiction came loud and clear with a film by Tony Knox that screamed of its setting – using film footage taken in the cellar, and found (“appropriated”) materials to help push its narrative forward.

The show uses those contradictions to tell as many stories as possible. And work from around the globe makes those stories even more diverse. It’s an exhibition that needs attention and a willingness to pry a little, but the result is that you leave feeling a little cleverer having exercised your thinking muscles.

To conclude as simply as I can, it wasn’t just the free wine that made this a good end to the day.

Liverpool Biennial 2018: Beautiful world, where are you (working title)