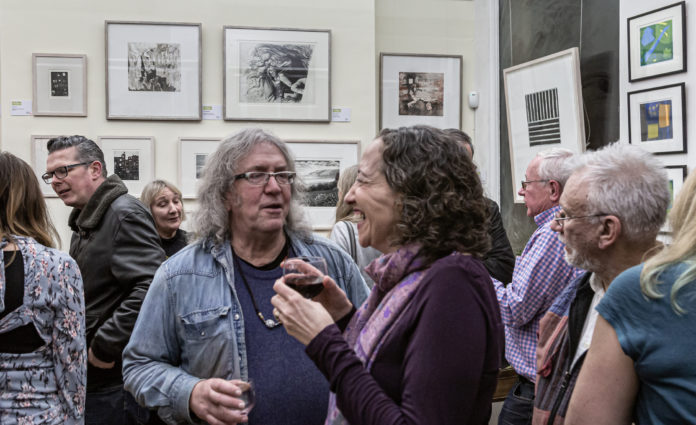 There was an enticing opportunity the other evening to talk to some printmakers about the many ways in which they achieve their images. The setting was Editions Gallery in Cook Street, where a group of artists from Bath is showing to masterful effect just what can be done with ink and paper.

The basic principle of making prints through mechanical means has been around for centuries, with the technique initially being largely used as a way of reproducing text, paintings and drawings. But artists soon came to see its potential as an independent medium, as a method of making original artworks – among them, of course, some of the most famous names from art history: Durer, Rembrandt, Goya and Picasso. 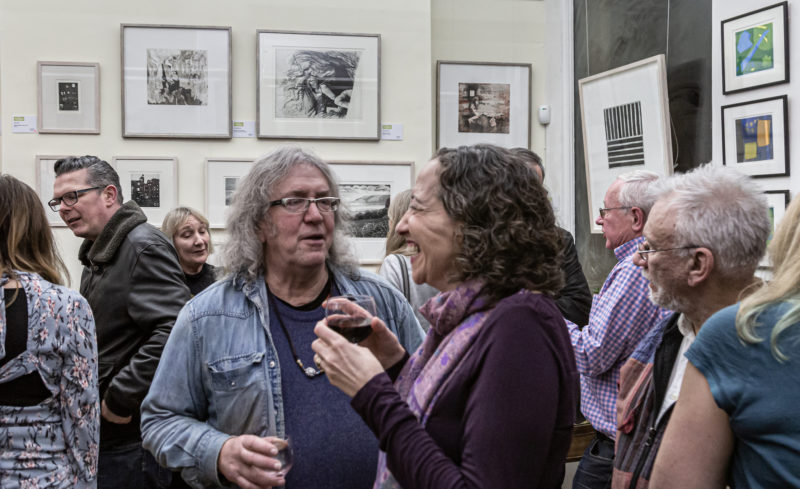 The artists here in Cook Street are continuing this tradition of producing original artworks through printmaking, using contemporary technical and artistic developments as well as age-old ways of scratching images into metal plates. The idea for Away Day came from the author, Peter Davies, whose book, Liverpool Seen, explores the rich and varied work of Merseyside’s post-war artists and sculptors. For this event he is wearing his other hat – that of linocut artist, and his prints are part of this exhibition.

Group shows such as this have an entirely different energy to solo exhibitions; in some curious way, each of the works holds its own space and yet together they provide the viewer with a cohesive experience. The wall labels convey the mysterious-sounding printing method by which each of the works was born – words such as lithograph, carborundum, soft ground etching, aquatint, monotype, all conveying that there is nothing to beat printmaking as a means of creative exploration. The subject matter of the works is as diverse as the artists themselves.

Speaking to Charlotte Moore, one of those exhibiting, she recounted how she has recently spent time in Japan. The influence of this experience can be seen in her print, Kintsugi. The jagged gold line she has produced reflects the Japanese art of the same name, in which broken pottery is repaired with gold-dusted lacquer. Another of her prints celebrates Italian Majolica pottery. The carborundum technique she uses offers her a way of achieving lovely soft edges in her images.

One of the obstacles facing printmakers when it comes to selling their work is that the notion of an original print is hard to convey in today’s copy culture. Digital printing has made high-resolution copies of artworks ubiquitous and so the idea of an individual, hand produced print has been undermined and misunderstood.

David Birks, another of the exhibiting artists, says this often means people are missing out: “Someone will go to a shop like Ikea and pay the same amount for a mass-produced image as they would for an original artwork”. He adds that he believes this is partly down to the fact that some people still find it intimidating to go into an art gallery.

David’s own process of printmaking couldn’t be more hands-on. He makes monotypes, the clue to the originality of the works being in the method’s name – “mono” coming from the Greek, meaning ‘single’ or ‘one’. He rolls ink onto a flat surface and then proceeds to draw into it using all manner of objects – cotton buds, toothpicks, cloths, expired bank cards – anything that will produce the particular mark he is looking for, this last being the best, he says, for a really clean, fine line. What he really loves about the whole process is that you can never be certain how the print will turn out: “You’re not in control of how the ink and paper come together and it is this human element that is absent in mass-produced copies”.

Rita Smith’s colourful etchings and aquatints are inspired by her global travels, with the ones on display here featuring New York’s urban landscape. On the same wall of the Gallery, Brian Elwell’s aquatint is of a scene closer to home – that of an abandoned Cornish tin mine, the image allowing it to be seen from different angles and in various lights.

Sandra Porter’s monochrome prints entitled Spirit Level stand out for the boldness and containment of the composition, of which there is a positive and a negative on display, i.e. the black and white in one are reversed in the other. The stripes put one in mind of the painter Sean Scully’s work. Interestingly, he is also a printmaker.

The Editions Gallery is located in one of those extraordinary architectural gems on Cook Street, which I now know is one of only two surviving examples designed by the 19th century Liverpool architect, Peter Ellis. Oriel Chambers is the other. His buildings were not well received by Victorians, who lambasted his use of modern methods and materials. But future architects and civil engineers took note and his use of glass and cast iron anticipated many of the design features of Manhattan’s 20th century skyscrapers. 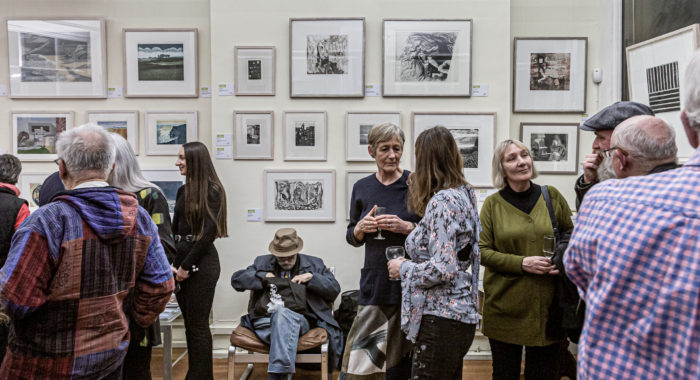 That’s the beauty of getting out there and going to art exhibitions – you never know what you’ll see, whom you’ll meet, or what you’ll find out. The idea of hosting a group of artists from another part of the country is an interesting one. What’s needed now is for someone to organise the return match, i.e. a group of Liverpool printmakers to Bath.

Review: Will Self: The Roy Stringer Memorial Lecture