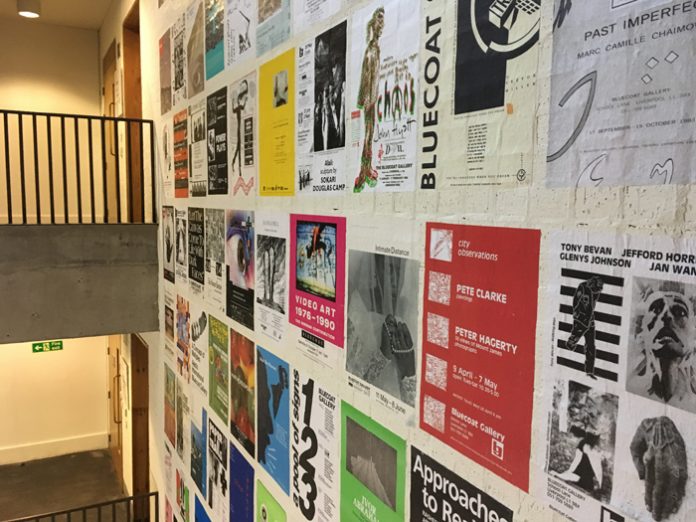 Art at the Heart of Bluecoat

Words and Photographs by Moira Leonard

Bluecoat begin their year-long 300th birthday celebrations this week with the opening of Art at the Heart of Bluecoat, an exhibition charting the history of art and artists in the Bluecoat building, and the story behind the oldest arts centre in the UK.

Whilst the building itself has been open for 300 years, the connection with art and artists begins much later, in 1906, when the school who had inhabited the building since 1717 moved out to larger premises in Wavertree. Within a year, a group of practicing artists moved in and established a creative hub. A hub which is still thriving today and has become a key player in Liverpool’s contemporary art scene.

Serving as an introduction to the celebrations, this compact exhibition is an historical display housed in the spacious central stairwell, the Vide, prior to entering the main galleries. With broad brush strokes the story of art and artists who have visited Bluecoat, developed and then grown into key influencers across a range of art forms is painted. Carefully setting the scene for the headline exhibition ‘Public View’ which opens on 3 February 2017.

Claiming that Bluecoat was the “UKs first arts centre housing: visual and performing arts; social and educational events; and working studios for artists, designers, architects and cultural societies.” The evidence is laid out in an orderly fashion.

The curators sum up these foundations:

“The idea of Bluecoat as an arts centre began with Sandon Society’s occupation of the building. In 1909, with encouragement from the head of the University’s School of Architecture, Charles Reilly, Port Sunlight soap magnate William Lever (later the first Lord Leverhulme) rented the building from the school with a view to develop it for the arts. When he died in 1925, with no provision in his will for the building, it was put on the market. The Sandon Society launched a campaign, led by Fanny Calder, to save it for the arts. An anonymous donation of £17,000 (from a local solicitor) helped secure the deal and in 1927 Bluecoat Society of Arts was set up to preserve the building for its architectural value and to establish a centre for the arts. This, together with the presence of an arts community twenty years earlier, makes Bluecoat the UKs first arts centre.” – (Bluecoat exhibition statement)

A glass cabinet in the centre of the space holds a variety of historical artefacts including the original deeds creating the Bluecoat Society for the Arts in 1927. Grainy black and white photographs depict, amongst other things: an early photo of Simon Rattle playing drums in the Bluecoat band and a visitor book showing the signature of the Russian composer Stravinsky who visited the gallery in 1934.

As well as historic documents, posters and photographs a few paintings from the early 1900s are exhibited, mainly examples of life drawings from the Sandon Life Room classes in 1935. I was particularly tickled by the letter on the reverse of the satirical painting ‘Sandon Rule 4. To produce Artists for Models’ which read “it was a meagrely attended life class in the old life room. The model was lazy, the night was cold and the 4 of us were not particularly interested…” It is a great little watercolour which normally resides in Liverpool University’s Victoria Gallery.

All in all, this exhibition delivers a myriad of enlightening information that I, as a relative newcomer to the city, did not know. I was impressed by the wide range of activity within the Bluecoat walls over the last century, and the influence the centre has had on emerging artists.

Sneakily, as I was perusing this exhibition I couldn’t help but peek at the ongoing installation work for the visual art exhibition opening on Friday and it certainly looks very enticing. Armed with my new historical knowledge and understanding, I’m looking forward to the rest of the celebrations over the next few months and the gems it will undoubtedly reveal along the way. Happy Birthday Bluecoat!

Art in the Heart of Bluecoat runs until 9 April 2017

Art at the Heart of Bluecoat
1 of 4
Advertisement