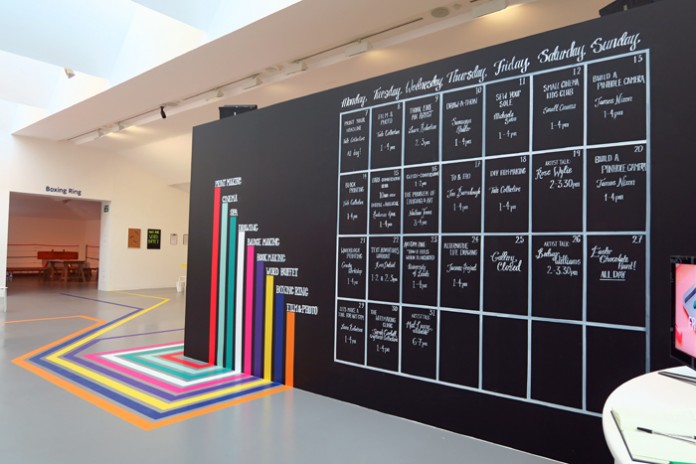 If you’re heading to Tate Liverpool any time soon, you’ll be surprised by what’s upstairs. There’s always some debate over what’s the ‘main’ gallery, but whatever your preference, there’s no denying that what’s happening on floor number four is a little out of the ordinary.

You’ve probably heard of Tate Collective before, maybe seen them running youth workshops, or engaging with the public in some way or another, but through an oddly performative series of ransom notes delivered by them and Assemble (Turner Prize winners, 2015) they have gained control of a gallery more often adorned by Warhol than workshops. But now, rather than pay to enter the gallery space, you will be heading up to a drop in gym, free of membership charges and ties, to simply explore your creative side, through a combination of permanent interactive workshop stations, and specialist artist led events.

It almost seems festival like in its entirety, which I think is a good thing. With something for almost everyone, from complete beginners to practising artists with no limitations on age whatsoever. With workshops designed by local group QUAD collective, Jon Barraclough (one half of the team behind The Drawing Paper – available in the gallery to take away) and Kimatica, whose motion sensing relaxation zone is a brilliant introduction to motion mapping. As well as Liverpool’s very own A Small Cinema offering an excellently insightful film on the creative process.

That’s just a short selection of what’s on offer permanently in the gallery, but what really gets our hearts racing is the event series, which includes audio work by FACTLab’s Radamés Ajna & Thiago Hersan. A live account of tweets and text messages sent from the space will be played back to audiences, which keeps it simple as a piece of interactive work, but heightens by beginning to raise questions of authorship in this exhibition that seems to be shaping into an introduction to art theory.

And as if just learning about it all wasn’t enough, The University of Leeds will be leading a Zining workshop, giving visitors a chance to have their opinions heard through publication, with an editorial workshop from Double Negative’s Laura Robertson to follow. The only flaw to be found is in the wording of some of the workshops. It might not appeal to everyone, using a lot of that dreaded ‘art speak’, which Tate Liverpool tends to stay away from. But do not let that put you off, once you’ve had a look at the events and decided which is for you, each and every one promises to deliver something rewarding and leave you knowing more than when you went in.

So if you’re scared of walking into a craft room, don’t be. Art Gym is an exhibition that uses craft as a warm up for an exhibition that celebrates local culture very publically and challenges creative minds to stretch their stale parts and go for a thought jog through what is either a very warm gesture from Tate to Liverpool’s independent spaces, or the genuine product of ransom notes. But there’s no real way of knowing, so let’s just believe the ransom story. It’s more fun that way.

Check out the full details of workshops, events etc

“If I could be painting, any painting, I’d be a Leonora...