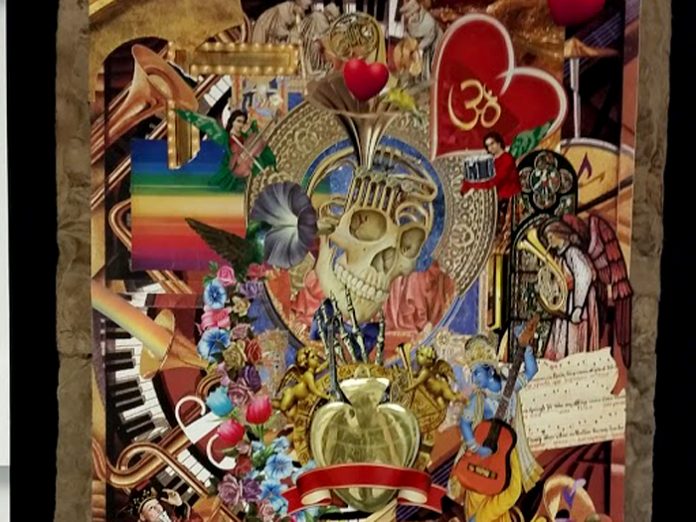 Of Angels and Demons by Ernesto Muniz
Corke Gallery, until 23rd September 2016

The latest exhibition at Corke Gallery is by Mexican artist Ernesto Muniz. These works have all been created since Muniz arrived in the UK in July, and the results are a delight for the senses. The initial impact of each work is a little overwhelming initially, but with attention you can see the thought that has gone into selecting just the right image for just the right place to create an overall effect.

Much of the work is concerned with The Big Questions – love, religion, death. The abundant use of religious imagery is particularly striking, with many works mixing iconography from all the world religions. This is most explicit in OK, I’m Dead, Now What? – one of the more literal pieces in the exhibition, it presents the complete pantheon of afterlife possibilities. On the day I went to see the show Muniz was at the gallery, and happy to discuss his work. He talked about how he wants to show different cultures coming together, in an age where many people want to build walls to divide us.

In this multiplicity of colour and image, the works in shades of subdued greys stand out. This palette is down to Muniz’s extensive use of city backgrounds in these pieces. This mix of colour and imagery initially brings to mind Romanticist ideas of the city as a life-draining, corrupting force. But those of us who live in Liverpool know from experience that this isn’t the case, and the artist would agree. At the centre of each picture, either big and silver, or intricate and anatomically drawn, is a heart. Other areas are illuminated with colour. These are cities which are vibrant, in a way literally living, places to be.

The older works, exhibited in a back room, seems more serious in nature, and some dark elements are carried through into the newer collages – here a man about to jump off a roof, there a young Jesus breaking into to a piggy bank. But the overall sense I took from the exhibition was one of optimism. The piece Entertaining Death is a good example of this – the title suggests the theme, as sober as they come. But Muniz’s inclusion of rainbows and tuba-playing angels suggest that there’s nothing to be taken too seriously here. Life – and death – can be a musical, colourful party, and if you spend some time with these artworks it’s one you’ll want to attend.

Review: It Will Never Work: 25 Years of Urban Splash

Scream You’re in an Art Exhibition: Andy at The Monro