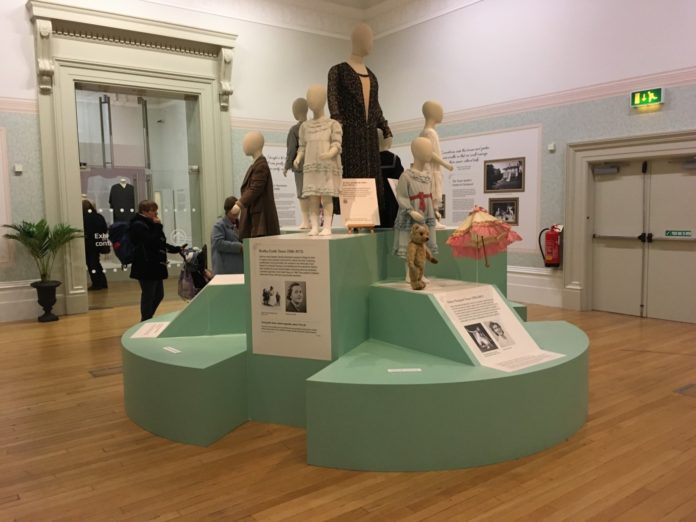 The most compelling insight into the link between apparel and identity that I’ve ever heard came during a documentary film which tracked photography artist Spencer Tunik on his quest to create one of his signature semi-abstract group nude pictures in each of America’s fifty contiguous states. His work features large collections of unclothed people shot from distance and arranged in a creative flourish of humanity. In the film the reactions of his subjects ranged from severe discomfort to a sense of liberation. The flash of insight came from a confident man in early middle age who spoke with a disarming philosophical detachment, stating “people believe they are revealing themselves when they take off their clothes. Actually we reveal more about our inner selves by what we chose to put on.”

And it’s this concept of using an individual’s clothing as a window into their world which sits at the heart of the exhibition “An English Ladies Wardrobe” currently on show at The Walker Art Gallery. Here, through a forensic dissection of a colossal clothing collection we are given insight into the life of a lady of Merseyside high society in the early twentieth century. As well as the surface level glamour of the glittering fashions on show we are given an insight into topics as diverse as societal hierarchy, global economics, technological advancements and gender politics based on the influence they had over one woman’s wardrobe through a tumultuous period in modern history.

The wardrobe in question belonged to Emily Tinne (1886-1966), wife of Frederic Joseph Tinne, the heir to the Tinne sugar dynasty fortune. Born in Calcutta, the daughter Scottish Presbyterian missionaries; she had lived and studied in Edinburgh before meeting Frederic through her Uncle who lived in Liverpool. Frederic opted not to go into the family business, instead becoming a doctor and the couple lived in most of their married life in a mansion in the Aigburth area of Liverpool; they had seven children, with sadly only six of them living to adulthood. As part of the Tinne family, the pair held a prominent position within local society with the family believed to have been the owners of the first car in the region – a Daimler Rimenwagen.

Although Emily had been known as an elegant member of the Merseyside elite, the full extent of her clothing collection was not realised until after her death in 1966, when over 300 storage chests of garments and accessories were discovered in her home, some unworn and still in their original packaging. Over seven hundred pieces are on display here, augmented by insightful context offered by the family’s letters and photographs which have also been preserved.

The exhibition begins with an introduction to Emily and her immediate and extended family and their back story. Immediately we are thrust into a world of dynastic wealth and social hierarchy; the Tinne family of sugar merchants had originally hailed from The Netherlands and had settled in the port city of Liverpool in 1813. The centrepiece of this introductory area is a display of one piece of everyday wear from Emily and six of her children, creating a sense that we are literally being introduced to the family.

Following this introduction, the exhibition proper begins in the second room, with an extensive display of every imaginable type of clothing and accessory. Following an initial highlights section, the exhibition is split into categorised sections beginning with Daywear, Swimwear and Furs, with changing attitudes to animal welfare highlighted through the pelts on display as well as different attitude to body exposure seen in the bafflingly impractical and comprehensive woollen bathing suit.

An early highlight is a black tunic top made in China from the early 1920s, when there had been a short lived trend for clothing from the Far East.  The uniquely oriental cut and shape of the piece makes it stand out and the long-line black silk satin body is embroidered with a repeated metallic thread motif featuring cherry blossom and typical curved roofed Chinese pavilions. To the modern eye the images depicted in the delightfully intricate embroidery feel slightly clichéd. However, this acts as a reminder that images of this type would have been an exotic revelation to most contemporary eyes and pieces such as these would have only been accessible to wealthy fashion conscious port city residents.

The exhibition continues with sections on underwear, children’s wear, outerwear and hats – with the charming (if slightly misguided) story that the reason Emily bought so many expensive coat was to ensure the retail staff got their commission which was a lifeline during the great depression. Throughout the pieces are accompanied by insightful commentary, drawing out the fashion, technical and material elements as well as how each artefact reflects the wider social and economic context. The selection of the garments and their descriptions represent an outstanding achievement by the curators and the supporting team; the expertly displayed exhibition is only slightly let down by the overly twee 1930s decor and cringe worthy murals of contemporary scenes.

A prevailing theme called out in the exhibition is the uncomfortable attitudes within contemporary society towards how women should dress. During the Renaissance, many regions on the Italian peninsula went as far as having formalised rules on female behaviour and attire and the prevalence and impact of the patriarchal attitude that women’s clothing reflects their morality is evidenced throughout the exhibition. Although the thread is that attitudes became more liberal over the time period depicted, we are clearly shown the anachronistic notion that a women’s choice of clothes should be the subject of societal influence and concern.

The clothing display concludes with a dazzling selection of extravagant eveningwear, before we are treated to an overview of the retail landscape of the Liverpool of yesteryear in the final room. Featuring floor to ceiling fly-posted boutique advertisements, the section gives a thorough overview of each of the iconic retail outlets of the day. Archive photography provides a nostalgic glimpse of the city centre between the wars, focused on its legendary department stores – including Bon Marche, Owen Owen’s and Lewis’. Again, changes in attitude and convention are displayed through the quaint extravagance on show.

On the whole, as you would expect, this exhibition is primarily for those with an interest in the history of ladies fashion and is a must for all committed fashionistas. However, as well as the technical and aesthetic interest provided by the garments and accessories, the broader context explored of Liverpool in the first half of the twentieth century will appeal to anyone with an interest in the history of Merseyside. Through Emily Tinne’s wardrobe we are given a compelling portrait of an English lady and just as Spenser Tunik’s philosophical subject espoused, much can be learnt about a person and their life and times by examining how they chose to adorn themselves.