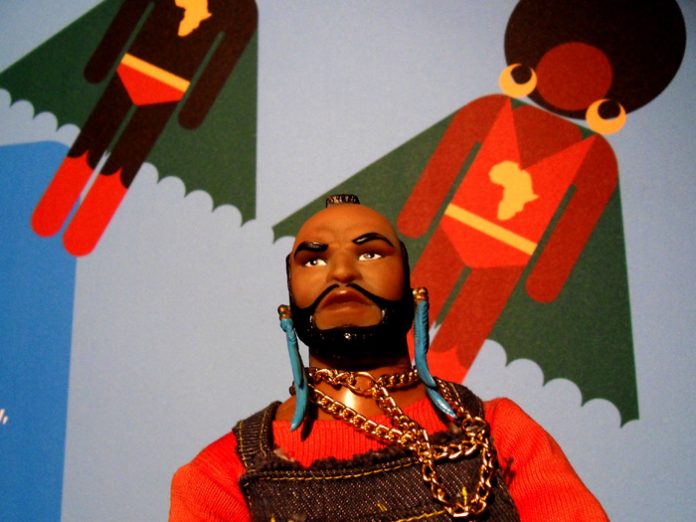 To mark the 50th year or Barbados’s independence, and to celebrate his 50th birthday year, artist and collector, Jon Daniel proposed a truly cross cultural exhibition that merges black history and comic book fandom. He’s even managed to work a little local history in too.

One of the reasons for the exhibition’s existence, and for his collection’s existence, is a dedication to knowing a transatlantic culture, which as a British kid in the 1970s was fairly hard to find. He comments on both the quantity and the quality of the representation of black people in pop culture, in this exhibition which promises to hold the interest of anyone walking through the door.

“It can be quite heavy, but it welcomes you in. You walk in. You smile. Then there’s the Black Panther Party.” Jon Daniel is quick to remind people that there is a serious message wrapped in his nostalgic collection. A message that includes a talking Nelson Mandela action figure and historical comic strips dedicated to people who epitomise black history, including some who are still causing furores on social media today, like the recently celebrated Harriet Tubman, who found her place on the twenty dollar bill last month.

In its setting, on the third floor of Liverpool’s Maritime Museum, surrounded by the formal history of the International Slavery Museum, the black comic book characters that make up most of this story present a clear development in black pop cultural history that even today struggles to defeat it’s stereotypical representations (with Falcon being the only black Super Hero not to wear the word black in his name).

The exhibitions curator, Stephen Carl Lokko, made the point that these characters had a clear story to tell as not just comic heroes, but cultural heroes, as well as political ones were the likely stars of this show. “Even at Liverpool’s first ever Comic Con,” he explained, “the biggest queues were for the stars of Red Dwarf,” pointing to an issue of Smegazine printed with Craig Charles in character on its front cover. No super hero maybe, but a local star who if nothing else got the scouse accent on TV, providing inspiration and aspiration for generations of black kids growing up in Liverpool, when there were very few opportunities to see someone like themselves on the small screen at all, let alone the silver one. That little spark of a local Afro Supa Hero might be the thing that draws that spark out in this show too.

Jon Daniel’s own creations, the Afro Supa Hero comic stars of the future, are hoped to, as he put it “embrace all that culture, all that history and embrace it into a populist brand. Black and white, young and old. It seems to capture the hearts of everyone.” The vision, then, is for a hero that transcends gender, genre and cultural divides, and continues to present an unspecific hero figure for people to relate to as the face of an issue which should have a figure. In a sense, it’s a call to arms for future heroes, but also a celebration and settling of the arms of past heroes.

Whatever politics it inspires or calls upon though, it is an engaging and inspiring walk through history, which uses nostalgia as a welcome mat, and is thoroughly worth a look. If you want to extend on the exhibition further too, there will be a publication available to purchase from the museum, which expands even further on the incredible history already on display.