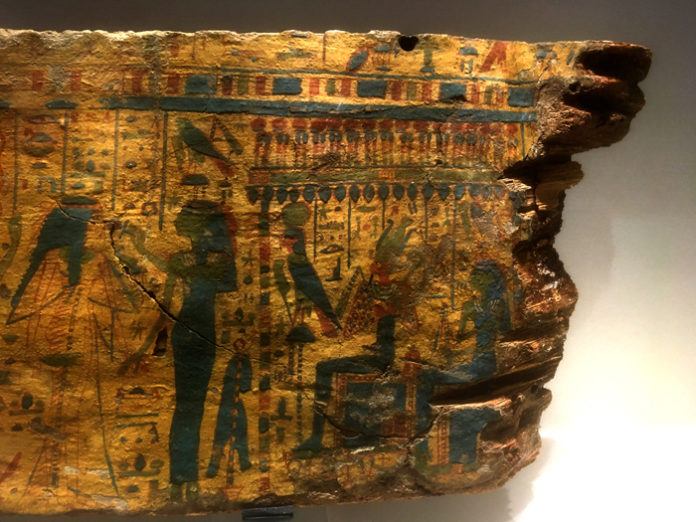 Review: Adventures in Ancient Egypt: Mrs Goodison & Other Travellers
The Atkinson,
until March 2018

Egypt’s become a big theme across Merseyside recently, with new additions at World Museum, and Tate Liverpool’s brilliant Surrealism in Egypt. It must be coming back into fashion, as The Atkinson have put their spin on it too.

World Museum are showing a fairly broad history of Ancient Egypt, while Tate Liverpool have a fairly contemporary display of Egyptian Surrealism. The Atkinson brings it local though, with the eccentric Mrs Goodison’s personal collection of Egyptology.

Since Bootle Museum and Art Gallery closed in 1974 the collection has lived in storage, waiting for its day in the sun. And thanks to the determination of The Atkinson (and a big chunk of Lottery funding) her hugely decorative archive has gone on display once more.

Born in West Derby in 1845 as Anne Padley, she lived a fairly quiet life, settling in Waterloo, with very few records of how she came to have this incredible collection. In the 1860s she married George, a civil engineer whose name has lived on in more than his wife’s Egyptology collection.

George, a Civil Engineer, laid the sewerage system in Everton, and was thanked with a road in his name, later giving its name to Goodison Park. So while there might not be many links between Everton Football club and Ancient Egypt, that’s one that can stick with you, and hopefully serve you well in a pub quiz someday.

Anne, however, in her quiet way, continued building fascinating relationships, most notably John Ruskin, who by way of chance was her next door neighbour at their rented cottage in Coniston. Whether that connection had any effect on her decision to start this collection is unknown, but there are records of relationships with British Museum that had a significant impact.

The display at The Atkinson has been a long time coming, and will no doubt be drawing crowds to Southport with its immaculate display. There’s loads to do for school groups, and the collections spills out into even more incredible examples of unheard histories from the Sefton coast.

Adventures in Egypt continues until March 2018.

Review: From Warhol to Walker, at The Atkinson