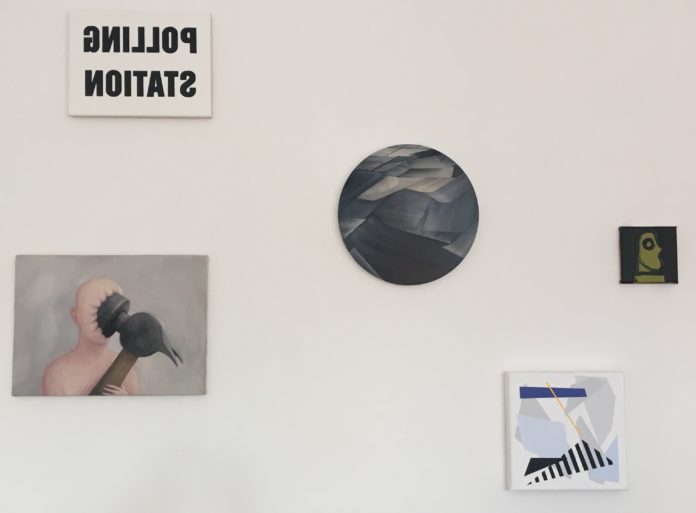 The title and location of this exhibition is intriguing and its promise of something unusual does not disappoint. It is immediately clear that the art has something to say and is not there simply for adornment of the office walls.

Josie Jenkins, one of those included in the show, brought the other 20 artists together.  The “little” in the title is not indicative of modest ambition but applies only to the 30 x 30cm maximum size Josie stipulates when inviting an artist to take part.  Anna Ketskemety, another artist in the show, has done a good job in curating the works, giving each of them a chance to own its space.

Josie has organised other such gatherings of experienced artists to show their little paintings but on this occasion the idea to exhibit in Anfield came from The Dead Pigeon Gallery.  This is a travelling Gallery run by artist Jayne Lawless and designer Catherine Dalton.  They host exhibitions in unexpected places, the name coming from their first show in an abandoned warehouse, which involved them cleaning up years of dead pigeons and their mess.

Dan Carden, MP, has collaborated with Dead Pigeon before and one can only hope that his supportive way of combining art and politics might be something more MP’s will emulate.  Ian Byrne, the Office Manager and Local Councillor, says they’re delighted to be hosting another show: “It’s all about demystifying politicians, making people feel comfortable and it contributes really well to our open door policy”. 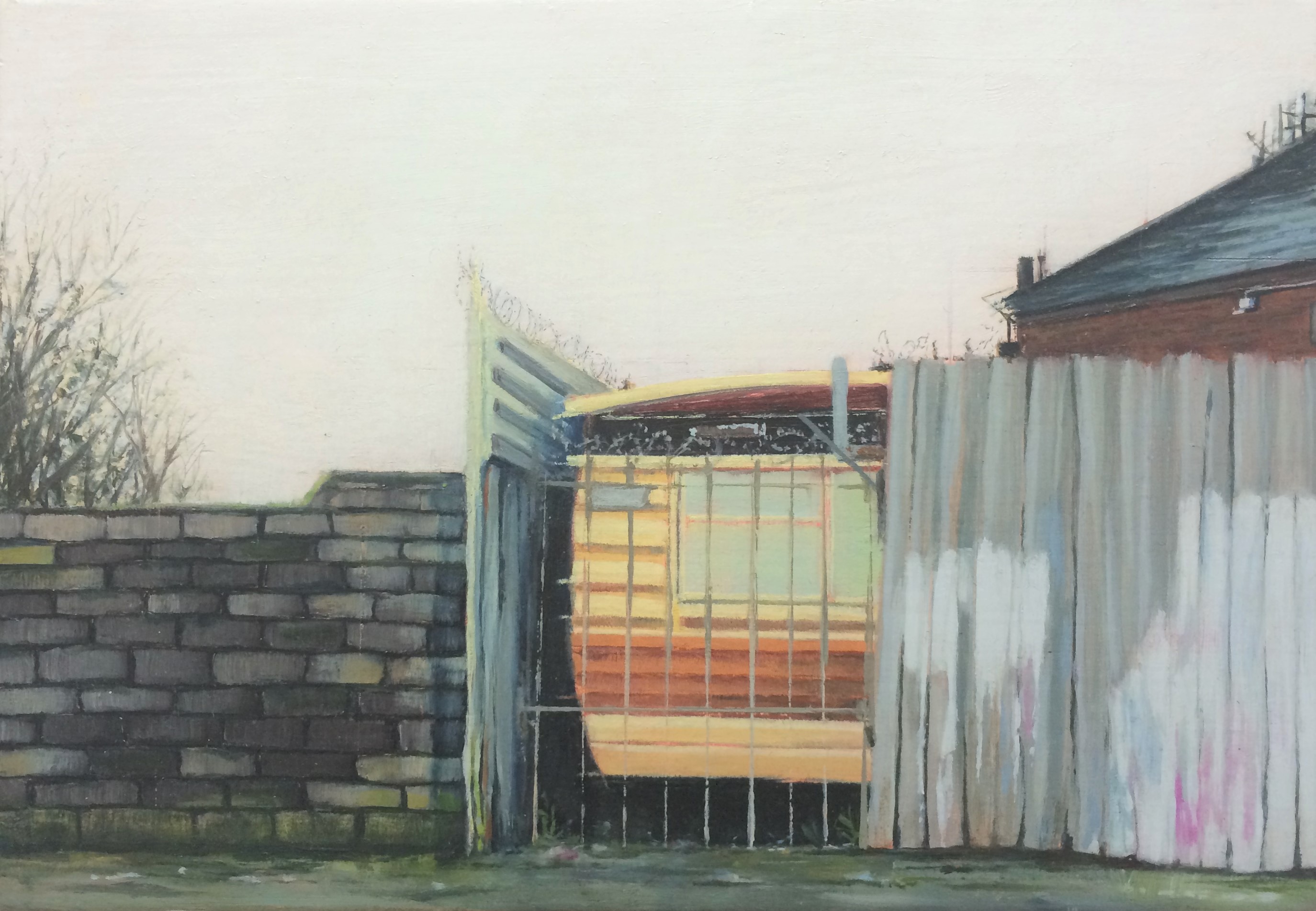 Making art more accessible is at the heart of Dead Pigeon’s ethos, as Jayne explains: “We still see a big class divide when it comes to the arts. As working class artists ourselves we feel we can encourage and inspire others to come through and have a voice in creative industries. By putting exhibitions in non-traditional venues we stimulate viewers into extra layers of debate and dialogue around the work itself and its temporary home”.

Max Mallender’s work often has a temporary home; he is known around Liverpool for his site-specific interventions and graffiti: “My goal is to harness the power and spontaneity of illegal creativity, and to utilise it with humour and love”.   There’s nothing illegal about his work here but it has an appealing, subtle anarchy to it.  “Let Me Think” – acrylic and ink on un-primed, folded canvas held at the corners with cable ties and a couple of staples.

Daniel Newsham’s piece “Polling Station” is in a most appropriate setting given its reference to elections. Its back to front depiction of the title words reflect what many a political pundit has suggested – that a lot of politicians need to hold a mirror up to themselves.

With these shows of small scale works, Josie has found a way of interacting with the painters she admires and of bringing their art to a different audience: “Nobody ever says ‘no’ when I approach them, which is trusting of them and so generous because they don’t get paid for being in the Show”.  She adds that the paintings are for sale but “the main aim of the shows is just to get the work out there”.

It is a wide range of styles she has brought together in Anfield, making for a stimulating exhibition.  To give some examples: Bryan Hible’s realist technique, David Lock’s collagist approach to the male figure, Lindsey Lavender’s architectural background reflected in overlooked aspects of the built environment, Ula Fung’s use of Chinese Paints on Silk, James Quin’s Repetition from Reproduction (after Matisse), Sarah Gilman’s exploration of the still life through trompe l’oeil … all the artists here prove without doubt that the medium of painting is alive and well and that it can be pushed in unexpected directions.

Quite a few of them have received recognition of their work through significant prizes, among them Josie herself: the Valeria Sykes Award, New Lights Art Prize 2013 and ‘Best Landscape’, in the 2012 West Lancashire Open.  Another is Keith Ashcroft, who received a Special Commendation last year in the prestigious Contemporary British Painting Prize.

This Show is a great opportunity to see what’s happening in contemporary painting.  It’s also worth spending time exploring the websites of the exhibiting artists, details of which are available from the organisers.

The exhibiting artists are:

The Show is on at the Office of Dan Carden, MP, 66 Priory Road, Liverpool, L4 2RZ. It is open by appointment until 1st November through Josie Jenkins josiejenks@yahoo.co.uk or Jayne Lawless jaynelawless7@gmail.com. There will also be some open afternoons in September and October. Dates to be confirmed with the organisers.