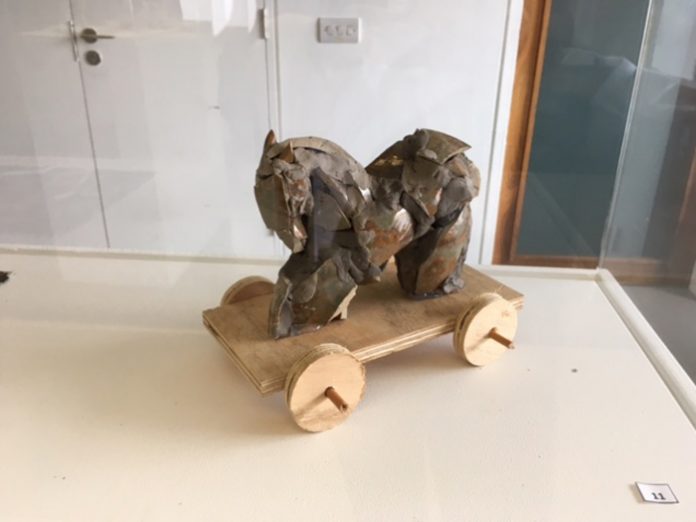 Exhibition Relics: The Independent thread coming to a venue near you.
Tate Liverpool, 3rd-18th September 2016

The subject of Greece seems to have taken hold of my imagination in more ways than one. I’ve staring looking across the city taking in the classical and antique inspired architecture that Liverpool’s philanthropists brought to the city. Buildings such as the Art Deco Ventilation Tower built in the 1930’s opposite Mann Island that recycles the Mersey Tunnels motor omissions.

Down on the ground more specifically at the Tate a small Greek inspired underground exhibition lurks the ‘Soup Collective International’. Beautifully inspired the seventeen recycled pieces on display are derived from clay and broken ceramics. With references to a Greek Odyssey the crafted fragments may be read as channeling life forces across the city outwards towards the sea. This is a small-scale meets large-scale exhibition. This duality between the Liverpool Biennial and the fringes like all good yarns offers further narratives thread spun towards the past but with a contemporary twist.

SCI is headed by Wendy Williams and is an evolving project.  Her recent exhibition MOIRAI with two other artists Catherine Harrison and Jackie Kerr was a forerunner to this present exhibition. This yearly call out for local artists at the Tate brings the pieces chosen for the exhibition to life attempting to capture Greek mythology and cleverly uses the museum format. There is a sense that these sacred objects are to be enclosed in the cabinet of curiosities.  https://sciartistprojects.wordpress.com

Contained in one of cabinets is ‘The Trojan Horse’ by Keiron Finetty, wonderfully crafted and set on a wooden base. It is set in patchwork applied clay and ceramic, its eyes as if blinkered by its fate.  Enslaved in a heroic destiny and possibly as a mythical narrative. Once a warhorse always a warhorse!

In another, Tifany Kendel’s relief part – human part- vessel with illustrated asp, is titled ‘The land of the Furies’ and alludes to mythical creatures coming up from the earth to seek revenge.  Her work pays a cheeky reference to the mythical furies in Francis Bacon’s portraits, a knowing wink to the art on the fourth floor. In contrast, Jackie Kerr’s  ‘Compass Rose” is set on mystical premises. As if the gods have spun their wrath and time travelled like the Oracle of Delphi seeking Jason only to land on fragments of maps. Maybe he’s nearer than she thought!

In contrast, Wendy’s own sculptured artwork – a glistening white clay male figure sitting in true philosophical thought, the weight of the universe on his shoulders. The piece is called ‘The Birth of Icarus”.  This prequel also has a moral tale about beauty lost, love and tragedy. In Wendy’s version of events it’s the insect that seeks revenge. This intricate, terrifying and yet somehow fitting piece crafts a tale of regeneration and sums up the mood of the exhibition.

Choose your own thread, there’s plenty more where that come from. I’m off to buy some Greek sandals, book a packaged Greek holiday and re-read Homer, doh.