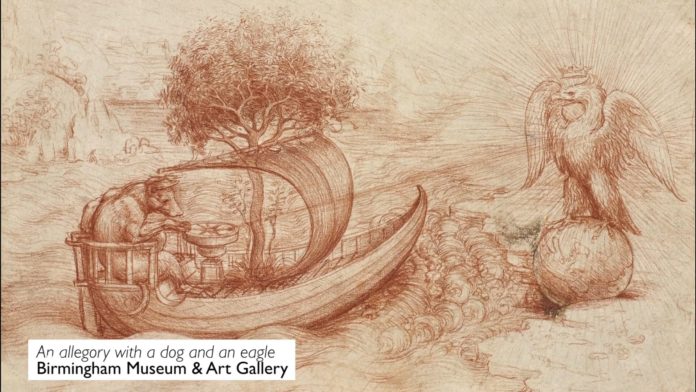 Twelve sketches from an art world superstar. Twelve national galleries. One simultaneous opening night. This is the plan for February 2019, to celebrate the 500th anniversary of Leonardo Da Vinci’s death.

The brainchild of Martyn Clayton, Head of Prints and Drawings for the Royal Collection in Windsor, this is a massive undertaking and has only been made possible by the solid partnerships that have developed between the Royal Collection Trust and many key art institutions throughout the UK who are happily rising to the challenge.

Clayton says ‘by doing it this way most people in England, Scotland and Wales will only be 1.5 hours away from a Da Vinci’ in 2019. Visitors will also be able to see other Da Vinci sketches by travelling to nearby galleries, so, in effect you will be curating your own experience.

Leonardo Da Vinci is probably best known for his enigmatic portrait of the Mona Lisa which hangs in the Louvre in Paris. However, he was so much more than a painter: he was a scientist, a designer and an architect too. An all-rounder and a very talented one at that

Five centuries on and Clayton is determined to showcase the breadth of Da Vinci’s incredible work. The plan is to display a selection of twelve sketches (each) in twelve cities across the UK including Manchester, Glasgow, Cardiff and of course Liverpool, in the Walker Art Gallery. All of which will have their opening event on the same date, something which could prove to be a logistical nightmare as a member of the Royal Collection Trust will need to be represented at every opening!

I was invited to a drinks reception at the Walker Art Gallery earlier in the week to hear more about the exhibition destined for Liverpool, so I ‘ve enjoyed a sneak preview of the works which will be coming to the City. However, before I tell you more about that I will let Clayton explain what he and his team are hoping to achieve.

‘We are aiming to bring Da Vinci’s sketches to the widest ever UK audience, including the scientific and digital communities as well as traditional art audiences’ he says, ‘We want to give people, who may not have spent much time looking at the breadth of Da Vinci’s work before, the opportunity and space to absorb it’.

Connectivity is the key here. He wants people to ‘slow down, to take a close look at the drawings, to walk away from each work, and to come back to it again. For visitors to make connections for themselves, and not be told what to think. There will be interpretation, but it won’t simply be a straightforward narrative, viewers will be encouraged to draw their own conclusions’ he tells me. So, the idea is for a very thoughtful exhibition as well as a beautiful one.

The Royal Collection Trust owns over 600 of Da Vinci’s sketches and ordinarily they sit in air-conditioned library rooms carefully bound and stored away, only being viewed by appointment with scholars and researchers on a one: one basis. Next year however, with great care, they will be dusted down and transported to the public galleries for everyone to see…up close. No barriers (other than the glass in the frame) and no ropes or devices to keep people at arm’s length apparently.

So, how was the decision made about what works went where? Clayton says he:

So, it was a random approach and the individual galleries did not have the opportunity to select their own choice of sketch at the time. This seemed to be the fairest way of allocating the images.

The challenge now is to ensure that the Da Vinci sketches allocated, also complement each Gallery’s own collections. I am assured that the Walker Art Gallery team has worked hard to deliver this in Liverpool, and in fact Clayton says, ‘Liverpool has the best selection’, which of course I am sure he will tell every Gallery, but that’s okay. It’s master level diplomacy but his love of Da Vinci shines through it all.

Now, what do we have in store at the Walker Art Gallery in February 2019? Well, Clayton outlined all twelve works with little anecdotes about each, but I don’t want to spoil it for you, so I shall only pick out four of them:

This is a drawing in metal point which enables incredibly fine details to be scratched onto the surface of the paper. It is probably one of the most beautiful drawings he ever made.

The image captures the fall of light on the horse’s body in a way no other artist could do at the time. The drawing was a study for a huge sculpture he had been commissioned to make in Italy, where he was living at the time. He spent five years working on it and had made the mould ready for casting when the French invaded and confiscated all the bronze! Sadly, after all this painstaking work, the sculpture was never made.

This is a study for a painting which was completed, and it focusses on the intricate details of Leda’s braided hair.

Unfortunately, the finished painting was hung in a royal bathroom which meant it became very damp and damaged the canvas, so it decayed irreparably over the years and did not survive to the present day.

Anatomy was a field he devoted a great amount of time to. Whilst living in Milan he dissected 20 human corpses, carefully peeling back the layers so he could understand how the body was constructed. This was an unknown fact at the time and these anatomical studies only came to light in the 1900s.

This is a study of the turbulence of water, he tried for years to capture this movement, it was something that clearly fascinated him.

It is interesting to note in this sketch: the evidence that it was for his eyes only. In the centre of the work there are handwritten notes which flow from right to left. He wrote this way because it was easier for him being left handed and was not intended for anyone else to read.

So, there you have it – a flavour of the delights in store for you in February 2019. Small but beautifully formed…or is it?

The challenge for the gallery team now is how to display the sketches to best effect. These works are individually quite tiny, and the Gallery space is anything but, so there are curatorial and interpretive challenges to be solved to ensure it will be an engaging and thought-provoking exhibition.

Who knows how it will be finally presented, but I, for one, am very much looking forward to seeing the end result. Roll on 2019!

Exhibition runs at the Walker Art Gallery, Liverpool from 1 February – 6 May 2019

The other 11 cities taking part in this are (in no particular order): Manchester; Sheffield; Derby; Glasgow; Belfast; Cardiff; Sunderland; Bristol and Birmingham.

The sketches will be displayed at Holyrood Palace in Edinburgh and in London later in 2019.

A Look Back at Light Night at ROAD Studios