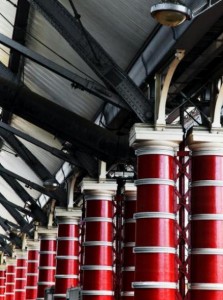 Landscape Photographer, and his exhibition entitled Another Look, presented at one of Liverpool’s foremost independent galleries, Domino, focused on architecture and explored new ways of seeing and interpreting local buildings.

Higgins’ work explores lines, textures and exquisite details on some of the city’s most loved and hated buildings, encouraging the viewer to regard the subjects in new and probing ways. Speaking with Higgins himself, I discovered his love of architecture and desire to capture these buildings in ways never before seen, as well as the importance of timing in his work: Higgins is a photographer in the traditional sense, capturing images as they happen, rather than using Photoshop and other editing software to enhance his work, and in this age of digital media, this is truly admirable in an artist.

The exhibition features a range of works including colour, and black and white images. Higgins states that he believes the colour palate of the photograph depends on the subject, and rather than choosing to work in one specific medium, he decides whether his work should appear in colour, or monochrome depending on what the subject demands. A beautiful example of his choice for black and white is ‘Chinatown’, an image of the infamous Chinese Arch on Berry Street, which takes on an epic grandeur in the image, creating a symbol for the community to take pride in. The lack of colour makes the structure itself the focus of the image, rather than the lavish and bright decoration, and the viewer is stimulated to appreciate the engineering of the landmark. 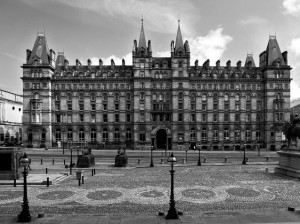 Another excellent monochrome photograph is Higgins’ ‘Former Lime Street Station Hotel’. What I liked about this image, is that the attention, for once, is on this building rather than its neighbour St George’s Hall, which often steals the glory and renown. The Former Lime Street Station Hotel is a beautiful building, in the Bavarian style and would look at home in any major German city: its architectural design is beautifully elegant, almost perfectly symmetrical, and the tall rooftops reach right into the clouds, as captured in this photograph.

Some of my favourite colour images from the exhibition include ‘Columns, Lime Street Liverpool’, which depicts the little-noticed pillars around the interior of the station in a vibrant candy-cane red, making them look almost like enormous Roald Dahl creations. I also appreciated the colours in ‘One Park West’, despite usually hating this building, but this is a brilliant example of the way Higgins’ work makes you take another look at the city. One Park West is depicted as a ship cresting a wave, as the curve of the building inspires an almost mythical composition, imposing itself in an arch across the image. This is a prime example of where Higgins work looks to have been adjusted in terms of colour and contrast, but the image is completely organic, and the dark, stormy colours are the result of a perfectly timed shot. 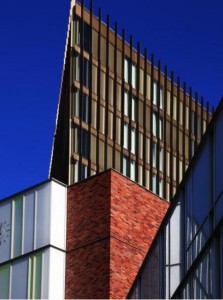 In the same way, the colours of ‘Liverpool One II’ are incredible: the vibrant blues, golds, reds, silvers and greens bring to life a building better known for the chain stores which inhabit it, yet Higgins’ work again shows the unseen beauty of buildings that we pass every day. The angles depicted in this image are also stunning, creating a geometric tapestry of design genius within the confines of an oblong print. Similarly, Higgins captures beautiful golds and blues in his representation ‘Bling Bling Building’ (Hanover Street), but the image is not as perfectly pristine as the former: I questioned Higgins as to his views on editing, as in the window there is visible a pedestal fan. Higgins’ response was that if he took this out, the image would be a lie; it would not be a true representation of the building as it was on this day, and that it is important to maintain the story within an image. The inclusion of the fan and other shadows in the window creates an ethereal, ghostly scene behind the glamorous gold exterior, and a sense of mystery is constructed.

The ‘Bling Bling Building’ also plays with perspective, as the window appears to tunnel in, whilst in reality it stretches out over the street, and this M.C. Escher-style fascination with perspective is carried through to Higgins’ photograph ‘Black to White’, which depicts what seems to be two buildings intersecting. The photograph is intriguing and absorbs the viewer in trying to deduce what is solid from its reflection, and is a nod towards Escher in that the lines seem to weave and cross infinitely, producing a web of bars and shadows to interpret and decipher.

Finally, I enjoyed Higgins’ take on the Echo Arena. In a picture entitled ‘Echo Arena I’, Higgins explores the contours of the building, taking a close up of the side which contrasts three disparate textures, bringing them together to highlight the level of detail on this huge structure. The layers of lineage and texture cement to create a mosaic effect, encouraging the viewer to appreciate the finer components of the arena. Similarly, Higgins explores this in black and white in ‘Arena and Wheel’ which presents the two landmarks as neighbours leaning towards one another over a fence, as he has chosen to compose the image using the edge of each structure, making them appear close and intimate companions, which brings these inanimate giants to life.

Aside from the work itself, respect must be paid to gallery owner Felicity Wren for curating the exhibition and displaying the work in such an innovative and sophisticated manner, so as to present Higgins’ photography at its most provocative and striking best.

Another Look encourages the viewer to explore local buildings which we are familiar with in a totally unfamiliar and original way, and succeeded in finding beauty in those structures that we often find ugly and out of place. Higgins’ work depends on timing and an eye for detail, which results in his triumphant rendering of some of the most famous, and most disregarded buildings in Liverpool, and questions our preconceptions about the imposition of modern architecture on our beloved historical city.