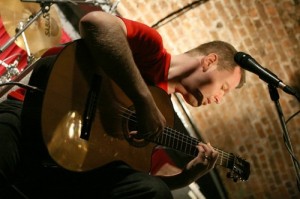 Let Neil Campbell’s mastery of traditional Spanish guitar transport you to the continent, as this prolific, yet underrated local musician takes up residency in Mathew Street for one night only.

Music is an art form usually neglected by our website, but as this particular performance took place in the View 2 Gallery, I felt that the artistic setting qualified Campbell for inclusion at Art In LIverpool.

Campbell’s work spans, as the title of this concert suggests, an assemblage of his own original compositions, as well as classic Spanish guitar pieces, adapted in his own unique style.

‘Classics and Originals’ was hosted by the View 2 Gallery in Mathew Street, an intimate venue tucked away in the heart of the city’s musical epicentre. The stage was set in such a way as to allow the audience to feel close to the performer, with tables and chairs surrounding a modest arrangement. The room was lit by candlelight, creating a celestial arc of light, which set the scene for the beauty to come.

Campbell opened with the Classics, drawing on a selection of composers including Francisco Tárrega and J.S Bach. My favourite piece from this half of the performance was his interpretation of Beethoven’s Moonlight Sonata: Adagio, which was pure genius; Campbell’s picking technique is the work of a true musical master, his fluent style producing undulating notes which combine to create beautiful and innovative melodies. From here, Campbell only grew better, as his passion increased over the course of the night, and the pieces progressed to more fiery, emotionally charged, violently presented works of art.

This prodigy’s appeal lies in his humility, as during the interval between sets, he took the time to meet each member of the audience, introducing himself and enquiring about every one of us. He spoke candidly about how he prefers gigs such as this to huge arena crowds; performances like tonight have the potential to really touch an audience, and you can feel this resonate with his loyal and devoted fan-base.

The second half of the show was as full of Latino passion and energy as the first: Campbell’s original compositions take the breath away, as one wonders how a Liverpool-born musician can produce such exotic aural pleasure. His own piece entitled In and Out of Day, Out and into Night was captivating, with incredible chord changes and progressions, making the piece truly remarkable as an instant classic.

The final medley to be performed was entitled Through the Looking Glass, the 3rd piece of which I felt hugely drawn into. Campbell has the unique ability of captivating a room with a single instrument, and although during his other musical endeavours he would use loops to enhance the sound, here he relied solely on an acoustic guitar, managing to create the illusion of multiple instruments playing one piece.

Following such a show, Campbell went on to perform an encore, after a standing ovation from the entire, enthralled and awed audience. We are all converts and this is truly music to lose yourself in.