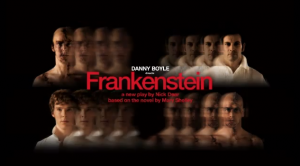 Danny Boyle’s production of Frankenstein at the National Theatre achieved superb reviews and initiated a demand for a repeat performance on an unforseen scale. National Theatre Live is an idea which has opened up the theatre to a whole new audience: not many of us can afford theatre prices, let alone train fare and accommodation in London, so this initiative involving the screening of performances in cinemas throughout the UK is inspired. Although theatre is not our usual subject matter at Art In Liverpool, I feel that it is important to draw attention to National Theatre Live, as their aim is similar to our own of raising awareness about art in the city, and encouraging people to experience what may not in the past have appealed to them. This screening, (as well as a whole season of other performances) appeared in FACT, which is one of the key art venues in Liverpool and one our site often mentions, catering to a range of artistic forms that it is important to appreciate in their entirety.

The screening began with a short introductory film, exploring the themes of the story and the adaptation process from Mary Shelley’s original 1818 novel of the same name. This film provided insight into the minds of director Danny Boyle and writer Nick Dear, as well as a fascinating look behind the scenes at the actors formulating their characters. What is interesting about Boyle’s production is the sharing of the two main roles: both Benedict Cumberbatch and Jonny Lee Miller play the Creature, and Dr Frankenstein on alternate nights, in order to explore the connection between creator and created, man and monster.

I attended a performance in which Cumberbatch appeared as the Creature, and Miller as Frankenstein, and was utterly blown away by both performances. Cumberbatch’s physicality as the Creature is incredible, and morbidly beautiful. The opening sequence sees his birth and subsequent struggle to realise who or what he is, and how his body works. As Cumberbatch strains to manipulate his new body and walk on two legs, he appears grotesque and fascinatingly attractive at once. These qualities are then addressed through the people he encounters, including Frankenstein’s family, and the old blind man.

A lovely sequence is the story of how the Creature meets and befriends an old blind academic, De Lacey, played by Karl Johnson. Their friendship is the only example of beauty in the Creature’s life, and gives him hope, as he is taught to speak and read great authors, as well as feed and become a man. The journey from grunts to speech for Cumberbatch is arduous and fraught with emotion, and his interpretation of this learning process is also at times darkly comic. Cumberbatch and Lacey have great comic interplay in these scenes, as the Creature proves how fast he can learn (picking up sarcasm and humour without De Lacey’s realisation), as well as plenty of tender moments. Their talk is of creation, destruction and original sin, and the topics that they discuss are reflected in the set design, as De Lacey’s house is adorned with images which could have been taken from the works of William Blake, who wrote about similar themes.

The set design is fascinating, with the stage itself a huge circle. This is symbolic of time, but also of the circle of life and the cyclical nature of creation, which are key issues in the text. The stage is stunning in its simplicity, yet designer Mark Tildesley has masterfully created a fully functioning machinery beneath the depths, transforming the performance area from cliff edge, to green field, to railway track with one graceful swoop. Boyle employs the use of the entirety of this space, allowing his actors to explore the landscape of the stage whilst experimenting with their roles. The most beautiful part of the staging were the hundreds of light bulbs in a swarm above the stage, buzzing with life and magic. The lighting was ethereal yet mechanical, again highlighting the juxtaposition between two of the main themes of the play, and charged the performances with an intangible fuel through the buzz and hum of the bulbs. The costume and make up were also astounding, especially the sutures and scares on Cumberbatch’s body, making him an object of pity, intrigue and disgust, highlighting how we can be so prejudiced based on appearances.

Jonny Lee Miller was great as Frankenstein, a role involving less spectacle, yet he delivered a seamless performance with aplomb. The supporting cast were also great, most notably Naomie Harris as Frankenstein’s fiancée Elizabeth. The band of industrial workers on the train at the beginning were fantastic, and we have Director of Movement Toby Sedgwick to thank for the flawlessly choreographed set pieces. Andreea Padurariu was also beautifully fragile as Frankenstein’s female Creature, and her movements were graceful and delicate, making it clear why Cumberbatch’s Creature would fall in love with her, and again, Sedgwick proved indispensable in her role’s creation.

The music throughout was brilliant, with a range of choral, godly moments, intersected with the African drumming motif which symbolised creation and development, playing at significant intervals during the performance. The other major musical motif was the industrial, steam pump sounds issuing from the train at the beginning, yet also used to describe the workings of Frankenstein’s brain: mechanical and loveless. This is a tale of tragedy in both cases, as the Creature and Frankenstein’s fates are inextricably intertwined, as the two men represent two sides to the same being.

National Theatre Live is a wonderful idea, and although a screening could never fully replace the electricity of a live performance, it makes theatre accessible to all. Boyle’s production of Frankenstein is astounding in terms of performance, design and direction, and Cumberbatch has proved himself to be a true acting genius.

Review: Body Image at The Brindley