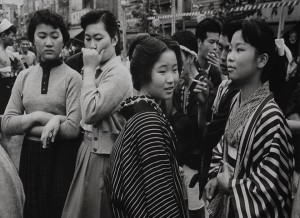 On hearing of the bombing of Nagasaki in August 1945, Japanese photographer Hiroshi Hamaya took his camera outside his house and photographed the sun. It was a memorable moment; marking the end of the old Japanese Empire and World War II and simultaneously the birth of a new Japan, rising in the east.

That photograph is the first in a collection of more than one hundred, taken in the twenty years from the end of the war 1945 to the Olympic Games 1964, by leading and emerging Japanese photographers who experienced the Metamorphosis of Japan After the War first hand.

Physically devastated and irrevocably scarred by the war experience, it fell to the photographers featured in this exhibition to observe, interrogate and illuminate the post war period for generations to come.

The exhibition carefully examines the immediate aftermath of the war with poignant and disturbing images by established photographers, Ken Domon, Ihee Kimura and Tadahiko Hayashi. We see the devastation on a personal level, with individuals in a broken landscape, surviving by will power alone; orphaned children in the lap of chaos and the evident dismay of a nation coming physically face to face with American occupation. These are fine images from the Realist Movement that became very prominent in those early post war days.

Japanese national identity was a concept in turmoil and other photographers veered away from the stark realism generally promoted, searching for a sympathetic truth in the traditions of the more mundane. Hamaya, Kimura and Tanuma photographed a people supported by strong tradition and belief, with a humane lens. The very powerful image by Hiroshi Hamaya of a woman planting rice, as generations have and continue to do, provides an anchor in those changing times, with what is a timeless image. Takeyoshi Tanuma isolating a small girl dressed to go shopping in her east west mix of clothes, is particularly poignant, as is Ihee Kimura’s women on a train, resigned to both the journey and their current lives. 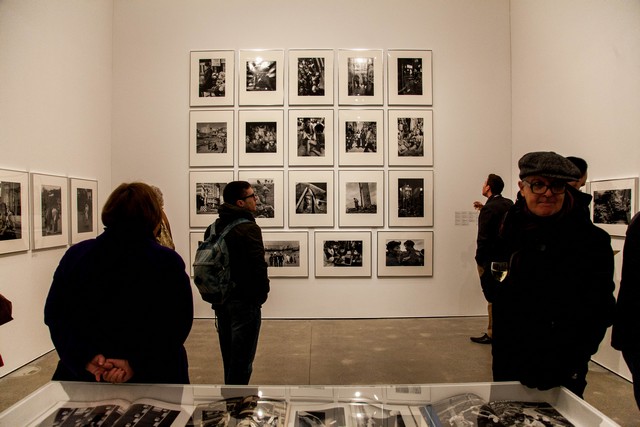 The Fifties heralded a new generation of photographers who saw realism as having peaked and were now searching for new avenues to explore the national identity issues and their personal interpretation of the changes they were witnessing. All had lived through the war and now, at a pivotal moment, were focused on the growing influence of the West on Japan and new approaches to documentary photography.

Photography in Japan was not developing in isolation but rather in tandem with film, dance, theatre, literature et al, and was closely linked by comprehensive economic and social transformation. Shigeichi Negano’s Fashion Show with its Hepburn-like model and entranced audience and Tanuma’s clash of fashion styles in the 1955 Sanja Festival (main image) underscore the tensions prevalent at the time. The fine art work of Eikoh Hosoe proved that there were barriers to be crossed and with his Ordeal by Roses images, the intention to do so. 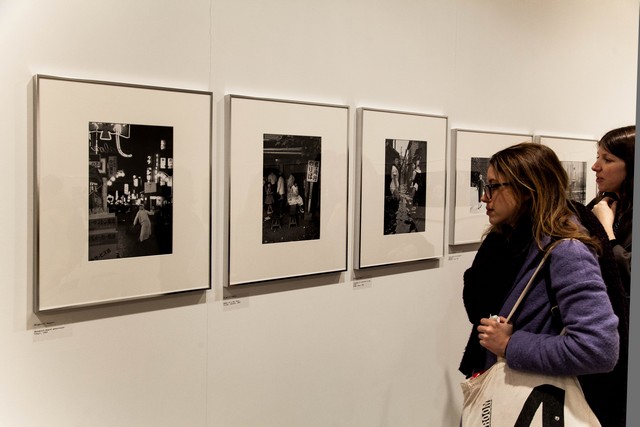 Japan was fast approaching a new destiny as a major economic power, rising literally from the ashes of the past to an industrial powerhouse of the future, taking its people, traditions and aspirations to a place few could have imagined. It is this massive and intense national reconstruction that is the bedrock of the exhibition.

Simply but impressively presented by the Open Eye Gallery, the exhibition shows only in Liverpool until 26 April when it moves to the USA. Quite a coup for Open Eye, and a rare opportunity to gain an insight into a fascinating period, both historically and artistically, of modern Japan.

The exhibition, curated by Tsugu Tada and Marc Feuste, will be on display at Open Eye Gallery until 26 April 2015.