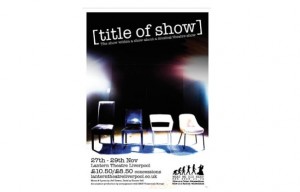 Last week at Liverpool Lantern Theatre, a brilliantly innovative and funny play graced the stage. [title of show] is a musical-cum-comedy-cum-experiment in play writing, and brought together just four actors and a pianist to act out a series of sketches.

How do you perform a play that hasn’t been written yet? This is the hilarious and intelligent premise behind [title of show], a brilliantly conceived piece of meta-theatre in which characters Jeff and Hunter, two ‘nobodies’ in New York, endeavour to create a show-stopping musical for a theatre festival. As the deadline for submissions looms they make a pact to write until the festival’s deadline and submit whatever they’ve written. As ninety minutes of pseudo-improvisation, catchy songs and hilarious situational comedy ensue, [title of show] is born. Confused? You should be.

The Tony award nominated [title of show] follows these two aspiring writers and the misadventures they encounter as they work their way towards writing, producing and finally performing their first show. The action, which mostly takes place in Hunter’s apartment, is interjected with great spotlit monologues featuring each character leaving mundane and plot-stalling messages on one of the other characters’ answering machines.

The genius in the writing is its lack of direction – by focusing on the microcosm of the apartment where the foursome rehearse, the plot follows their conversations about how to move their story forward and every word they say becomes part of the live script.

Larry (Jonas Tattersall), our unsuspecting accompanyist is at times acknowledged and at others used for providing the backing music – a fun theatrical devise which sees a constant and fluid shifting of relationships between the characters.

The male leads, played by Jamie Barfield and Jack Malone were the stars of the night, with a fast-paced and witty dialogue constantly unfolding between them. Their friends Heidi and Susan, played by Franki Burke and Ellie Gray are complete opposites when it comes to performance style and personality, but somehow the unlikely foursome pull the whole thing off, with great stage chemistry.

Original songs, situational comedy and just the right sized sprinkle of Broadway-infused aspiration – what more could you ask for?