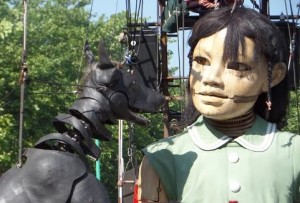 Today (25 July 2014) Liverpool was once again taken over by giant fever. They were last in the city two years ago to commemorate the sinking of the Titanic, and while they were here they won the hearts and minds of Liverpudlians and visitors alike.

Over the past 2 days there has been a mounting excitement as thousands queued for hours waiting to see the Giant Grandma sleeping in state in St George’s Hall. Out on the streets, a black car circa WWI was seen driving around blasting out instructions and blaring music. It was flanked by 3 young men on vintage cycles wearing early 20th century clothing, reminding us all that the Giants are here to mark the centenary of the beginning of WWI.

Last time the Giants came to visit I was a Benevol. This is a volunteer whose main role is to ensure spectators stay on the pavement when there are no crowd barriers. I recorded my memories on Art in Liverpool.

On Friday morning, there was an air of excitement as the Giants slept on either side of St George’s Hall. Grandma, on one side and the Little Girl Giant with her dog Xolo snuggled on her lap, on the other. The heat of the morning gave the day an unreal edge. Could it really have been like this when the outbreak of the world’s worst conflict (to that date) broke out? 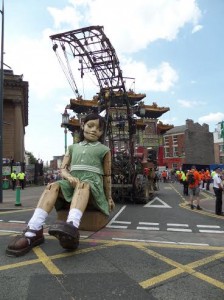 I gathered with my other Benevols in the shade of the trees behind the hall. We were given our instructions and half of us assembled by the tunnel entrance to witness the Little Girl Giant and Xolo waking up. Large crowds gathered on the edge of St John’s Gardens and some gained a bird’s eye view from the nearby flyover. The band struck up a gentle tune and the Little Girl Giant and Xolo gradually woke up. After a quick circuit of the crowd, the Giants were ready to begin the day’s adventure; today they were to walk separately until lunch time, with Xolo leading the way. I walked alongside the Little Girl Giant, keeping the enormous, friendly and cameraphone-clutching crowd out of her way.

She stopped from time to time to give young children rides on her arms, take a wee on the street (much to the consternation of another grandma in the crowd) and move on to the top of a car for a ride. This gave the Lilliputians (or puppet operators to most of us) a much needed rest. The Little Girl Giant then passed the Bombed-Out Church, where she stopped to stretch her arms. Every space on the steps of the church were taken for a vantage point, and the Chinese Arch proved the ideal resting place for a 3 hour siesta for this giant girl, with Xolo waiting for her along with the enormous crowd.

We were praised for doing a good job, and the Benevols were then allowed a much needed rest before returning to the Giants’ side for their evening journey to Newsham Park. After a 3 hour break, I went back to the Chinese Arch wondering how the story would unfold. A few of us were picked out to create a passageway to allow the return of the Lilliputians/puppeteers. We had to keep our wits about us all day, as naturally the crowds were always looking for the next best viewing point and would often try to get over onto our side of the tape. 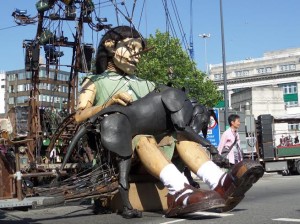 I accompanied Xolo, and led the way through Toxteth, the edge of Wavertree, Kensington and their evenings resting place in Newsham Park. Stealing the show just like in 2012, he would stop to have a drink, have a wash down with water liberally splashed over him, have a kick about with a big red ball, give rides to young children on his back and interact with the crowd. Once on a long road he had a lot of fun running up and down, much to the delight of the crowd.

Meanwhile the Little Girl Giant was following behind, lifted on top of a bus for the next part of her journey. As she was heading for Kensington I heard the news that Grandma had lost her head and that proceedings were being delayed. Finally, however, she joined the procession in Kensington and here the whole community was out on the streets, steeping themselves in the spectacle. People had waited for hours but were willing to share their experiences, and at this point a Scottish pipe marching band joined in, once again reminding me of the links to WWI.

So to a packed Newsham Park which surely has never witnessed such an event. Here I experienced a 21st century problem: my camera instead of running out of film ran out of battery power.

All of the Giants assembled in a large arena and the crowd enjoyed a poem about Giants, whilst a display of drumming took place. These drums were mounted on cars which were in turn mounted onto other cars, and Xolo ran excitedly among them. An old fashioned gramophone, Giant sized, was driven into the arena and played John Lennon’s ‘Imagine’ as the Lilliputians left to well-earned applause.

As the sun set so the crowd gradually dispersed, with two more days of Giants ahead of them. What will enfold? Who knows? I will do my best to report on the days’ proceedings.