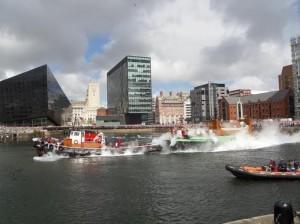 After not really knowing where Bath Street was, where we had been asked to assemble, I headed to Clarence Dock where the giants had gone to sleep. I arrived there as they were starting to move out. Clearly they were not doing a public waking up ceremony, and I discovered Bath Street was the near end of what most Liverpudlians know as the Dock Road. The procession was to start by St Nicholas church so they passed us as they went to their starting point. I was able to watch at close quarters the various faces of the Lilliputians. They were mostly relaxed but I could see them getting ready to pull on the robes that would move the giant’s feet down the Strand in front of who knows how many thousands of people. 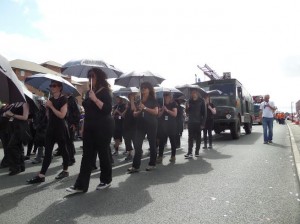 I was at the rear of the procession and behind a cannon and a massive air of cymbals operated by blue-coated Lilliputians jumping down and pulling on a rope. Masses of postcards were fired into the air. I was able to pick up those that fell on the road and hand them into the crowd. On one side was a picture of Lord Kitchener’s pointing finger with the slogan “Your country needs YOU”, whilst on the other was an extract from the speech he gave in Liverpool, which inspired local men to join the Liverpool Pals. Once again, another aspect of the creative arts was brought into the mix.

At the far entrance to the Albert Dock the Giants were taken out of their walking frames and put into giant beds ready to be put on a ship for their voyage out of Liverpool. I reflected on the idea that there is something special that relates to the human psyche when confronted with human images of a colossal size. These images are scattered throughout history and the world: the huge heads on Easter Island; the presidential heads at Mount Rushmore and giant Buddhas in Asia. Certainly the crowd emotionally responded to them as though they were living beings. People patted the dog, waved to the Grandma and cried as the Little Girl Giant and Grandma embraced on Saturday evening in Clarence Dock. 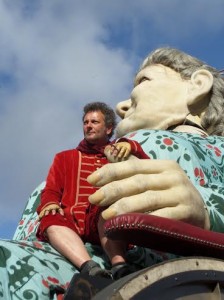 I was near the music truck with the band as we headed back along the Strand. This seemed to be the vehicle of choice for Jean-Luc Courcoult, the creative director of Royal de Luxe, the company who created the Giants. He was delightedly tapping his foot to the beat of the music and waving to the adoring crowds, and at one point picked up the microphone and shouted “We love Liverpool!” It was incredible to see that thousands and thousands of people had experienced the work of his creative team over the past five days*, and it made me think: if this creativity had occurred inside a theatre, how many shows would it take for the same number of people to see it?

I was able to get a dock side view as the Giants, watched by Xolo, were lowered onto a boat. The vessel did a circuit of Canning Dock with clouds of white vapour, created by dry ice being thrown in the water, swirling about adding to the atmosphere. They then went through the lock gates and onto the Mersey. I had one final duty of stopping a flow of spectators coming past the cranes at the dock’s edge before we were praised and thanked by Liverpool City Council and the Royal de Luxe events staff.

This was a thrilling experience for me which took me into the heart of a creative experience that brought residents and tourists together as a single emotive body. Will the Giants come back to the city for a third time to tell another story? We will have to wait and see.

*There were additional events happening on the two days leading up to the Giants starting their journey around the city.

April Ashley: Portrait of a Lady at The Museum of Liverpool