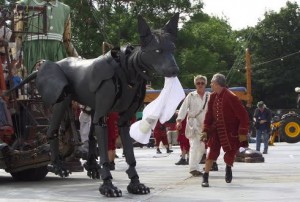 I woke up early and checked Facebook and saw there was a real buzz about what was happening in the city. I went down to Newsham Park and headed to where the Giants were resting. Walking over, I reflected on the range of large parks dotted about Liverpool and how this one with its lake and gardens is often overlooked.

A huge crowd had gathered around the arena, patiently waiting in the morning heat and sun. After a briefing some of us were allowed to sit down in front of the crowd; it was brilliant having a ring side seat for the ‘waking up’ show. The three giants were asleep with the Little Girl Giant’s gentle snoring washing over the crowd. A couple of interviews were relayed that the Royal De Luxe team had gathered from family members of people who had been killed during WWI. One gentleman kept breaking down as he was reading the last letter a soldier had written from the front before he died. Once again the purpose of the Giants’ visit was conveyed to the crowd in a sympathetic, sensitive and moving way. Each Giant then woke up; Xolo had a drink of water, the Little Girl Giant had a shower, Grandma had some whisky from a giant hip flask and a long puff on her pipe – quite a woman! Xolo even went around the arena at one stage with one of the Little Girl Giant’s socks in his mouth! All the while, the band played gentle music appropriate to the various activities. 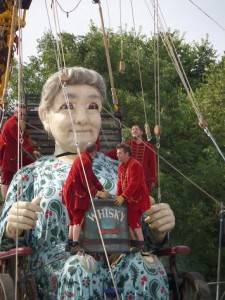 After a while a procession of Giants left the park and made their way into Kensington. Here, the local community thronged the streets as Grandma and the Little Girl Giant along with her pet dog Xolo parted company. The duo headed down towards Old Swan delighting the crowds, and once again local people had come out of their homes to witness this most wondrous of street theatre. They about-turned and headed back towards town with the Little Girl Giants giving rides to children, getting onto a giant scooter and also jumping onto the top of a bus. All the while Xolo was running around receiving pats on the head from his adoring fans.

The pair walked in procession down Islington with a mix of French and war time favourites blaring from the speakers. They arrived at Lime Street where vast crowds had gathered to welcome them – Xolo cocked his leg and did his party piece. We passed St George’s plateau where Grandma was preparing for an afternoon nap surrounded by a sea of onlookers, and headed down to the old tunnel entrance where they were to rest. The Little Girl Giant was sheltered from the blazing sun by a giant parasol which was put in place by one of the many cranes used in the proceedings, with a Lilliputian (puppeteer) perched on top of the giant umbrella. It made me wonder at the daring of the people involved and the amount of training and rehearsal that went into the show to make everything look so effortless. 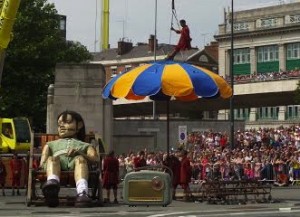 After lunch the pair made their way through the business quarter and original Seven Streets of Liverpool to meet Grandma at Mann Island. It was great being able to marvel at the architecture of this part of the city as all three giants joined together, and I along with the other people involved found ourselves in a ‘bubble’ of crash barriers. I looked around and as far as my eyes could see there were crowds in all directions. I felt I was in the heart of something really special for the city. A throng of people in unity with one another brought together by an art project of amazing proportions. The crowd stood in silence as Grandma reflected on why we were all here and how peace may be like lilies that can’t exist in a desert. At this point I was aware of the vast array of creative people involved in the company including writers and poets.

The three made their way round the three Graces, St Nicholas, the sailor’s church and onto the Dock Road to Clarence Dock. It seemed the whole of the city was following us there to see them put to sleep. Just the night before, the lullaby played to bid goodnight to the Giant family was John Lennon’s Imagine.

Look out for part 3 of Andy’s Giant adventure coming soon!

Read the diary from Day 1