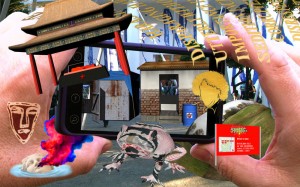 Manifest.AR is a collective of international artists working together to explore the boundaries of reality. With a commission from FACT, the team are working to develop technologies to change the way we view the world around us.

Augmented Reality, as speaker Sander Veenhof explained, refers to the invisible presence of a virtual image in space, which can be discovered by using an app on your smart or android phone. Junaio is the programme used by smart-phone owners to unlock this hidden world, and is definitely worth a look.

This group of science-inspired artists have so far created hundreds of virtual images all over the world, which come to life with the use of a screen. In their manifesto, Manifest.AR state that ‘In the 21st Century, Screens are no longer Borders’. This means that a screen does not separate us from reality as many would have us believe – it actually connects us to the world around us and enables us to interact with reality and live-art.

Veenhof presented a set of examples of the use of this technology by the collective all over the world, which were stunning and made the audience question our understanding of reality, which no doubt the artists want us to do.

In places across the planet, these artists have created images such as a giant fishbowl in a public square, paper lanterns across the worlds skies, and even an artist who brought the ‘Occupy Wall Street’ protest group back to the street after they had been moved along. All of these pieces are totally invisible to the naked eye, yet come alive once a screen is placed between the viewer and the virtual object. Some of these pieces are even more complex, allowing viewers to interact and build virtual environments, which are then visible to other users, who can add to the construction in this truly incredible technological development.

The purpose of the talk, however, was to zero-in on the educational advantages of developing such software. I actually took part in the live demonstration of the equipment which was really exciting to be a part of. Wearing a heart-rate monitor here designed to interpret my concentration levels, this information was then to be projected onto a screen via virtual images.

In this case the team experienced technical issues and the theory could not be aptly demonstrated. Veenhof’s idea, however, remains incredibly interesting and potentially integral to the classroom/lecture theatre of the future. Veenhof, aside from his artistic endeavours, is planning to  develop this software in order to make education more interactive and interesting. The experiment was intended to demonstrate how AR can be used when concentration levels start to drop: images would then be accessible via your smart phone in order to illustrate the information being broadcast, and one would be able to ‘see’ the data flying towards you. The idea is that with visual stimulation, the information becomes easier to digest, and the interactive-level allows an audience to feel part of the presentation, rather than merely spectators.

I attended the trial-run for this experiment, and cannot wait to see how the Manifest.AR team develop the technology, and potentially re-invent the way we see and interact with our world.