It’s Sunday afternoon, the morning after the night before, and things are beginning to mellow out at Worthy Farm after the immense performance from The Rolling Stones on Saturday evening.

What better way to drive away those hangover blues, than soaking up the sun and some home-grown talent in the shape of Liverpool’s very own Stealing Sheep.

The 3-piece girl group from Merseyside took The Park stage by storm in a lunch-time slot that woke the sleepy revellers from their summer daze. 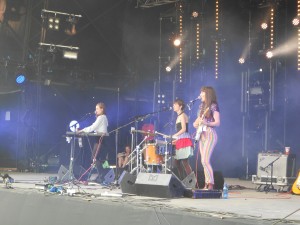 Mercer’s drumming talent is brilliantly original and innovative, with intriguing rhythms to rival Vampire Weekend’s much lauded percussion section. The group’s sound is eclectic and undeniably likeable, as are the girls themselves, with their northern charm and endearing sense of awe at being on stage at the world’s greatest music festival.

Having watched the group’s mainstream and commercially more successful LA-counterparts Haim the day before, I could not help but think that Stealing Sheep are truly the superior group: with lilting vocal harmonies, creative melodies and none of the star-spangled arrogance of the LA trio, Stealing Sheep stole plenty more hearts at Glastonbury this year.