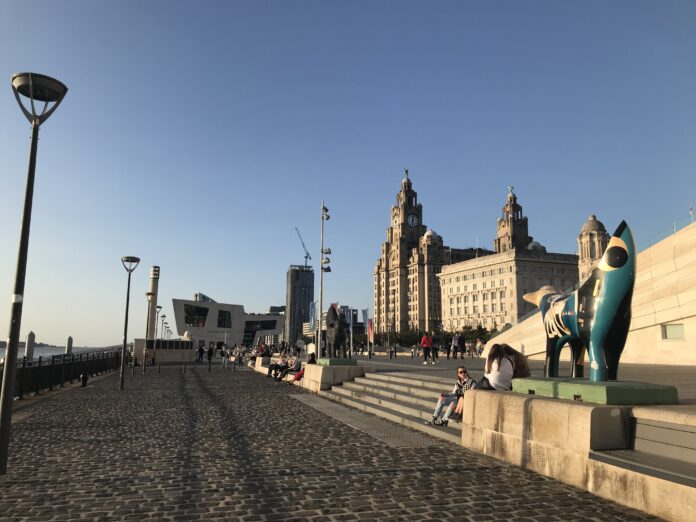 Words, Images & Trail by Bryony Large – read more of her writing at www.confessionsofanartjunkie.com

As 2021 witnessed the country go sharply into its third nationwide lockdown, we watched reluctantly as the doors of our favourite Merseyside museums and galleries closed shut. Brand new exhibitions and revelations of exciting visual art have had to be paused, making us all eager for when we can press the ‘resume’ button again.

Fortunately for the locals, the arts and culture of Liverpool have always flooded out onto the streets, so we can stumble across sculptures and street art in every turn we take. Although the restrictions limit our hobbies and pastimes, we can take some form of daily exercise, whether that be walking, biking or even roller-skating. What I am trying to say here, is that our engagement with the arts does not have to come to an abrupt halt during this lockdown and that living in Liverpool grants us the perfect opportunity to explore some spectacular outdoor artworks!

In this series, I will create accessible walking trails of art from around the city; not only will one individual trail act as a great form of daily exercise, but your eyes and mind will be kept equally as entertained.

For the first Liverpool Lockdown Treasures, I have chosen the city’s waterfront. While it was immensely challenging to narrow down the trail to just six artworks, the direction and location of this path will have your eyes darting around instinctively, due to the mass of arts and culture to be seen! Here are the six most remarkable:

The trail begins at Kings Parade in Coburg Wharf, just south of the Royal Albert Dock, where you will be met with tranquil, scenic views of the River Mersey and Birkenhead. Ready to jog into the sunset is the founder of Liverpool’s Olympic games and the city’s first Olympian, sculpted by Tom Murphy in 2019. Kensington-born John Hulley is considered to be one of the ‘Three Founding Fathers’ of the modern day Olympics, organising six of the sporting festivals in his time. This bronze statue showcases a much-appreciated campaigner of exercise and healthy living for the working classes in the 19th century, believing in bringing physical education to the masses.

In an attempt to keep our spirits high and mental wellbeing intact during this lockdown, I thought John Hulley’s motto, “Mens Sana in Corpore Sano” translating to ‘a healthy mind in a healthy body,’ was the ideal sculpture to commence our art walk. His contrapposto stance also leads us in the direction to our next Liverpool treasure.

The artist of this work can be found via https://liverpoolsculptures.co.uk/ or @tomsculpt on Twitter.

As you walk along Kings Parade towards the Royal Albert Dock, I highly recommend cutting through to the piazza outside of ACC Liverpool and the M&S Bank Arena cityside entrances. It is here where you will start to stumble across dozens of large, wooden easels propping up some incredible birds-eye views of Britain’s most intriguing landscapes and landmarks.

This free, outdoor photography exhibition is called Britain from the Air and was developed by street gallery pioneers, wecommunic8, and the Royal Geographical Society. Brecon Beacons, London’s City & Docklands and panoramas of Perth & Kinross are just some of the locations pictured and what’s more, each photo comes with its own snippet of facts and statistics so the exhibition acts as a great educational resource while infatuating our eyes. The exhibition allows us to divulge into a brand new perspective of some of the most fascinating sites of Britain’s history and culture. These enriching images trail from the piazza, past the Big Wheel and back up to the waterfront, so relinquish this trail within a trail!

If you continue to walk along the Mersey towards the bustling centre of the Royal Albert Dock, it will be quite difficult to miss the 10-metre-high, technicolour sculpture standing boldly between the Piermaster’s House and Tate Liverpool. Commissioned by the latter and Liverpool Biennial to mark their respective anniversaries, Swiss artist Ugo Rondinone’s Liverpool Mountain stands tall to mirror the eccentric and colourful nature of Merseyside’s cultural landscape. This might be Rondinone’s first public artwork in the UK but his fluorescent totemic formations can be found around the world that take part in his tradition of making sculptures using natural materials.

This artwork was inspired by naturally occurring hoodoos, which are spires or pyramids of rock, and the art of meditative rock balancing. Rondinone merges geological and abstract elements together seamlessly with Liverpool Mountain, embracing the ordinary with vibrancy, colour and zest, reflecting Liverpool’s arts scene perfectly.

The artist of this work can be found at https://ugorondinone.com/ or @ugorondinone0 on Instagram.

Walking north from Liverpool Mountain towards our next stop at the Pier Head, our eyes are blessed with numerous public artworks to engage with; Carlos Cruz-Diez’ Dazzle Ship and the varying Superlambananas are to name a few. However, one piece of art that I feel is particularly noteworthy is Andy Plant’s interactive mechanical sculpture, Heaven and Earth.

Combining a large telescope with a working hand-powered orrery, sculptor Andy Plant has created a timeless work of art to commemorate the life and work of scientific genius, Jeremiah Horrocks. Born in Liverpool in the 17th century, Jeremiah Horrocks made enormous intellectual glides for astronomy by being the first person to prove that the moon travelled around the Earth in an elliptical orbit and the first person to accurately calculate the transit of Venus.

Plant’s extensive background in sculpture and engineering helped to produce Heaven and Earth, which initially allowed for the public to watch a video animation of the life of Jeremiah Horrocks through the eyepiece. Unfortunately this feature is no longer functioning but one can access the animation here: https://twitter.com/hiddenliverpool/status/1243094126217830401. While this feature might not currently work, the sculpture’s mechanical orrery consists of a miniature copper angel depiction of Horrocks who replaces the position of Venus, orbiting around the other planets as his wings flap.

The artist of this work can be found via https://www.andyplant.co.uk/.

Turning away from the waterfront, the trail will lead you up to the Liverpool Parish Church, opposite the Mercure Atlantic Tower Hotel. Out of place and thus, immensely impactful against the Grade II listed building, sits the third installation of The Liverpool Plinth, created by Yorkshire-based sculptor Gail Dooley. The installation consists of a ceramic gannet, which is a common type of seabird in Liverpool, trapped and entangled in an array of genuine litter found on the shores of Merseyside during lockdown.

Looking out defeatedly towards the waterfront, the bird’s distressed expression demonstrates vividly the frightening dangers to marine wildlife from water pollution in the UK. In a blog entry, the artist revealed that she came up with Tidal Shame while looking through her shed and finding a pile of rubbish from beaches that she had collected for earlier work. She noted how difficult it was to detangle herself and considered how much an animal would struggle in getting out of such unnecessary debris in their own environment, at the fault of avoidable and reckless human behaviour.

The viewer’s only accessible perspective of this artwork is from below, evoking an undeniable feeling of helplessness and desire for setting the creature free – Tidal Shame is gripping, emotive and thought-provoking about the ways in which us as humans could combat the rising levels of ocean pollution, which I believe was Dooley’s focal aim of producing this work. This coincides with The Liverpool Plinth’s objective to enrich public spaces, in a similar manner to the Fourth Plinth in Trafalgar Square, London.

Tidal Shame will only be installed until July, so make sure to check it out before then. This also means that this art space, supported by the Liverpool Parish Church, the Liverpool BID company and dot-art, is open to submissions from artists working across the north of Liverpool, so if you want to communicate an important topic visually with the public like Gail Dooley, apply now: https://dot-art.co.uk/2020/01/13/sculpture-wanted-for-the-liverpool-plinth-2020/!

The artist of this work can be found via https://www.gaildooley.co.uk/.

The final stop of this public art trail is located just around the corner from our previous artwork, in the Our Lady & St. Nicholas Church garden, which I find is a great, peaceful spot to sit and look towards the docks for a much-needed breather.

It comes as no surprise that artist Tom Murphy has appeared in this trail for the second time, considering how renowned he is for his sculptures across Liverpool. Famously, Murphy sculpted the statue of John Lennon at Liverpool John Lennon Airport and Princess Diana at the Liverpool Women’s Hospital; it is fair to say that his artistic talent is unmatched.

Climbing playfully towards the sky with a toy aeroplane is a young boy being chased by his mother with a baby in her arms, asking desperately if he will come back down to safety. It is one of the more touching memorials across the waterfront as the bronze sculpture commemorates the civilians in Liverpool and Bootle who lost their lives in the bombing of the city during World War 2. The location of this work is highly impactful, with the young boy facing towards the River Mersey and the docks – the primary reason for why it was so intensively attacked. We observe Murphy’s work here to remember Liverpool’s vast history and heritage, as well as the incredible artistic talent of the city that allows for it’s reflection for the public.

These six artworks that make up this trail are among an extensive list of public artwork along Liverpool’s waterfront, which I am positive that you will come across while making this walk. This shows in itself the spectrum of public art that can be seen and explored during this lockdown to encourage our minds, bodies and eyes to stay active. As I make my way across this colourful city, I will create more walking trails for this Liverpool Lockdown Treasures series, starting in the centre before making my way to more suburban areas. The outdoor art to see in Merseyside is truly never-ending, so in a time of uncertainty and limitations, I couldn’t think of a more ideal pastime than to (safely) go out into the streets and embrace Liverpool’s arts and culture!

Words & Trail compiled by Bryony Large – read more of her writing at www.confessionsofanartjunkie.com