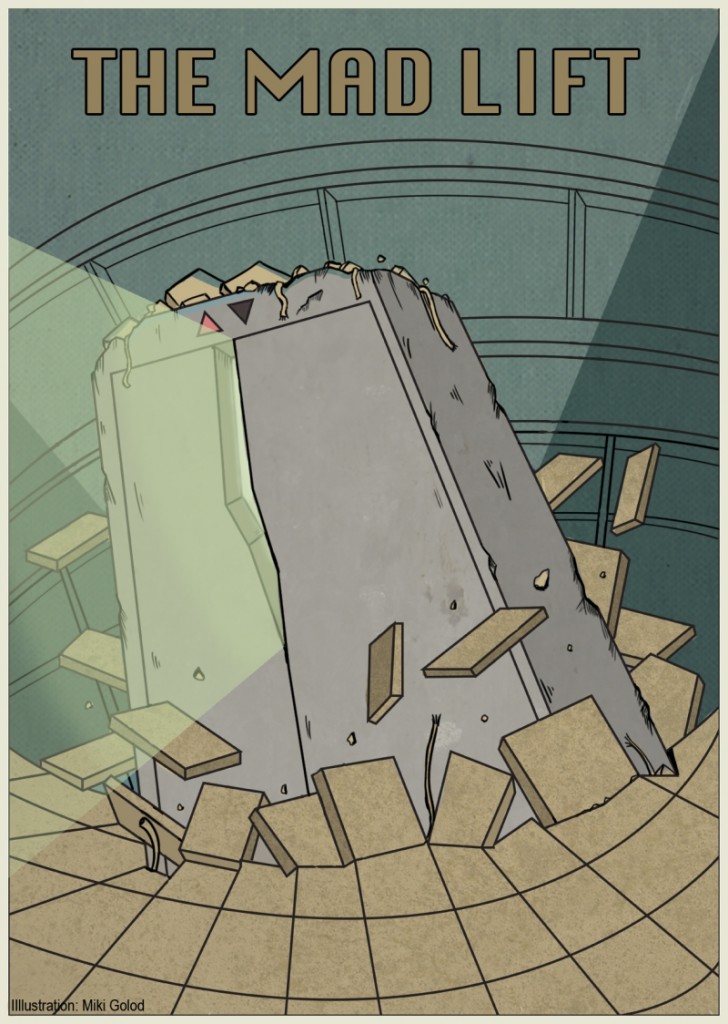 This Saturday sees a multitude of activity and art come to life in Liverpool ONE in the form of two specially commissioned pieces for Liverpool Biennial’s contribution to the London 2012 Festival.  The launch includes workshops and family oriented projects surrounding the works, in an aim to engage with more than just the art connoisseur.  This is something that this year’s Biennial intends to explore further with a comprehensive programme of family activities in place.

The first of the two artworks is Oded Hirsch’s The Lift, a powerful and cheeky disruption of the Liverpool ONE space.  Consisting of a lift literally bursting forth from the ground, it is a work that is impossible to ignore and raises questions about the use of space within city centres and consumerism.  This is Hirsch’s first public realm commission and has dark as well as light and playful connotations with the suggestion of an underground world and a natural juxtaposition to its organised and tidy surroundings.

As part of this piece, a workshop will be taking place with freelance artist Karen Green and will involve a mobile group of drawing sessions surrounding The Lift, aiming for families to interact with the work and quite literally draw their own interpretations of the work.

The second piece to be shown for the first time is Elmgreen & Dragset’s But I’m on the Guest List Too! which enters similar territory by combining the humorous with the power struggles on show all around the city.  The work is an overstated and inviting VIP door, which deconstructs the atypical scenario of entering a place of entertainment and invites the viewer in, while at the same time not allowing them through.  The door will be guarded by a bouncer, hinting at both excessive celebrity culture and elitism found within society itself.

The activity around this piece asks people to come down and take pictures of themselves with the bouncers before uploading it to various social media sites and tagging it with the #biennial2012 hashtag.  This promises to be a fun and interesting extension to the work which adds the hands on approach sometimes lost in contemporary art.

Along with all this bustling activity, Deputy Mayor Cllr. Paul Brant will be giving a speech as part of the unveiling and there will no doubt be a buzz around the area. For those eager to get stuck into this year’s Liverpool Biennial, this is set to be the perfect starter dish before the massive and innovative main course starts properly within the coming weeks.

Launch of Projects for the London 2012 Festival is on Saturday the 8th of September in Peter’s Lane, Liverpool ONE.  The launch runs from 12:00 till 14:00 and all activities are free.

The Role of the Artist: Using the Arts for Social Change

Review: Adventures in Ancient Egypt, at The Atkinson