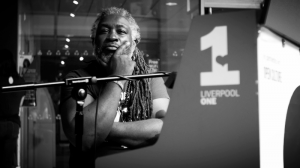 With Light Night upon us, we thought it time to catch up with a local creative to talk about what he’ll be sharing with the city. Glenn Hanstock’s award-winning documentary Tickle the Ivories explores street music in the city centre and will be showing at FACT on Friday 15 May.

Tell us about your film, Tickle the Ivories.

Tickle the Ivories is a documentary which focuses on the street piano busking festival of the same name which takes place in LiverpoolONE annually and is organised by Open Culture. Using interviews and completely live street piano performances, the film brings together a wide range of pianists from all walks of life who share a unique gift and asks why, we as human beings, are so profoundly moved by music?

Essentially, Tickle the Ivories is a selection of human stories in chapters, tied together by music. I think the key ingredient to the film’s success is its heart and passion. The film has real emotion, something more than just a combination of pretty looking images and sound.

People connect with people on a deep level. It’s how I saw Tickle the Ivories right from the beginning.

How did you get interested in film, and what was the first thing you made?

Before making Tickle the Ivories, I’d made music videos and worked on commercial commissions. Last year I made a short documentary called Small is Beautiful which gained critical praise from award winning script writer and novelist Frank Cottrell Boyce.

I became aware of the Tickle the Ivories piano festival last summer when walking through Liverpool city centre. After sitting to watch a number of the pianists playing, it suddenly hit me that the pianos themselves were responsible for drawing together unique characters from all walks of life with very different life stories to tell.

Who are your influences and favourite directors?

If you could make any film at all, what would it be and why?

That’s a difficult one. If one day I made a film anywhere near as good as Stanley Kubrick’s The Shinning, I’d be a happy man!

Lift-Off Festival was a huge success this year – tell us more about it and how you got involved.

Lift-Off International Festivals is an amazing network of festivals. Unlike many other festivals the way Lift-Off awards films included is by using an audience voting system, so, all films have an equal chance of winning when screened.

In our case because Tickle the Ivories was awarded Best Documentary, the film now progresses through the Lift-Off International circuit to screen at Lift-Off International Los Angeles, Las Vegas, Tokyo, Amsterdam and London where it will be in the running for Best Documentary and Special Mention Awards at all festivals while progressing towards the season Grand Prix Award which is award at the end of the 2015 season.

Lift-Off’s organiser James Bradley really believes and supports independent film and putting talent before technology. We really wanted Tickle the Ivories to screen at the festival, and luckily for us the film was accepted.

Would you show your work at a festival like this again in the future?

The film is up for 4 Awards at Plymouth Film Festival in May, one of which is the prestigious Roger Deakin’s Award. (Roger Deakin’s has been the Coen Brother’s director of photography for 25 years, shot Sam Mende’s Skyfall and Angelina Jolie’s Unbroken). It’s also featuring at Sheffield DocFest in June.

Light Night 2015 is this Friday – what can we look forward to at FACT?

With Tickle the Ivories being a film shot in Liverpool, I wanted to do something really special for the people of Liverpool, so there will be two exclusive free screenings at FACT on LightNight. It’s also the film’s official world premiere ahead of our screenings at Lift-Off International Las Vegas in June.

What will you be going to see on Light Night?

Fingers crossed I would like to see: The Dazzle Ship, the LJMU Degree Show, the Only in England photography exhibition at The Walker Art Gallery and Life Through The Lens Of Another at Camp and Furnace.

You can see Tickle the Ivories at FACT on Friday 15 May.