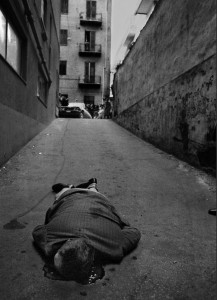 The current exhibition at the Open Eye Gallery presents the work of Sicilian photographer and photojournalist Letizia Battaglia (born in 1935 in Palermo, Sicily). During her career as a photojournalist Battaglia took over 600,000 photographs, her best known works being the documenting of the Sicilian Mafia shootings and the effects these crimes had on her hometown.

The black and white images presented in this exhibition are harrowing: shocking scenes of horror and despair with the uncensored display of dead bodies. The images on display, many repeated in smaller or larger versions, are reminiscent of police snapshots shown in films to document crimes – however, this is real life. Men are photographed laying face down in their own blood; women are shown crying in anguish. Death and dismay consumes every picture; the lack of colour in the photographs seems to reflect the lack of hope and safety the people of Palermo would have felt at the time of these images. 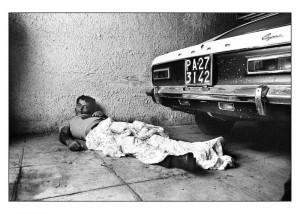 The 17 minute long video Fine Della Storia/End of the Story located in the first room is a powerful video displaying a montage of the photographs shown in the exhibition. Within this short film Battaglia is shown desperately destroying one of her photographs, tearing frantically at it with scissors, eventually resorting to using her bare hands, and finally seeming to be at peace once the image is suitably ruined. Throughout the video, suspense is built through the use of quick and lively violin music. This personal film appears to be the artist’s attempt to move forward from the horrors she has witnessed in her life.

The Open Eye Gallery provides the right amount of written information to accompany the photographs; only the titles of the works offer details of the event, allowing the viewer to humanise the victims. Two particular instances of this for me occurred in a photograph of a man who was murdered on his way to a supermarket, and in another photograph a young man who had been assassinated was lying dead on his back. The title accompanying the work informed the viewer that his twin brother was executed the next day. These disturbing uncensored images have a strong effect on the viewer as violence to this degree is not shown by everyday news media. Although there is a lack of wall text, which is the best curatorial decision in my opinion as it is unnecessary, there is a free audio guide available and a folder comprised of texts providing information about Battaglia, the Mafia, and the crimes that happened between the 1970s and early 1990s. 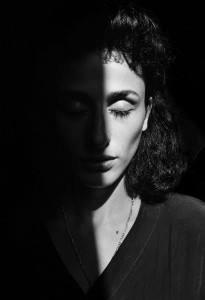 One of the most commanding pictures in the exhibition is of a portrait of Rosaria Schifani, the widow of police agent Vito. This photograph is half in light, half in darkness. This image tells the story of the pain experienced by the loved ones of those murdered. The grief consumed by Schifani is palpable, yet she is composed. This work is particularly powerful for me as Schifani’s expression is of undeniable grief, fear, anger, mourning and anguish, and all of these emotions are so intensely and effectively portrayed to the viewer even though her eyes are closed.

This is an excellent exhibition full of highly informing and thought-provoking images which speak for themselves. A significant point which occurred to me whilst at the Open Eye Gallery was how brave Letizia Battaglia was to document these brutal assassinations; the Mafia made it their mission to eliminate anybody who was against them. Politicians, prostitutes and judges are some of the many victims shown in the photographs: Battaglia is lucky to be alive.