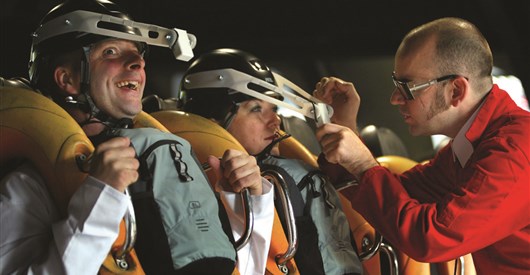 It was thrills and spills last week at FACT during the Roy Stringer Memorial Lecture, which welcomed guest speaker and “Thrill Engineer” Professor Brendan Walker to the Mersey shores – a devotee of the pursuit of happiness through his life’s work endeavouring to measure quantitatively the concept of thrill.

And his lecture Let Me Entertain You did not fail to deliver its promise, with the audience enthralled throughout an aural walk through his exciting career, documenting the many chapters in his thrill-seeking investigations, meandering through mind-controlled theme park rides via bizarre medical experiments, loop-the-looping along the horror genre, all taking off from Airphoria – Experiment Terminal 3 – A peculiar experience which emulates what happens during a fateful airline flight.

Defined as “a rapid and large increase in both pleasure and arousal”, thrill is an emotion, or rather a shift in emotion we encounter in many different ways, be it on rollercoasters, when we are panicked watching a scary movie, or even during sexual arousal. It is simply a subjective emotion that cannot be translated numerically, or can it? Walker begs to differ, having pursued the elusive equation to define and calculate thrill for over a decade. Along the way, he has enlightened potential owners of the Nissan Juke, Durex consumers and readers of the revised edition of the Joy of Sex.

And how exactly has he proposed searching for this equation? During the Festival of Thrill, his aim was to observe people on fairground attractions where they were viewed by an audience from inside a museum. By witnessing their facial expressions, hearing their “in the air” on-air reporting and attempting to capture key data looking at their heart rate versus speed, insights were gleaned as to how one might suggest quantifying the amount of thrill someone is experiencing at any given time. Although there were shortcomings in this experiment due to technological factors, the experiment did in fact offer valuable qualitative results.

Walker’s background in aeronautical engineering fed his fascination for mechanical workings and the perceived simplicity verging on chaos that they bring. Breathless was an attempt to artificially create a sensation of thrill in the mind of a willing participant who could be moved in a fixed chair. Bystanders wore gas masks and could control the chair though the harmonic frequency of their breath, removing the control from the participant and gauging their reaction. These bystanders could gain their sense of thrill through their role as voyeurs. The unnerving sound of deep breathing would also set the perfect conditions for a more jittery and exciting experience.

Walker has acted as a consultant with theme park staff, advising on the design of brand new rides, discovering the minimum depth to drop a participant to truly frighten them, which, he informs us, is 4.2 metres. His work on the Hastings Pier was intended to generate a novel way of enjoying the pier, through measuring the height of the sea at any given point to facilitate a sense of “awe”. This was inspired in part by Turner paintings and Morrison’s 1950s equation to determine the power of the sea.

This generation of experiences to “elicit emotions” was further honed in Self-Examination where contestants had special procedures conducted on them. The data output recorded their anxiety levels and responses to fearful situations and was viewed by a studio audience. He selected participants who were “disinhibited” and “easy to scare”, the favoured personality types of reality TV show producers.

His ability to “manufacture thrill” even went as far as creating the show Experiment+ Live  in much the same vain as Most Haunted where he monitored reactions of the show’s contestants, who believed they were investigating paranormal activity in a local café. Walker went as far as getting a completely fictitious spectre, “The Sobbing Boy” into the National Paranormal Database through bogus testimonials and spoof newspaper articles. Imagine adding this to your Linked In profile? This lent a sense of credibility to the experiment so the contestants and the cinema-viewing audience thought they were participating in a genuine investigation.

As a departure from the idea of being thrilled as a passive experience, Neurosis gave the agency to the participant, involving the implementation of a ride that was brain-controlled and employed the Oculus Rift, a virtual reality headset. Over one weekend, 100 participants were invited to indulge in this new attraction, which enabled them to decide their own trajectory during the ride. Sheffield’s Doc Fest caught on to this, and received their own lo-fi version of the brain-controlled thrill ride in the form of Oscillate, a child’s swing where participants were encouraged to go higher and higher to enhance their experience using the VR headset. Observers were only able to witness the person swinging and showing signs of fear and agitation due to the perceived activity from within the VR device.

As fun as all this clearly has been for Professor and participants alike, how can the study of entertainment be justified as a worthy area of research? Walker’s rationale is that thrill is sudden elation, which brings a person out of a negative state such as fear via a sense of release, transferring them to heightened emotions that are equated with happiness. Happiness is now a factor that the UN uses to measure a country’s quality of life for its citizens, and finding ways to quantify happiness will in turn lead to a better understanding of how to increase it. If this can be achieved through a combination of art and science, and participants can enjoy moments along the way, then artificially manufacturing “thrilling” experiences is surely a valuable mission for humanity.

This lecture took place at FACT on 6 November. To find out what else is coming up at the gallery, visit fact.co.uk. Find out more about Walker at thrilllaboratory.com