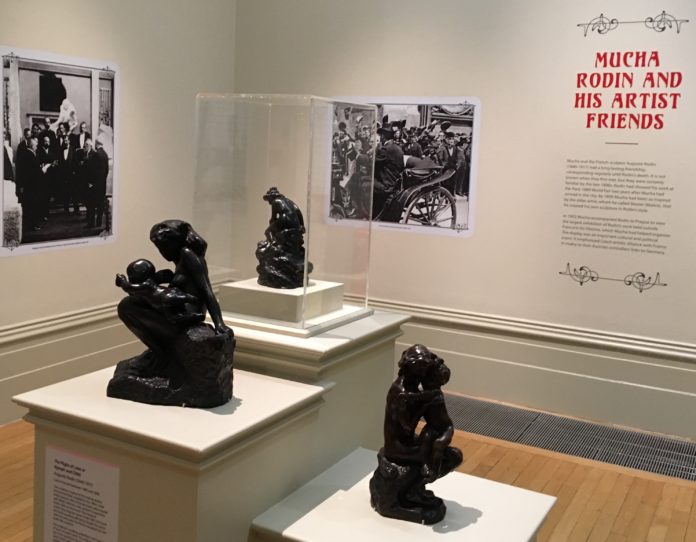 This lecture was one of a series of events accompanying the critically acclaimed ‘Alphonse Mucha: A Quest for Beauty’ exhibition at Walker Art Gallery exploring various themes emerging from the exhibition.

Heralded as the ‘greatest decorative painter’ that ever lived, Mucha was a very active character in the Parisian Art Scene when he met Auguste Rodin.

Rodin, at the time, was emerging as a considerable force in the modern art world and Mucha was very taken with him.

As I approached the lecture theatre about half an hour before the start, I met a charming lady called Diane who was perplexed about the room doors being very firmly shut and locked (although we were both very early!). So, we decided to decant and enjoy coffee and cake in the Gallery Café whilst we waited for the doors to open. Here we met two more of her party: Margaret and her sister Fi. Three adorable ladies, all of whom were singing the praises of the exhibition and the benefits of National Museum Membership Scheme. Great NML ambassadors! They told me of their art international art adventures, and I wished I could have recorded the conversation as it was quite fascinating.

Following this delightful interlude, we made our way to the Rex Makin Lecture Theatre and I squirreled myself away to listen to Ms Penketh’s lecture.

So, what did I learn?

I enjoyed listening to the stories in this lecture and it inspired me to find out more by visiting the main exhibition, and I’m so glad I did as it is a very beautiful display which draws interesting links with Paul Gaugin, Sarah Bernhardt, Eduard Burne-Jones and 1960s pop art in general. Also on show are projections of the Slav Epic, and some small bronzes by Rodin, illustrating the content of the lecture we had just heard.

It is impressive to see how influential an artist Mucha was, and still is: arguably still the ‘Greatest Decorative Artist in the World’.

The next and final lecture in this series explores ‘’The Della Robbia Pottery, Birkenhead’s contribution to the Arts & Crafts Movement’ on 11 October 2017, 11am at the Rex Makin Lecture Theatre.

‘Alphonse Mucha: In Quest of Beauty’ exhibition runs until October 2017

Review: Roxy Topia and Paddy Gould: Got Worms? at A Small...