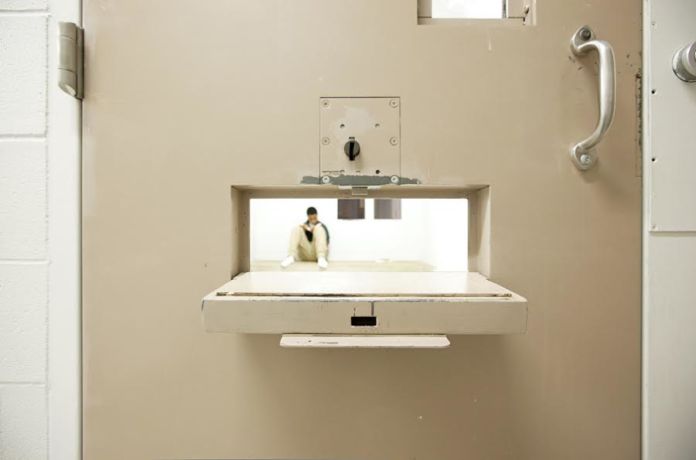 Secluded appropriately upstairs away from the other exhibiting artists is a selection of images from Richard Ross’ comprehensive study of incarcerated minors in the US, Juvenile in Justice, showing as part of Open 1. By casting the work out upstairs and giving it its own space, the curator allows the viewer to enter this world of unremitting, institutional lights, carefully echoing the imprisoning world the pictures depict.

Pinned simply like posters that might appear in the cells of yesteryear, when health and safety were merely embryonic, the images benefit from this silent, unobtrusive curation – each of them supported by the background stories of the imprisoned children, most of them involving some degree of parental neglect whether through chaotic lifestyles (drug addiction etc) or actual physical or sexual abuse. 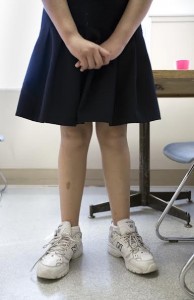 Ross protests that in his earlier career (photographing architecture, museums) he photographed too many beautiful things, his implication being that he wasn’t concerned with effecting social change. In fact, I would argue, it was time well-spent. A lesser photographer would not have the necessary unflinching eye to present these realities in such a visually harmonious way. It is precisely because of the pictures’ clean, editorial edge that we can look in the first place. If these images had no testimonial evidence, you’d be forgiven for thinking they were straight out of a film – posters promoting a serious, arthouse film such as Hunger by Steve McQueen or Elephant by Gus van Sant. Either that or fashion pictures straight out of i-D magazine.

In one of the testimonies, J, 16 tells us he is in his segregation cell – ‘I spend all day and night in here. No mattress, no sheets, and I get all my meals through this slot.’ All we can see in the accompanying picture is a locked door with an open flap, and through it, sits J, in the distance, on a cold, uninviting floor.

A young Caucasian girl, photographed just from the waist down smacks of vulnerability with her overly big New Balance trainers, her right trainer’s laces slightly undone, her oversized skirt and her hands awkwardly clasping each other. Caption-less, she could just be at school, but in fact she as at Maryvale, an all-girl correctional facility in Rosemead, California. 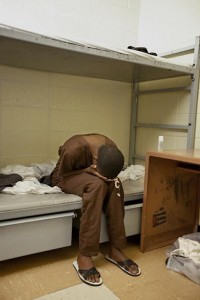 In one particular photograph, a tall sixteen year old African-American boy perches uncomfortably at the edge of a bottom bunk bed, his overgrown adolescent feet peeping out of his flip-flops while he buries his head in his lap. Above him, the words scratched into the bunk bed’s frame speak of the isolation experienced by these children ‘madre mia la amo para siempre’ (‘mother of mine, I will love you always’). Behind him the unmade sheets hint at the fact there is no mother present to scold him, while a cartoonish depiction of the Palestinian flag adorns the old, wooden cupboard.

Most of the walls in the images are clinically white but in one image, inhabited by a 12 year old African American boy, the walls are a messy, muddy brown. The graffiti on the only white wall shows child-like depictions of aliens, and the boy faces these scribblings, perhaps because they provide a welcome escape from such dismal, basic surroundings.  In another visually cluttered picture, a 17 year old Hispanic inmate’s lunch made up of sandwich, apple and juice lurks perilously close to the toilet. Perhaps these busier pictures serve to offset the cleaner, more minimal pictures and offer a realism to the document it might have otherwise lacked. 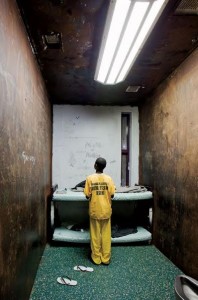 Juvenile in Justice is part of a comprehensive study Richard Ross has undertaken visiting 1,000 children detained across over 250 correctional facilities in 31 states – work that includes photographs, websites, film, audio interviews. There is something very powerful in just encountering the still images and their supporting background texts. The commodification of art for consumption means visitors to galleries often don’t spend much time looking at work on gallery walls. Encounters with these images are different. Visitors repeatedly come up the stairs laughing or talking, and looking at Ross’ work audibly disrupts their banter as they spend a significant amount of time reading the texts and looking at the images. It is in this silence, that these pictures shriek and are forensically examined.

Art in Liverpool at ANDFair 2013