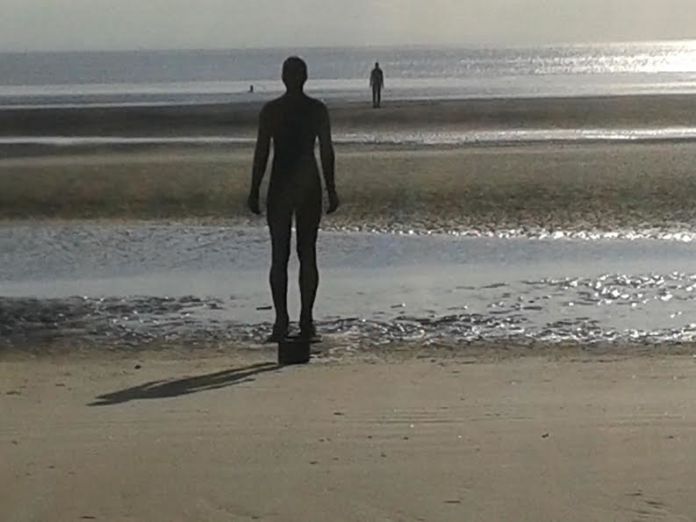 Words and images by Lesley VandeMark

One hundred naked men on a beach.

Now that I have your attention…

I attended a sold out evening at St. Georges Hall last Monday, when broadcaster Tim Marlow interviewed Antony Gormley, the artist behind the widely known ‘Iron Men’ of Crosby. The 100 cast statues that grace the stretch of beach from Waterloo to Crosby have lined the shore for ten years now, and the work, known as Another Place is his unique and thought provoking creation.

Antony Gormley talked very candidly about his original inspiration behind Another Place and his feelings now, ten years later. ‘I don’t feel as if they belong to me anymore, they belong to the people of Merseyside’ he commented. Apparently the feeling is mutual. In 2006, a year after their appearance on the beach, Sefton Council decided that it was time for the Iron Men to go because of health and safety concerns. The people of Merseyside thought differently and in 2007 it was agreed by local authorities that they would remain a permanent part of the Crosby seascape. Now, ten years later it appears that these ‘iron gentlemen’ have achieved the purpose for which they were originally intended. 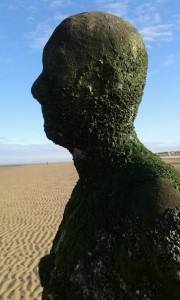 ‘They are an invitation to participate…. immerse yourself in a time and place that is not about ‘watch time.’ Gormley says. And people from all over the world come here to do just that. He went on to discuss how visitors have their photos taken with the figures and how each individual will take something different away from his or her visit, depending on their mood or their frame of mind when they come.

Gormley suggests we ask ourselves some profound questions. What is a human being? What is it like to actually inhabit or possess a human body, and what is our relation to time? I had to stop and think – there are no right or wrong answers, but there is something we all have in common. We all inhabit a human body. So, what does it mean to be human? One can only ponder the possible answers to these questions and gaze out across the water, reflecting as our iron friends have done for 10 years.

The statues were cast from 17 separate moulds of the artist’s own body. He explained that each mould was made with a subtle difference, which was something that I had not realised before. The shoulders may be angled slightly or the position of the arms might be marginally different, and because the figures are placed so far apart, it would be almost impossible to detect these differences. Perhaps this signifies the subtle (and sometimes not so subtle) differences between us all. One thing we have in common it seems, according to Gormley, is the human need and desire to touch and make. ‘We are all Makers’ he remarked. There is no doubt in my mind that this is true. Some of us may be considered ‘more creative’, expressing ourselves through the arts or with our words, but we all create. We create or ‘make’ decisions and fabricate dreams and plans. We build cities, create children, make love, and fabricate war. 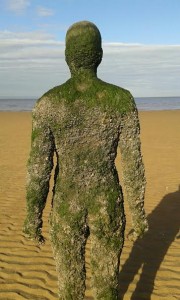 Antony Gormley describes the figures as ‘bridges to the unknown’. I ventured down to Crosby beach early the following morning – I needed to see if my perception of these iron men had changed or evolved as a result of hearing the artist put his artistic vision into words. Gormley mentioned that when the figures were first created, people perceived him as being narcissistic; after all, why would anyone want 100 copies made of themselves? But Antony saw it more as ‘total emersion of his body’ in the art form, and saw the experimental nature of the exhibit; not as a picture, nor as an object like in a conventional gallery, but more of a place, Another Place that would eventually serve as an invitation for people to come and inhabit the space for years to come.

What changed for me was my perception of the passing of time, I had never looked at the men in this way before. I walked from one to another; one was now buried to his waist in sand, one sported a blue and white shirt knotted around his shoulders and those closest to the waters’ edge were crusted with salt and algae. Time had weathered them, changed them on the surface, but underneath they were still the same as they were the day they were created. Pretty much like all of us; time has changed our outward appearance, but there is still that same original thread, a small child that exists in all of us. 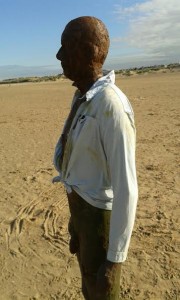 Ironically, I met an elderly man on the beach that morning, walking his two dogs. We exchanged greetings and chatted. He wanted to know what brought me here so early in the morning when clearly, I didn’t have a dog. When I told him about the event the previous evening at St. George’s Hall he off-handedly replied, ‘Oh, that fellow, the one that really likes himself! He put all these statues of himself here for everyone to see…’

What can I say? As Gormley so perceptively recognises, ‘the experience’ will be different for each person who visits the beach. But you need to come, come and just be present in the moment. You never know what may happen……

There is currently an exhibition of Antony Gormley’s work on in Southport until September. Another Place at Crosby Beach can be seen daily throughout the year. More info can be found at visitliverpool.com