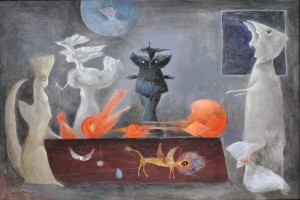 If I could be painting, any painting, I’d choose to be a Leonora Carrington painting; colourful, imaginative, and yet somewhat cryptic and always open to interpretation.

Carrington’s personal life is as intriguing as her work. Born in 1917 to a wealthy family in Northern England, she cast aside her upper class existence for an exotic lifestyle in Mexico and the love of a married man, fellow surrealist painter Max Ernst.

My journey through the current exhibition of her work at Tate Liverpool led me through a world where nothing is as it seems and anything is possible. Creatures; half man and half animal parade across canvasses and leak onto the pages of her poems and short stories. She was a mysterious woman of many talents creating art, not only on canvas but in the form of costumes, masks, dolls and murals.

Many of Carrington’s paintings were notably influenced by Mayan culture, her love of animals and her preoccupation with the after-life. The Mexican Feast Day, ‘Day of the Dead’, (held each year around the same time as our Halloween) is a celebration of those who have passed into the next life also figures prominently. Carrington challenges conventional religious beliefs in her visual interpretation of scripture and suggests that there exists a middle dimension between life and death. In her painting Evening Conference (1949), as the title suggests, creatures resembling humans but with animal characteristics gather in a circle, séance style to make contact with the after-life. At the time that this was painted, this subject matter would have been quite controversial within the church.

The most surprising of her works for me, was a collection of black and white photographs she calls, Ode to Necrophilia. It is surprising; not because of its scandalous implications, but because of its profound insight. Carrington herself poses nude in these, photographed from the rear, sitting on the edge of a bed, a death mask lying on the pillow and a human shape occupying the bed is implied. Although open to interpretation, it strongly suggests the close and intimate relationship that exists between ourselves and the dearly departed.

Quite in keeping with the approach of Easter, is Carrington’s hidden ‘egg theme’. The egg is seen as a symbol of life, and in virtually every one of Leonora Carrington’s paintings and drawings, can be found an egg. Sometimes as the main subject, as in her painting The Giantess, Guardian of the Egg (1947) but more often hidden in the background for the viewer to discover. 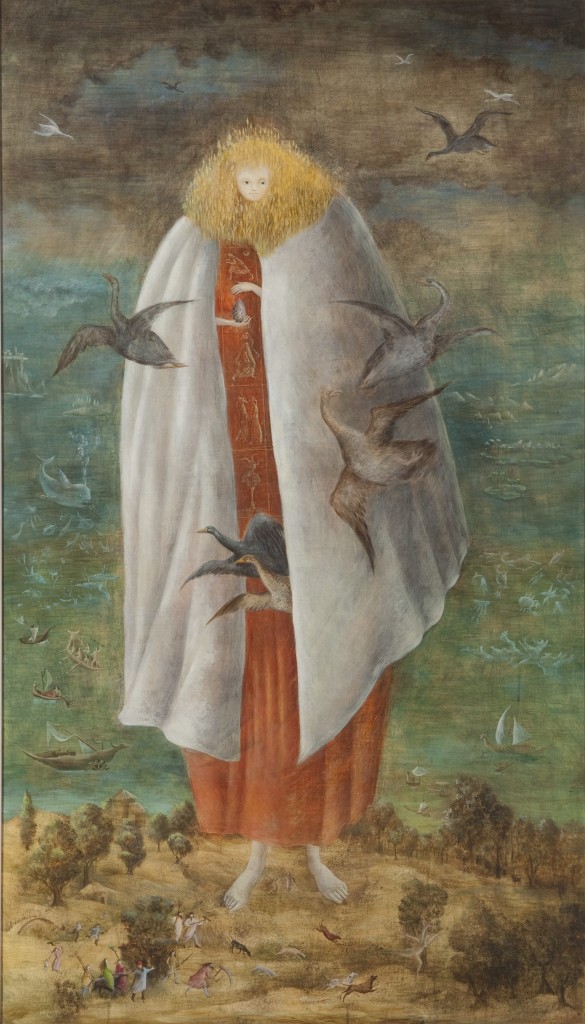 Witches, fairies, dragons and mythological creatures all come to life at Tate Liverpool this Spring. The art work of Leonora Carrington is magical and inspirational. I paused to sit on a bench in front of her impressive 2130 x 4570mm mural The Magical World of the Mayas (1963). This is perhaps her greatest work. It seems to incorporate all of her thoughts throughout the years, culminating in one great performance on a canvas. There is such attention to detail, such vivid colour and so much going on within its borders that I became lost in its landscape.

Leonora Carrington makes me want to pull out my paint brushes that stand covered in dust. Unfortunately for us, she passed away in 2011 at the age of 94. What I wouldn’t give to sit down and talk to her over a bottle of wine….

‘We distinguish life from death, but in my opinion things are not how they are explained to us. I believe they are different for each person, like dreams…..’  (Leonora Carrington)

The Leonora Carrington exhibition will remain on display at Tate Liverpool until 31 May 2015.