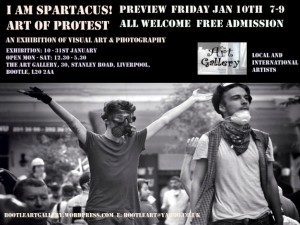 A short drive out of Liverpool city centre and nestled amongst the shops along the main road is ” The Bootle Art Gallery “.

We were greeted in the gallery by Alice Lenkiewicz who along with one of her colleagues gave us an insight into their new creative space and their ideas for bringing the artists and the community together. Alice went on to talk about the I am Spartacus project which was a mix of very powerful images and paintings detailing the common people’s struggle against injustice.
Alice says of the exhibition  ”I am Spartacus is an exhibition of protest art by local and international artists. In these very difficult times of austerity, violence, lack of equality and compassion, it is important for artists to express their thoughts and feelings now! I am Spartacus looks at the battles being fought, in order to find justice and to express alternative ways of thinking and living other than mainstream or oppressive world views from small groups of people to governments. This exhibition looks at changes taking place. Artists express their beliefs without apathy. The time has come for change!”
The photography for me as an amateur, who spends most of his time in photography galleries and exhibitions, was some of the best I have seen and captures the tensions and injustices felt by both sides. Be it protestor or police the story contained within the images came through well. The paintings in the exhibition also caught the mood of some parts of society that seem to be bearing the brunt of the downturn which again provoked and stirred feelings of a certain injustice being handed out in government policy at the moment.
Advertisement

Memories of August 1914: Day One of My Giant Journey