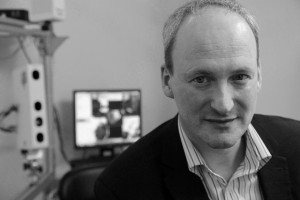 FACT are currently hosting an important data gathering installation that will contribute towards the creation of a vital tool in the future planning and assessment of the specific needs of patients with congenital skull abnormalities.

Inspired by Christian Duncan, the lead consultant plastic and reconstructive surgeon at Alder Hey Hospital, and since 2010 the clinical lead of the Merseyside Supra-Regional Craniofacial  Team, volunteers are being photographed to build an eventual model of the average skull. As Duncan explains, “…there are ways of measuring skulls and this can be as easy or as complicated as you like. The easy ones are not particularly useful as outcome measures and the more complicated way of doing it is too complicated for the out-patient environment.”

With the developing 3D technology available and the vision to see what it would look like if it were good, Duncan has initiated a process that will provide a vital insight into the impact high risk craniofacial surgery has and how successful it has been and whether there might be better alternatives. Having gained the funding to finance a 5 pod 3D Camera System that creates images of the skull by simultaneously taking five ultra high fidelity images that build a 3D representation providing essential data for the research. the project gained pace. 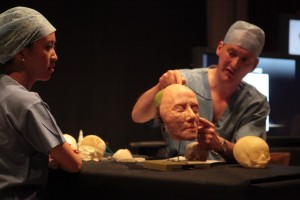 A valid tool will allow the comparison of pre-ops with the average to assess  how much work needs to be done. It will help to demonstrate that minor surgery on someone within the normal range may not be beneficial. As Duncan made clear, “…surgery is a relatively crude thing to do and does not function within the very fine tolerance that people expect.” He is excited by its possible use as a tool for managing patient expectation or for comparing different surgeries. Duncan was candid about surgical concerns for conditions where there are many ops. described as it always meant that none of them work.

A leader in the field dealing with Craniosynthosis, Orbital Dystopia and Complex Craniofacial Clefting, Duncan is clearly optimistic that the project currently in FACT will make a positive impact on craniofacial surgery in the future.

Parallel interest from geneticists in Oxford researching the human genome expands a whole forensic / anthropological dimension examining human migration patterns. A further research project linked to Duncan’s team are seeking to develop a mathematical model of how the skull grows. Duncan concluded that “like all tools its success or failure will depend on how imaginative we are and how we use it….the tool I want to develop is quite literally where I could take an age matched set of adults from the database, unrelated people, a few hundred men and women in a certain age range, define the average, print it up as an acrylic block and say right…that’s your average; aim at that! Whatever surgery you do, that’s the outcome that you want.” 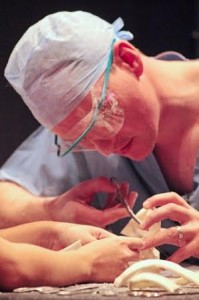 In addition to the data installation, Christian Duncan gave a fascinating insight into the world of craniofacial surgery with a world first demonstration for a live audience of a surgical process carried out on a 3D printed acrylic skull, intended to demystify the process….”this craniofacial surgery malarkey is actually carpentry in a very odd environment.”