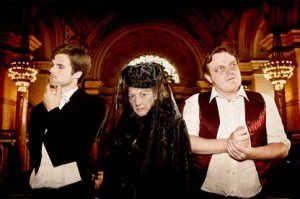 For those wishing to shun the fancy dress and commerical drudgery of all Hallows, St George’s Hall tonight hosted a Halloween spectacular: a murder mystery with a gripping local twist.

Over 250 guests were invited to take part in tonight’s murder mystery challenge, as the audience played sleuth to the cast of undead actors. Love History and St George’s Hall partnered up to host this terrifying performance, and Art in Liverpool was invited along to test our detective skills…

The evening kicked off to a spooky start, as a ghost butler invited us to take our seats as the cast entered the room.  Although some of the audience (myself included) recognised the Game of Thrones theme tune echoing around the hallowed hall, the rest were enraptured as the ghostly assemblage took their places in the great hall. Characters for the evening included Liverpool’s infamous ‘Black Widows’ as well as the first woman to be hanged at Walton Prison, Elizabeth Berry and the potential murderess of the suspected Jack the Ripper, Florence Maybrick.

Proceedings began with an introduction, where each character was presented and forced to discover why it was they had been brought back to the world of the living in 2013. Historical writer James Campbell had been murdered, and the deceased in attendance were among the suspects.

Following this, the performance broke off for the arrival of the first of our three course meal (included in the evening’s ticket price of £38). For starters, came a soup of Pumpkin and Paprika, which was flavoursome, smoky and very festive. I had been hoping that the performance would resume between courses, with an interlude for the main course and then again for dessert, but instead we were left to our own devices as we were served each course one after the other, with time to discuss what we had learned about each character so far.

The food was all lovely (chicken and mash for the main, with a pumpkin and mixed vegetable cannelloni for the vegetarians, and chocolate brownie for dessert), however, I think most would agree that the performance would have worked best split between each course. Instead, we were faced with a series of interrogations of each character by the jury at the end of our meal, which was a lot to take in all in one go, and would have been more effective had it been spread out as multiple separate trials.

The stories of each character, however, were fascinating and were made even more so by the fact that each was the true story of a local man or woman during the nineteenth century – one (Florence Maybrick) had even been tried in the room adjacent to the great hall, which sent a shiver down the spine. It was thrilling to learn so much about our city’s criminal history in one evening, and to learn that one of the possible candidates for the infamous and deadly Jack the Ripper may have been from up north!

Unfortunately, some of the sound arrangements did not quite work in the vast hall, and a couple of the actors boasted run of the mill performances. However, special mention must go to the actors playing James Maybrick (Andrew Welsh) , James Berry (Mycroft Milverton) and also the Black Widows (Lorraine Fear and Kathryn Rigby) who all stood out with excellent and memorable performances. The make up and costume were equally excellent, and the inventive lighting worked beautifully within the architecture of the room.

The setting of St George’s Hall, all lit up in greens and deep pinks for Halloween, was utterly breath-taking, with the great hall acting as both stage and dining room to the actors and guests. Love History could not have chosen a more perfect venue for such an event, and this can truly be called a Halloween to remember.

Sadly, we did not manage to guess the correct culprit, but as a whole, the evening was an excellent way to spend Halloween, and speaking to the Hall Manager at St George’s, Art in Liverpool can exclusively reveal that many more similar events are being planned for 2014, so watch this space!

With thanks to Bill Elms, Jenny Morgan, Love History and all the team at St George’s Hall.